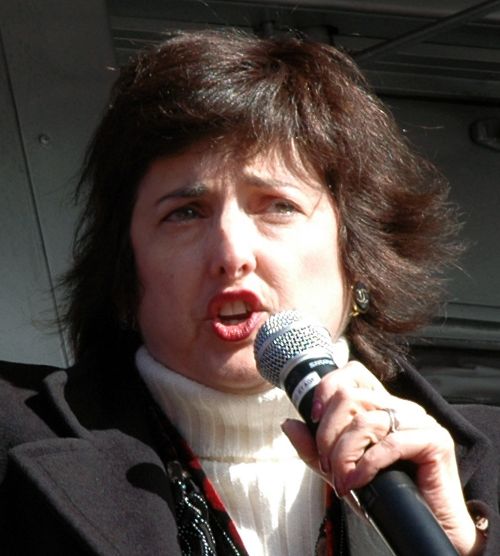 I have many fond memories of Deborah Senn, who died earlier this month of pancreatic cancer. I start with 1994 and the scene was one of Seattle’s most popular annual events, the Metropolitan Democratic Club Follies. Showstopper that night was the on-stage arrival of an arresting figure clad in a black motorcycle jacket, miniscule miniskirt, and black fishnet hose.

The home-town audience delightedly recognized the actor: state insurance commissioner Deborah Senn. Appropriately clad for action, the commissioner launched into a musical duel, the melody borrowed from Gilbert and Sullivan’s “The Mikado.” Her musical opponents: Attorney General Christine Gregoire and Lands Commissioner Jennifer Belcher. It was an evening worth reporting.

Deborah Senn had a remarkable journey, part of the first wave of women elected statewide in 1992. Senn made headlines with her hard-charging ways, made life better for people seeking health care and often made the Seattle Times columns I was then writing. Looking back through old clips and archives, I found stories, anecdotes, and quotes galore from the woman we affectionately called “The Commish.”

Take the incident on August 5, 2002, when Senn, although an active hiker, skier, and cyclist, careened off her bicycle, did a header and landed just short of Seward Park. An ambulance carried her to Harborview where the admitting nurse, recognizing Senn, said she was “just in time — there’s a waiting room full of people with insurance problems.”

By the time Senn’s accident made my column the former commissioner was healing, no longer confronted by fellow patients who remembered the Commish’s success helping ordinary people in need. She’d gotten repayments from over-charging insurance providers and secured health insurance for hard-to-insure Holocaust survivors and domestic violence victims. Consumer advocate Ralph Nader once called Senn “the best insurance commissioner in the United States, hands down.”

In another anecdote, Senn teamed with celebrity guest comedian Al Franken at the Sept. 14, 2001 Planned Parenthood luncheon. Franken (not yet a senator) told the audience it was “nice to be back in Seattle when it’s not raining — which was today.” Then it fell to Senn to give an impassioned “checkbook speech.” She urged luncheon guests to contribute — generously — to the cause. One strategy: “Cancel all your lay-away orders, instead send the money to Planned Parenthood.” Senn added, “I just talked to my husband (Rudi Bertsche). He’s now the guy who’s going without socks for the next seven weeks.”

Next I came across a January 1999 column reporting that Senn had been spotted sporting a plaster cast on her left arm. Turns out she’d been skiing at Crystal Mountain and had the misfortune of colliding with a first-time snowboarder. While she lay sprawled in the snow, awaiting help, the clumsy snowboarder added insult to injury. He stooped low beside her to offer a conciliatory cigarette.

That same year, Senn was picked by Washington Law and Politics magazine as one of the state’s two dozen most powerful women.” She shared advice along with a panel of power women during a City Club forum. “Taking risks is crucial,” she explained. She said she’d once taken an occupational test to gauge risk-taking. The result: “The guy administering the test said, ‘In your age group, you should be dead already.'”

During and after her years as insurance commissioner, Senn was frequently in the news, “mentioned” as a possible candidate for high level offices such as governor. After she lost to Maria Cantwell in the 2000 Democratic primary (missing a chance to oppose Sen. Slade Gorton), she was asked if she was “enjoying life after politics.” Her plucky response: “And life before politics.”

Senn still wasn’t finished with electoral politics. In 2004 she ran and narrowly defeated Seattle city attorney Mark Sidran in the Democratic primary for state Attorney General. However, she later lost to Republican Rob McKenna in the general election. The U.S. Chamber of Commerce, fearing election of a proven consumer advocate, contributed $1.5 million to assure Senn’s defeat.

Senn continued to enliven many an event with her wit, her humor, and her unyielding stance on behalf of social justice. She wrote a humorous one-person play (“Until the Last Dog Dies”) all about her election loss. As Senn said, “Scratch a lawyer and you’ll find a script for a movie.”

In so-called “retirement,” Senn resumed her law practice and worked as a consultant with the U.S. Department of Treasury, helping emerging democracies craft health care regulations. She also taught health care law at her alma mater, Loyola University. Long will she be remembered for her flamboyant style, fishnet hose, socksless husband and more.

Jean Godden
Jean Godden wrote columns first for the Seattle Post-Intelligencer and late for the Seattle Times. In 2002, she quit to run for City Council where she served for 12 years. Since then she published a book of city stories titled “Citizen Jean.” She is now co-host of The Bridge aired on community station KMGP at 101.1 FM. You can email tips and comments to Jean at jgodden@blarg.net.
Previous article
The Great Western Migration Story: Ezra Meeker and the Oregon Trail
Next article
Biden’s Energy Policy Dance: Swarmed from All Sides