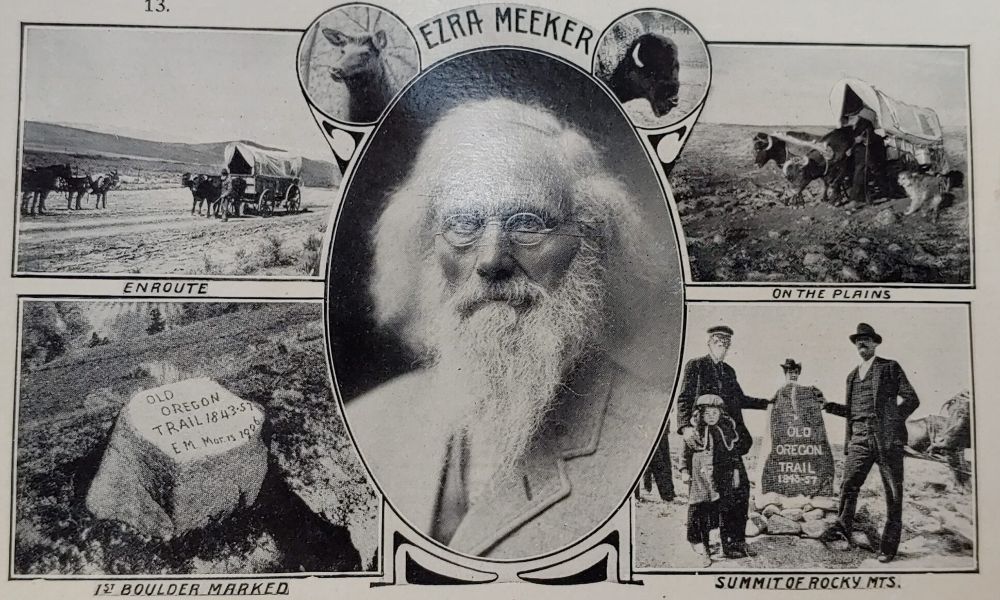 In 1922, Ezra Manning Meeker, pioneer, writer, community leader, and former president of the Pioneer Association of the State of Washington (1887), founded the Oregon Trail Memorial Association.  His goal was to remind Americans and others that the great western migration of the North American continent – often referred to as the Oregon Trail – was central to the rise of a new American civilization. Meeker was central to the rise of that legendary Exodus story.

When Meeker undertook his own trip on the Trail, he was following Thomas Jefferson’s dream – an American path from East to West.  The Trail – actually many related routes – had been previously explored by Mountain Men in search of furs, followed by the establishment of fur trading posts (notably John Jacob Astor’s Astoria) and religious missions (notably at The Dalles and Walla Walla).

In 1850, Congress passed the Donation Land Act, which guaranteed free land to pioneers in the Pacific Northwest who established claims, cleared their marked property, and then applied to the Patent Office.  (The unstated robbery was that the advertised “free” land was actually the realm of Natives, who for thousands of years had roamed these precincts and never transferred “title” to anyone.)

Soon after Euro-American explorations, this new open country was dotted with small settlements of farmers, miners, fishers, and woodsmen.  This confusing, raw activity in the American West drew the attention of other countries.  Claims and counterclaims soon arose to this green, mostly fertile region by Great Britain, Russia, Spain, and the United States (the French looked it over but passed). Eventually the U.S. eventually won the argument by having Americans on the ground at key locations.

As a young man Ezra Meeker helped drive an ox team from Missouri to Oregon in 1852.  Once the Meeker family was established – specifically in the Washington Territorial village of Puyallup – young Ezra planted hops for flavoring beer.  That business made him wealthy, until aphids infested his crop.  After he lost everything, he turned to other projects, including trips to the Klondike gold fields, farming, clearing land, selling vegetables, and opening a general store.  Meeker also held public office, becoming the first mayor and the first postmaster of Puyallup.

In 1906-1908, when he was in his 70s, he undertook a nostalgic west-east wagon trip along the main paths of the old Oregon Trail.  His trek was a publicity stunt  with the purpose of establishing monuments along the route to educate the public about this notable American historical period.  Later, he merged the Trail adventure with the sale of Oregon Trail Memorial half dollars to support the program.  Meeker’s venture caught the attention of U.S. President Theodore Roosevelt and Henry Ford.

Later, the Oregon Trail Association spawned similar projects: the Mormon Trail (explored by members of the Church of Latter Day Saints); the Hastings Cutoff (mostly in Utah); the Chisholm Trail (later boosted by books and films); the Applegate Trail (an early wagon route through southern Oregon and California); the Ozark Trail (for hikers); the Palouse to Cascades State Park Trail (sometimes called the John Wayne Trail or the Iron Horse Trail in Washington State); the Santa Fe Trail (a 19th century route between Missouri and Santa Fe, New Mexico); and the Bozeman Trail (following Mountain Man and discoverer of Salt Lake Jim Bridger’s route through today’s Utah and Montana).

Over the years, Ezra Meeker’s reputation and the old Oregon Trail merged in a series of celebrations.  In March 1930, two years after Meeker’s death, Dr. Howard R. Driggs, professor of English at New York University and Meeker’s successor in heading the Oregon Trail Association, oversaw the Covered Wagon Centennial.  That celebration was described as follows: “[Commemorating] the heroism of the fathers and mothers who traversed the Oregon Trail and opened the way for the winning of the West.”  Members of the 1930 Association board included, among others, U.S. Secretary of the Interior Ray Lyman Wilbur, Dr. John H. Finley of the New York Times, Cornelius F. Kelley, president of the Anaconda Copper Company; Vincent Astor, Senator Reed Smoot of Utah, and Connecticut businessman (and ancestor) Junius C. Rochester.

The 1930 Covered Wagon Centennial was a success.  State birthdays were celebrated along the route. Pioneer graves were re-built and decorated. A Boy Scout pilgrimage to Independence Rock in Wyoming was staged. Documents, letters and original pioneer stories were offered at picnics and other meetings, and organizations such as the Pioneer Association of the State of Washington were formed or re-vitalized from Missouri to Oregon.  Old-timer Ezra Meeker would have been proud to see what his efforts had wrought. The Italianate mansion he built in 1890 is today turned into a museum in Puyallup (check the website for hours).

At a meeting of the Centennial Dr. Driggs offered this observation: “We must humanize our history and make it live in the hearts of the youth of America, and the opportunity to teach our history most magnificently lies in the simple stories of our pioneers.”

Junius Rochester
Junius Rochester, whose family has shaped the city for many generations, is an award-winning Northwest historian and author of numerous books about Seattle and other places.
Previous article
Casa Italiana: “A Place of our Own”
Next article
Remembering “The Commish”: The Remarkable Deborah Senn