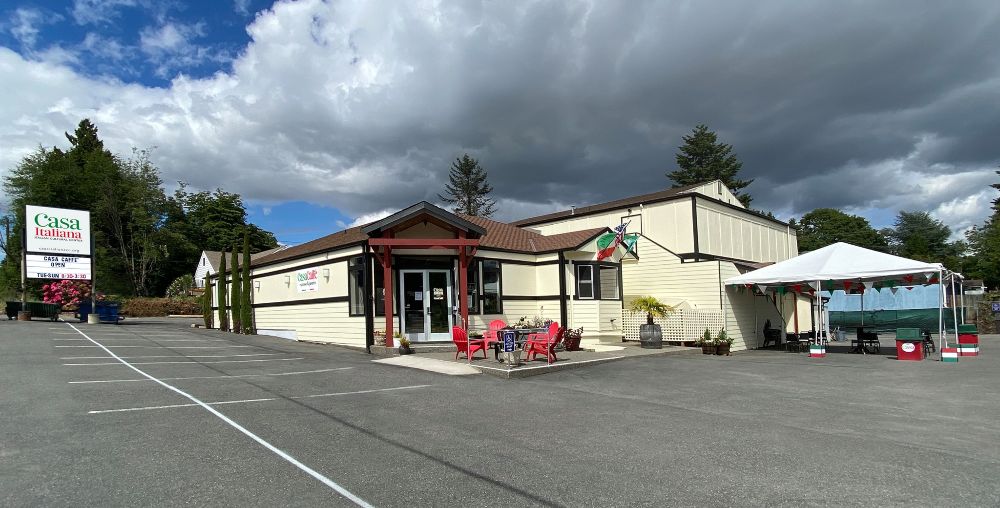 Casa Italiana: “A Place of our Own”

The road to Italy begins at an old Seattle street address — starting line of a community’s search for a home, a Casa, a center, to celebrate friendship, food, and Italian culture. The starting point is 1520 17th Avenue on Capitol Hill, now a fenced parking lot, which was the site of the first Casa Italiana, dedicated in 1930. It failed once — falling behind on mortgage payments — was repurchased and served as a center for the American Red Cross during World War II. Mounting financial pressures forced a final sale in 1968, though much of the money from that sale would be lost years later in the Michael Mastro real estate morass.

In the half century since, local Italian-Americans bickered and failed to agree on a new location. “With us,” says one community leader, “it’s like herding cats into a box.” But as Jerry Mascio of San Gennaro Foods told me, sometimes it takes just one or two people to start a fire — to rekindle that half-century hope for a new Casa. Mascio himself became one of those kindlers, this time with success.

Mascio’s spark came at the annual San Gennaro Festival, a celebration of Italian life in the heart of Georgetown, where many Italian immigrants first settled. He began to think “how nice it would be to have a place of our own where we could get together any time.” A friend, Joe Megale, found a site in the Seattle suburb of Burien, once home to a beauty salon. “I went to look at it,” Mascio remembers, “and immediately realized that this property was a perfect candidate for the new Casa.” To hold the property, Mascio put up the funds out of his own pocket.

Soon, all those “cats,” the often-competing Italian clubs — the Casa board, the Italian Club of Seattle, Il Punto, others — agreed, adding their own dollars to Mascio’s investment.  A coffee shop inside the front door opened, then a library, an office for the Italian consul, a shop with Italian foods, the beginnings of a museum.

Just past the coffee shop, a photo collection tells the story of a long immigrant journey — emigration from Italy, settlement, labor in local coal mines and forests, farming, and early days at Pike Place Market. Upstairs will be the future Casa — a 150-seat auditorium, an elevator system, a commercial kitchen. In short, Jerry Mascio’s vision of “dinners, bingo and movie nights, bocce games outside, classes for Italian language, cooking, and history.”

On dedication day in the spring of 2021, with Covid still hovering, Italy’s Consul General in San Francisco Lorenzo Ortona told the opening crowd that here at last was “a beam of hope that life is starting again.” Honorary Consul for the Northwest, Elisabetta Valentini, a native of Perugia, Seattle’s sister city in Italy, already sees crowds gathering at Casa, seeing its potential. “People whose grandparents or great grandparents emigrated from the mother land, new generations of Italians who just arrived to work at Amazon or Microsoft, students and researchers, children and chefs — my favorite thing is to hear the stories from each and every one.”

The new Italian culture center is a long-awaited dream for Seattle’s Italian-American community and for lovers of Italy at a time when we’ve witnessed the vanishing of Italian enclaves like the Rainier Valley area once known as Garlic Gulch, where Remo Borracchini’s bakery and the Oberto sausage factory store closed in 2021.

Casa board president Martin Nigrelle believes the attraction, the joy of gathering in this space, comes from something many of us share: a sense of being American, but with roots on other shores. “Casa,” he believes, “will be a place to celebrate what has been overshadowed by the stigma of being immigrants, to once again have a place where being proud of being of Italian heritage or simply embracing Italian culture is not only promoted but celebrated.”

That celebration finally came in midsummer, offering the first realization of what Casa could be. It will be like a passeggiata but in one physical space, a joyful gathering of community, what a priest at the original dedication called a place of “family, food, and faith.” Beyond the words on that day, the joy, the smiles, the shouts of wonder, said everything about the potential of Casa Italiana. In Honorary Consul Valentini’s words, “We are many, and we want to be together.”

The challenge now is about the years to come. Fundraising tops the list, with at least $3 million needed to pay off investor debts, finish the remodeling, and fully realize the Casa vision. But for Martin Nigrelle, Jerry Mascio, Joe Megale, and many others, what has been achieved in barely a year is itself astonishing.

Jerry Mascio sums up the century-long dream, now alive in Burien, with hope that “the Italian community will embrace Casa as the central point of gathering and for enjoying their culture. I will always be gratified by having had something to do with its establishment and success.” At Casa now, 92 years after its first incarnation, it’s finally avanti tutta! Full speed ahead.