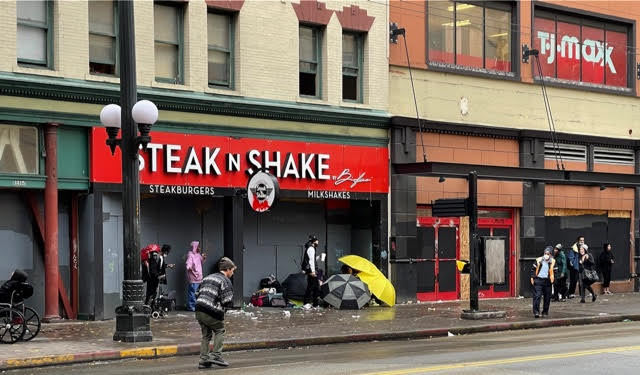 Seattle has become two cities. I walked through both on a recent afternoon. One is emerging again, its streets relatively clean, its stores open again with windows cleaned or plywood gone, its streets full of shoppers on a Saturday. One shopper was wearing a pair of socks reading on the left “Don’t follow me!” and on the right “Because I’m lost too!”

Then there is the other city, just up Union Street from Target. There, against the entrance to The Triple Door, one man was jabbing a syringe into his arm, next to him was his supplier. All around them were trash, discarded needles, and another man hunched over, sleeping against the wall. Up the street, at the corner of Third and Union, recently cluttered by more than a dozen tents, rampant drug use/distribution, and garbage strewn everywhere. All this on Third Ave had been removed just weeks ago. Now it’s all back, just minus the tents.

I don’t know where we go from this point, or whether any candidate elected now or in elections to come can find a path that both restores our streets, allows still boarded-up shops to open again, and gives meaningful help to those in the alleys and storefronts along the street. But there must be hope, an understanding that compassion is a yes and no.  Yes, we can reach out, help, find a better path — as we must — but no to open drug use and sales, littering and blocking sidewalks, denying shuttered stores even the chance of opening again.

It seems a crossroads unfamiliar in all my Seattle years as a reporter. It’s fair to ask of those who want our votes — don’t give us performance, give us a believable vision forward.