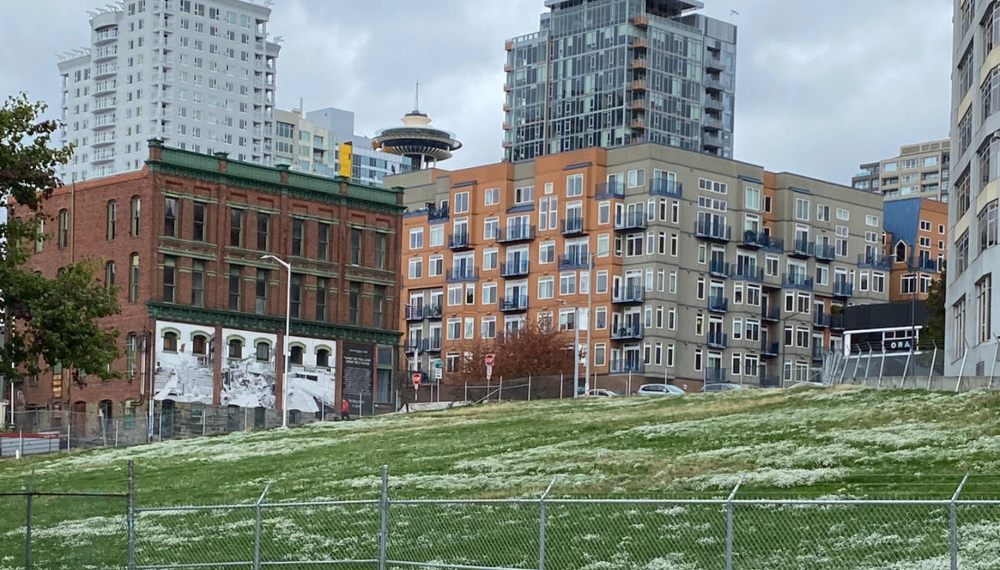 Grownups have been working and living and playing in downtown Seattle for decades. But what about kids? There are no public schools, and for decades, planners and activists have pushed for an elementary school downtown. There’s always a reason it can’t happen, and mayor after mayor has tried to broker a deal with the elusive School District.

One of those hurdles, the absence of land, changed suddenly this month with a Letter of Intent agreement between Mayor Jenny Durkan and interim superintendent Brent Jones of the Seattle School District. The nonbinding letter would put a grade school at the western mouth of the former Battery Street Tunnel in Belltown. The tunnel, displaced by the new toll tunnel for SR-99, is now filled with rubble from the demolished Alaskan Way Viaduct. The west entrance is now full to the brim, smoothed over with soil and planted with grass. The city has offered its windfall plot to the school district if it will just build there.

“The key thing we’ve never had before is a guaranteed site option,” said Seattle city planner Marshall Foster. “It really changes the dynamic.” Foster noted the city and the school district have engaged in a long process of negotiation involving agreement on the need for a downtown school, plus a serious search for land. Anticipating the prospect of new, free land in Belltown, the school district has commissioned design studies that show the feasibility of fitting a school on the site along Western Avenue. In this scenario, the upper part of the site would be available for public open space.

That land is now surrounded by residential and mixed-use buildings both new and old, a typical condition in Belltown. It’s fenced off by high chicken wire, but the grassy slope is the type of open space that attracts many eyes and fires imaginations. It could be a dream come true. Just imagine a row of elementary classrooms full of light, with splashes of sound and color in front of Belltown residents.  Add a grassy slope uphill and to the east for children to play. The greensward would reach all the way to First Avenue, so neighborhood residents could dream of plunking down and watching the western sun settle over Elliott Bay.

There is envy in downtown Seattle and at City Hall for cities that have public schools downtown—such as Boston, where these schools are centuries old, and in family-friendly downtown Vancouver, BC. Western US cities like Seattle have tended to separate homes and commercial areas, getting kids far away from cars and factories and bars and low-rent housing. Suburbanization retrenched the poverty of cities.

In a recent Post Alley story, Jean Godden offered an overview of some big issues in reviving downtown Seattle, noting the need for a count of potential students for a public elementary school downtown. A recent KUOW report also looked at the difficulties (crime, cost, absence of multi-bedroom apartments) in attracting families to live downtown, and sounded some equity warnings of investing in downtown (versus poorer districts) that the present and future School Board will raise.

Marshall Foster has called that count of potential students a “chicken-and-egg thing.” School construction is typically justified by counting the numbers of students served, but in downtown Seattle those numbers are not yet there. The school district may need other criteria to make the project work, such as the number of living units, which are certainly growing.

Families need apartments with more than two bedrooms, ones where they can grow and be comfortable, and those kinds of units are increasing. And there is more public infrastructure, such as playgrounds and parks, according to downtown parent and former city council candidate Michael George. The redeveloping Seattle waterfront park will add even more open space.

A further downtown advantage for schools is good public transportation. Childcare and preschool are available, although George said more is needed. Young families still tend to move away as children approach kindergarten age after checking the ratings of the public schools their children will attend in outlying areas. George acknowledges his own young children will be in school before the school district builds downtown.

As evidence of future demand for a downtown school, George cites a recent call for parent-volunteers with downtown families when nearly 50 signed up instantly. The actual population of pre-kindergarten-age children living downtown is much larger than those 50, he estimates, adding that there is a larger number of families who would like to live downtown but just don’t see how. So the potential student population eludes conventional surveys. If committed parent volunteers stayed downtown, they could be a potent force for the future of public schools in Seattle, too.

There are other downtowners who want a full-sized park at that Belltown opportunity. Belltown real estate broker and activist Tom Graff is one who was frustrated at the School District announcement. Graff has aimed requests for open space in Belltown at decision-makers in City Hall for a decade. He knows the sloping former mouth of the tunnel is a difficult site to build a new school upon, so he was surprised when he learned the new land in Belltown had been offered by Mayor Durkan to the district for a downtown school.

Graff notes it will be hard and expensive to fit a school-plus-park there.  Seattle Center is a much more likely spot for a new school, he thinks, in part because there is an alternative public high school already rooted there in Center House. Why not fit new classrooms and programs for elementary school kids at the Center, on land that’s already owned by the school district, like the large surface parking area at the eastern edge of Seattle Center? One problem: parking has for years supplied reliable income to its owner, the school district.

On the other hand, the new land in Belltown is perfect for open space, according to Graff. It can be easily linked with the Olympic Sculpture Park to the north and west, and on the east side, the land is a block from Bell Street, a green street with plaza-like landscaping intended to offer the amenities of open space to Belltown residents. There’s also an off-leash dog park at Bell Street and Third Avenue.  Without much initial investment, the fenced-off new land could be a jewel in a necklace of public open space as well as a longed-for park in the center of Belltown.

Graff may get his wish if the school district does not act on the letter of intent. There are plenty of hedges in the agreement so far, and numerous near-misses in the past decades.

The district has been studying the site with the help of local design firm Bassetti Architects, and studies have shown that the new land could be the site of a downtown school plus a small public park. This could make the longed-for school a real possibility even with scarce funding, but only if the district continues to work closely with City Hall and local philanthropists.

Close reading of the Letter of Intent signed this month shows a number of hurdles in the way of a school. First on the list is money. A major contingency is a long-planned transformation of the run-down Memorial Stadium, a massive legacy concrete structure belonging to the school district and located inside the east boundary of Seattle Center. In the letter, building a school seems to be contingent upon a $66.5-million capital-levy request to renovate the stadium, which would be part of a ballot measure in early 2022. The stadium, an important venue for sports and graduation events in the public school system, might also (depending on fundraising) be enhanced as an outdoor performance venue.

As usual in this decades-long city/schools negotiation, there are a lot of “ifs,” including the question of what a new Seattle mayor and city council and school board will agree to.  If city and district continue to work diligently together, and if Seattle voters ante up the money to fund a rebuilt Memorial Stadium in 2022, we may have it all—school plus park. That would be a solid win-win. If only.

Clair Enlow
Clair Enlow is a freelance journalist writing about architecture, planning and history. She’s a Loeb Fellow and an honorary member of AIASeattle.
Previous article
Why It’s Time for Higher Ed to get rid of Tenure
Next article
Why You Should Care About This Year’s Port Of Seattle Election