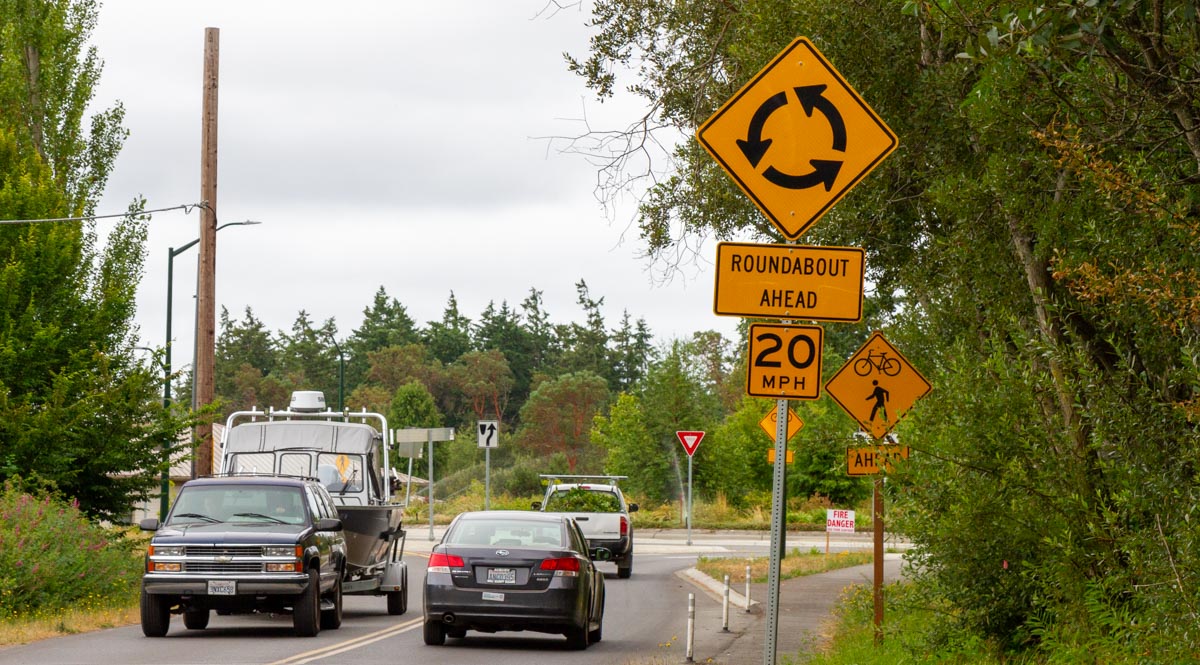 Round and Round We Go

Port Townsend drivers have seen the future. It’s round, runs counterclockwise, and forces them to turn right.  Chances are they won’t like it, but they’ll get used to it.

Port Townsend folks have been negotiating two traffic roundabouts on Sims Way, the main drag otherwise known as SR 20, for close to a decade.  But they ain’t seen nothin yet.  If state transportation planners have their way, and they probably will, drivers headed for Seattle will soon see just one traffic light and one stop sign, and six traffic roundabouts along the way to the Hood Canal Bridge..

These will include two new roundabouts replacing traffic lights in town.  But the biggies are on State Route 104, the highway from Hood Canal across the north side of the Olympic Peninsula.  When that happens, Port Townsend will become a one-light town.

Expect flak. When traffic engineers briefed local officials and taxpayers on the idea last year, drivers howled.  “Stupid idea,” wrote one local critic. “I’ve yet to hear one person who thinks it’s a good idea.”  Another asked: “When did overpriced roundabouts causing months of traffic delays become sexier than a simple stoplight?”

That’s the usual response.  When the state proposed a roundabout at an exit from I-5 in southwest Washington, the Woodland City Council balked, voting 6-1 to stick with stoplights.  “I don’t know what happens when you get a roundabout in this state,” one councilman complained, “but suddenly everybody loses their minds.”

Like so many things American, it’s cultural.  We treasure our God-given right to sit at red lights and breathe our fellow citizens’ exhaust fumes. This has worked well for a century, since traffic lights were invented in the  1920s.

But not so much in this country, where there are about 7,000, mostly in New England and in Washington DC, which was laid out with circles – not to control traffic but to get around monuments to great American heroes.

The resistance has to do with our desire to get places fast.  Cars on urban arterials tend to move at 30 to 40 mph, but roundabouts are designed to slow or “calm” traffic to about 20 in the circles.

And that’s unAmerican. We are creatures of habit.  And many of us, especially in the west, associate roundabouts with (shudder) things European.

Given the resistance, why do engineers keep promoting them – especially on our route to the bridge?

The roundabout at the Port Townsend turn-off from SR 104 will replace a stop sign, hopefully addressing one of the state’s most hazardous stretches of highway. The other one, at the west end of the Hood Canal Bridge,  is designed to slow cars headed for the bridge and to eliminate long waits for Port Ludlow drivers trying to get onto the highway.

In their defense, traffic planners cite costs.  Traffic lights  are expensive.  Just one of those big red/yellow/green light fixtures runs at least $2,000.  The poles they hang from start at $25,000 and go up even faster.  Throw in the wiring and $30,000 controller units and engineering and other stuff, and we’re talking anything from $250,000 to $1 million per intersection.

Roundabouts don’t need wiring, but they do frequently require more real estate.  Cities like Seattle have too many cars and too little space, so they don’t have the option.   But the front-end costs of roundabouts like Port Townsend’s can be as much or even more than a basic signalized intersection.

That, however, is more than offset by maintenance costs.  Stoplights need to be fixed, updated and periodically replaced.  Roundabouts don’t.

And, despite driver grumblings, experts say those circles actually move as much as 50 percent more traffic on the typical arterial.  It’s about flow; while cars slow down for roundabouts, they rarely stop entirely.

The biggest difference is in safety.   Car crashes kill 35,000 Americans and injure 2.75 million every year.  A quarter of those casualties occur in perpendicular “T-bone” crashes in signaled intersections, where drivers run red lights or push yellows.

Accidents occur in roundabouts as well, but they are far more likely to be non-injury fender-benders.  Carmel, Indiana, a suburb of Indianapolis, has replaced most of its signalized intersections with roundabouts – 133 of them at last count.  And their rate of injury accidents has plummeted to a fraction of the national rate.

Drivers will resist anyway.  Roundabouts make us slow down.  We don’t understand them.   To take a left turn, we have to take a right, and then another right.  All thanks to some pointy-headed engineers in Olympia.

The good news: Surveys by the Insurance Institute for Highway Safety indicate the resistance is short-lived.  When roundabouts are installed, most drivers are opposed.   Six weeks later, the resistance is cut in half.  After a year, it’s gone.

The author used information from an excellent Freakonomics podcast. Find it at Should Traffic Lights Be Abolished? (Ep. 454) – Freakonomics Freakonomics

Ross Andersonhttps://rainshadownorthwest.com/
Ross Anderson is a founding member of the Rainshadow Journal collective. He retired to Port Townsend after 30 years of journalism at the Seattle Times.
Previous article
So You Want to Visit Italy (Or Better Yet, Move There). Here’s How
Next article
Protection Island: One Small Fire, Thousands of Seabirds at Risk