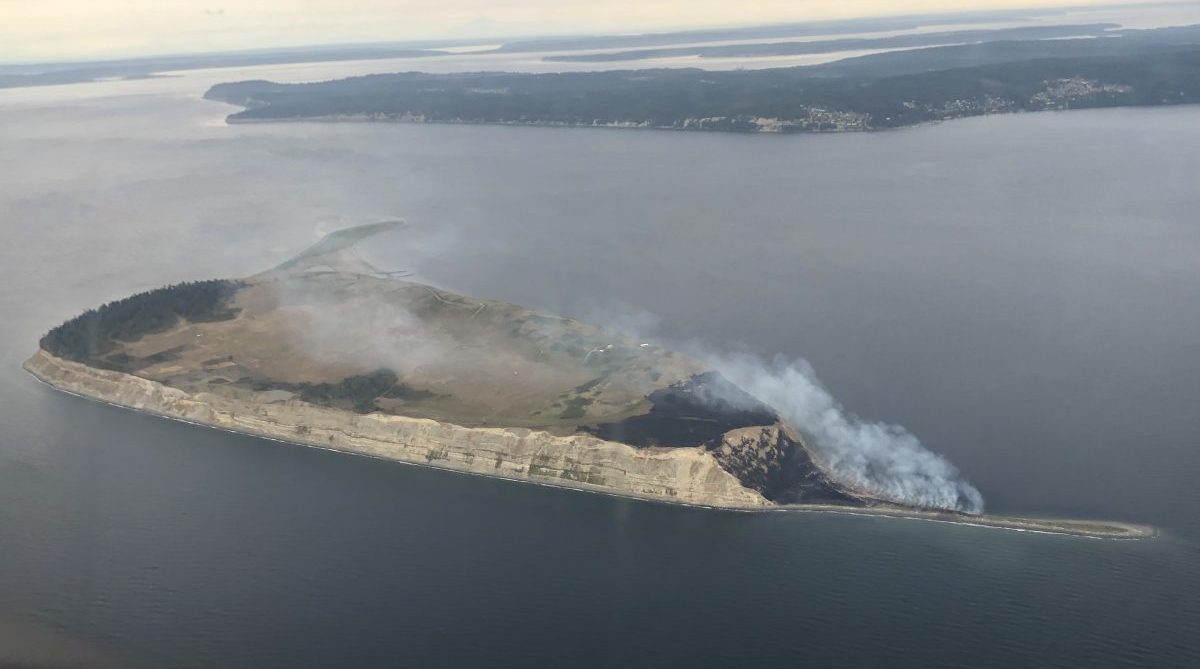 Protection Island: One Small Fire, Thousands of Seabirds at Risk

This summer, as in countless summers past, Protection Island west of Port Townsend became a colossal daycare center for tens of thousands of seabirds.

Glaucous winged gulls laid their camouflaged eggs in rudimentary nests or “scrapes” near the high tideline. They began hatching in July, producing thousands of awkward gray chicks that could barely walk, let alone swim or fly.  Meanwhile, still larger numbers of rhinoceros auklets deposited their eggs three to six feet deep in burrows atop the bluffs at either end of the island.

Pigeon guillemots, mid-sized black seabirds with bright red feet reminiscent of Dorothy’s slippers, nested amid the driftwood above the tideline, or atop the bluffs.  And a few tufted puffins, which have become a Port Townsend icon, nested nearby.

All was going well.  Until the fire.

In a time of rampant western wildfires, Tuesday’s fire on Protection Island hardly warranted an asterisk. Fires from Canada to California and Colorado have killed people, destroyed homes, livelihoods and whole towns. The Protection Island fire burned only a few acres. No human lives were lost and no homes destroyed on the small, aptly-named island, two miles long, at the mouth of Discovery Bay.

Recognized as a crucial nesting place for Salish seabirds, Protection Island was set aside as a wildlife refuge in the 1980s. Biologists have barely begun to assess the damage from last week’s fire, but the toll will eventually be measured in biological terms –- just another step backward in our collective effort to preserve the Puget Sound ecosystem.

The fire’s cause isn’t known. And nobody was on the island (pop. 1). The fire started Tuesday morning on Kanem Spit, the sandy point covered with grasses and driftwood extending a few hundred yards west of the 150-foot high bluffs. Later in the day, the flames reached the top of the western bluff and burned several acres of grasses before federal wildlife personnel stopped it just short of the rustic home of Marty Bluewater, the sole and last island resident profiled recently by the New York Times.

“It was a pretty bad time for this to happen,” says Scott Pearson, a seabird specialist at the state Department of Fish and Wildlife. For instance, harbor seals have been pupping on the island since June, and wildlife surveyors two weeks ago counted more than 600 of them, many of them on the beach at Kanem Point. Biologists report pups can swim as soon as they are born, and so “probably were able to evacuate the area,” one reported. And there was no sign of a problem with the few elephant seals that frequently beach themselves there.

Jim Hayward, the Michigan biologist who has spent 30 summers researching the island gulls, reports that most of the gulls nest at the opposite, eastern end of the island, so may have escaped the flames and smoke.

The status of the puffins is unknown. While Puget Sound is at the far edge of their natural range, the island once was home to hundreds of nesting pairs.  This year, Pearson believes there may only be two nesting pairs left. A July survey counted eight birds in the area.

The fire appears to have stopped short of the puffin nests, Pearson says. But he fears the smoke could have prevented adults from returning to feed newborn chicks.

Rhinoceros auklets, close relatives to the puffins, have thrived on the island –- especially on the bluffs above Kanem Spit, he says. “The adults feed out on the strait during the day and return to their burrows just after dark with bill-loads of fish to feed the chicks.”

Flames might not affect the young, but he worries about smoke.  Biologists planned to inspect burrows on Friday to begin assessing the impacts. “The auklet population is extremely important,” Pearson says. In 2008, his team estimated nearly 35,000 “active burrows” on Protection Island, which suggests up to 70,000 auklets were nesting there. “That puts the island in the top ten auklet nesting areas globally.”

Perhaps the birds most at risk are the pigeon guillemots, which nest in the driftwood. Long after the grass fire was controlled, the logs continued to smolder. Newly-hatched chicks may have been lost to the flames and smoke, Pearson says. The gull and auklet populations have been “generally stable,” he says.  “But guillemots may be in trouble.”

Ross Andersonhttps://rainshadownorthwest.com/
Ross Anderson is a founding member of the Rainshadow Journal collective. He retired to Port Townsend after 30 years of journalism at the Seattle Times.
Previous article
Round and Round We Go
Next article
Logjam: State’s Top Officials Grow Old in Place While New Talent Stacks Up