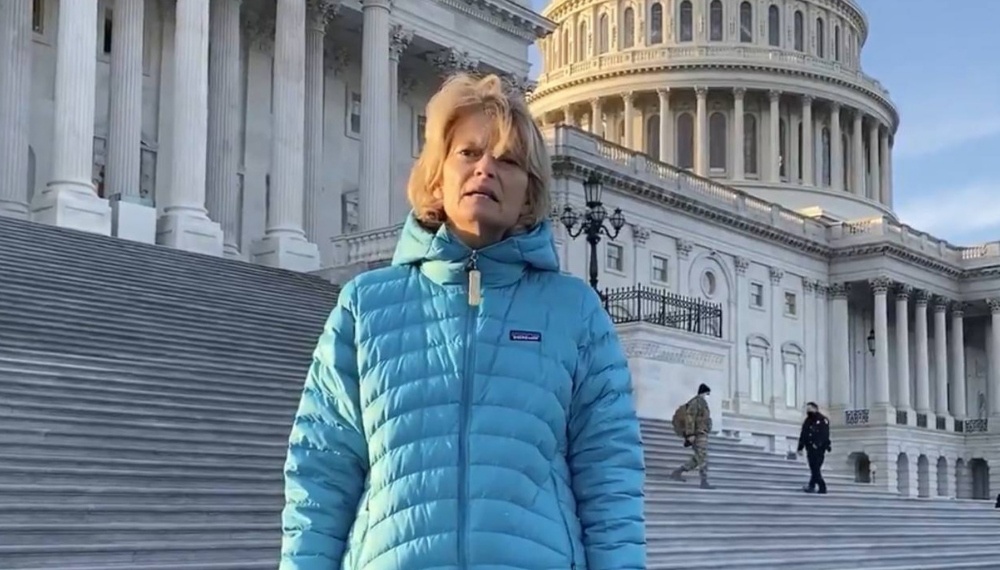 Alaska Sen. Lisa Murkowski: Is this still the Republican Party for me?

She has defied the populist right before – winning reelection as a write-in candidate in 2010 – and Alaska Sen. Lisa Murkowski on Friday became the first Republican in Congress’ upper chamber to call for the ouster of President Trump.

If Trump stays in the Republican Party, the four-term senator told the Anchorage Daily News, she wonders whether she can remain in its ranks. “I want him to resign,” Murkowski said of Trump. “I want him out. He has caused enough damage,” said Murkowski, adding: “If the Republican Party has become nothing more than the party of Trump, I sincerely question whether this is the party for me.” Murkowski is up for reelection in 2022 and defiance of Trump will make for a hot time in a state that’s feeling the impact of global warming more than any other.

Might Murkowski defect to the Democrats, and might the party be able to offer enough inducement to produce the defection? Murkowski has choice Senate committee posts. She has chaired Energy and Natural Resources and is a senior member of Appropriations, vital to Alaska. It’s unlikely Democrats could ever lure her with an offer. Much more likely, Murkowski joins with Sens. Joe Manchin, D-West Virginia, ‎and Susan Collins, R-Maine, in a pivotal centrist block that helps set the agenda of an evenly divided Senate.

The Alaska Senator has deep roots in the Republican Party, as daughter of former GOP Sen. (and Gov.) Frank Murkowski.  She has effectively chaired the Senate Energy and Natural Resources Committee in the GOP-controlled Senate.

Challenging an unpopular president of your own party is painful.  One of Alaska’s original lawmakers on Capitol Hill, Sen. Ernest Gruening, found that out when he was one of two men in Congress (Wayne Morse of Oregon was the other) to defy Lyndon Johnson and vote against the 1964 Gulf of Tonkin Resolution, the green light for war making in Vietnam.

If you’re the opposition, it’s time to tee off. The Northwest’s Democrats have been demanding that Trump vacate 1600 Pennsylvania Ave. – immediately.  Sen. Patty Murray, D-Wash., has suggested his defenders ought to vacate Capitol Hill after Wednesday’s riot outside by Trump supporters, and objections to Joe Biden’s victory inside halls of Congress. “Any senator who stands up and supports the power of force over the power of democracy has broken their oath of office:  Senators (Josh) Hawley and (Ted) Cruz should resign,” said Murray, a member of the Senate’s Democratic leadership.

Not necessarily. Just as Trumpism was embraced by opportunists in the GOP – U.S. Rep. Cathy McMorris Rodgers is prime example – others such as ex-Sen. Slade Gorton, ex-Gov. Dan Evans and 2016 gubernatorial and Senate nominees Bill Bryant and Chris Vance loathed and spurned Trump.

Murkowski was among the first Republicans in Congress to acknowledge Biden’s election as president.  She was early in knocking down Trump’s multiple, often-laughable legal challenges and claims to have won an election he lost by 7 million votes.

It is in character.  As an Alaska politician,  Murkowski is a longtime ally of the petroleum industry.  She engineered the backdoor authorization of oil drilling in the Arctic National Wildlife Refuge, as part of Republicans’ 2017 tax cut bill.  A bid by Sen. Maria Cantwell, D-Wash., to remove the drilling provision lost on a 52-48 vote.

On social issues, however, Murkowski is moderate.  Encouraged by her sons, she became one of the first Republican lawmakers to endorse same-sex marriage.  She was the lone Republican to vote against confirmation of Brett Kavanaugh to the U.S. Supreme Court. She was one of the bipartisan architects of the $900 million pandemic aid package passed by Congress and signed into law by Trump despite the President’s loud, late objections.

She has had to leave, and think about leaving, the Republican reservation. Murkowski lost her 2010 Republican primary to Tea Party (and Sarah Palin-backed) candidate Joe Miller.  She mounted a write-in reelection campaign, despite having a name hard to spell.  A campaign T-shirt bore images of a cow and a ski.  Murkowski won back her seat.  The National Republican Senatorial Committee had supported Miller. Murkowski was the first write-in Senate victor since Strom Thurmond in 1956.

She won one more victory that was very-Alaska.  Murkowski had long championed legislation to change the name of 20,300-foot Mt. McKinley back to its aboriginal name of Denali (“the high one”).  A Democratic president, Barack Obama, did the name change.  (Trump at one point promised to restore the McKinley name.) Recently, the bipartisan team of Murkowski and Cantwell has succeeded in winning congressional authorization of six new polar icebreakers.

She delivered an icy judgment of Trump.  “He needs to get out: He needs to do the good thing, but I don’t think he is capable of doing a good thing,” she told the Daily News. “He’s either been golfing or he’s been inside the Oval Office fuming.”

There comes a time for a good person to raise her flag — off the golf course.

Joel Connelly
I worked for Seattle Post-Intelligencer from 1973 until it ceased print publication in 2009, and SeattlePI.com from 2009 to 6/30/2020. During that time, I wrote about 9 presidential races, 11 Canadian and British Columbia elections‎, four doomed WPPSS nuclear plants, six Washington wilderness battles, creation of two national Monuments (Hanford Reach and San Juan Islands), a 104 million acre Alaska Lands Act, plus the Columbia Gorge National Scenic Area.
Previous article
Turning the Day of Rage into a ‘Teachable Moment’ Faces Obstacles
Next article
Our Fastest-Growing State… Idaho?