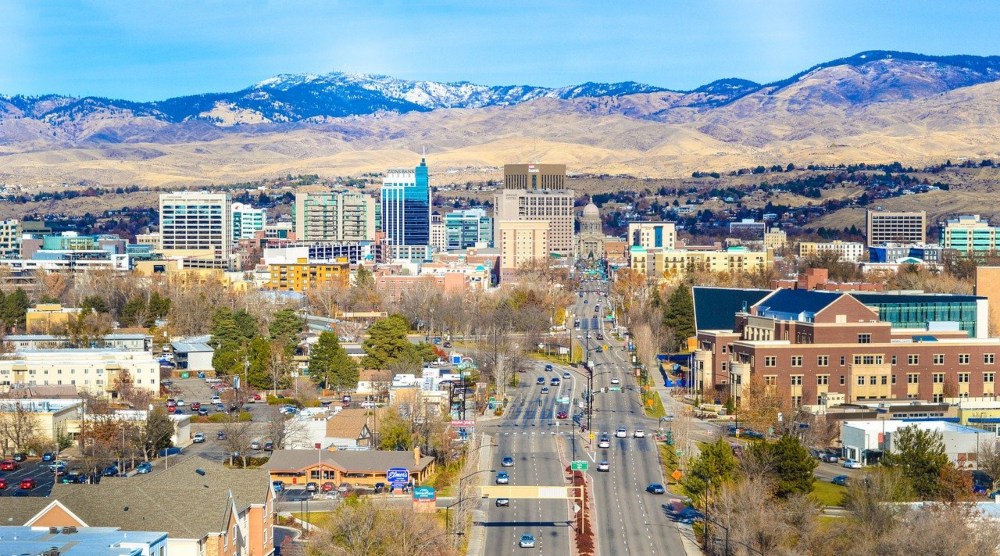 Next time you are in Boise, listen carefully. That stampeding sound you hear is not cattle on the range, but Californians pouring into the Gem State.

No state has grown faster than Idaho in the past five years. The Mountain West, overall, has had strong growth since 2015, with Nevada, Utah and Arizona right behind Idaho in the growth rankings.

Idaho’s nearly 11 percent growth rate over five years was quite a bit ahead of Nevada, the number two state for growth, and about four times the national rate. At just under 2 million people, Idaho is not a particularly large state. It has advanced one place in the rankings, to No. 38, in the past ten years.

Figure 2 shows the growth rates for Idaho’s 43 counties. (Most recent county estimates are for 2019.)

Most of the growth has been concentrated in the Boise metro area, with 95 percent of the metro population residing in Ada and Canyon counties (Canyon is to the left of Ada on the map). Teton County on the far eastern side has grown fast but is quite small. The Panhandle area, including Kootenai County, which abuts Spokane County, has also experienced strong growth.

Figure 3 shows the origins of domestic in-migrants to Idaho between 2017 and 2018 (the most recent data available) based on IRS tax returns. In-migrants into Idaho are shown above the line in the dark bars, out migrants from Idaho to each state are shown below the line in light bars, and the red dots show the net flow.

The picture is very clear: a big one-way pipeline from California to Idaho. Oregon, Washington and Utah have strong two way flows with Idaho, resulting in modest net gains for Idaho. But the flow from Idaho to California is small in comparison to the flow north. California is responsible for 57 percent of the net in-migration to Idaho.

The California effect is even more pronounced in the Boise area. Figure 4 shows the top non-Idaho origin counties for migrants to Ada and Canyon counties between 2017 and 2018.

California counties dominate the flow of migrants to Boise.

Is all this in-migration causing Idaho to become notably wealthier? Figure 5 shows per capita personal income growth for Idaho, as well as the United States, California and Washington over the past 30 years.

Idaho has kept pace, almost exactly, with the country over that period, and has not experienced the stronger income growth of the West Coast states. Average incomes in Idaho remain at about 80 percent of national averages.

In 2020, metro Boise had the largest apartment rent increase of any metro area over 250,000 people, and Boise itself had the third largest rent increase of any city over 100,000 people. Rent for a one-bedroom apartment in Boise in December 2020 was $1,110. This is up 12.1 percent over the past year, indicating that Boise’s big cost advantage might be eroding as it grows rapidly.

Back in June, the Indexer speculated about the possibilities for medium sized cities that might grow as a result of pandemic-induced shifts in population away from large cities. We looked at four cities: Spokane, Boise, Colorado Springs and Provo. If changes in apartment rents are a reasonable proxy for short term population shifts, the speculation may be bearing out. Of the 240 cities over 100,000 people in ApartmentList’s database, Spokane ranked 40th in rent increases (6 percent) and Colorado Springs ranked 55th (5 percent). Of the top 20 cities for rent increases only one, Fresno, has a population of over 500,000. The large West Coast metro areas all saw drops in median rents.

It is far too early to tell whether the short term trend of moving away from the large West Coast metro areas to the mid-sized Mountain West will persist. But it is important to note that Idaho’s rapid growth pre-dates the pandemic.

Idaho and the Mountain states in general have fewer restrictions on homebuilding than typically found on the coasts, so it will be interesting to see how rapidly the housing industry responds to this growth and whether a faster increase in housing supply will keep prices from rising along with rapid growth.

Michael Luis
Michael Luis is a public policy consultant who has been wrestling with housing, growth and economic development issues around Washington State for over 30 years. He is author of several books on local history and served as mayor of Medina.
Previous article
Alaska Sen. Lisa Murkowski: Is this still the Republican Party for me?
Next article
Good News In the “Bad” Jobs Report