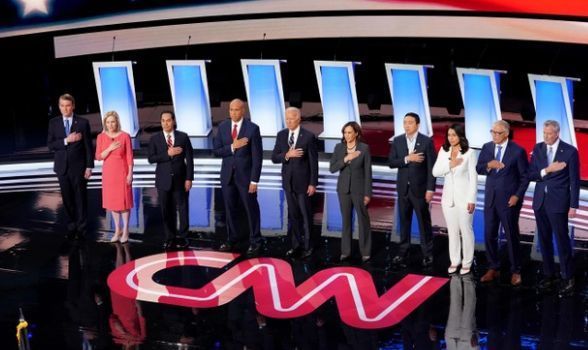 Apparently, for all 20 Democrats jockeying for the U.S. presidency in 2020, the world begins with sunrise on the Eastern Seaboard and ends with dusk on the California Coast.

The total absence of discussion of America’s role in the world during two nights of debate presents a frightening measure of the success of Donald Trump’s “America First” platform. Not even front-runner and former Vice President Joe Biden, with nearly half a century as a player in Washington with serious foreign policy chops, got a word in edgewise in defense of our crumbling trade and security alliances.

No one spoke about the global consequences of Trump’s abdication of American leadership on climate change, nuclear proliferation, protracted wars and terrorism. Nor did they cast themselves as prospective presidents who would reinvigorate U.S. authority in a world succumbing to populism and an America cozying up to dictators and parting with long-standing allies.

Granted, the voters they were addressing in the nearly six hours of debate on questions from CNN interviewers are more concerned about health care, jobs, the economy and race relations. But, at least on global warming, which is accelerating to a point of risking life as we know it within our lifetimes, one would have expected the aspirants to the White House to at least lament America’s lost moral and political clout in the world.

There was a whisper of world consciousness in the discussion of immigration and the heart-rending scenes of U.S. border authorities incarcerating exhausted refugees and separating children from their parents. But the candidates talked of the border crisis as a domestic political problem, not as this country’s failure to live up to Lady Liberty’s promise to take in the huddled masses yearning to be free.

Climate change also dipped a toe beyond North American coastal shores during the few minutes it was the topic of discussion on Tuesday and Wednesday. Washington Gov. Jay Inslee, unlike during his uneven performance in the June debates, touted the urgency of action against use of fossil fuels, countering other debaters’ dismissal of Congressional progressives’ Green New Deal as unrealistic.

“Survival is realistic,” Inslee insisted, calling on his Democratic colleagues to recognize that climate change is not a singular issue, it’s the economy, public health, national security and the future of the planet.

Others on the fringes of the crowded field of Democratic contenders gave what little international perspective came out of the debates.

Andrew Yang, the New York businessman whose proposal for a $1,000-per-citizen “Freedom Dividend” has galvanized an enthusiastic following, vowed to bring the United States back into the Paris climate accord and the multinational Iran nuclear security pact and to pull U.S. troops out of “forever wars.”

In concluding remarks after the Wednesday night exchange, only one of the 10 debaters – the distant prospect Tulsi Gabbard – called on the next president to tackle soaring tensions between the United States and adversarial powers around the world.

“Donald Trump and the warmongering politicians in Washington have failed us,” the U.S. representative from Hawaii said of escalating threats around the world. “They are pushing us closer to the brink of nuclear catastrophe.”

Even the paltry share of debate time spent on international issues on Tuesday night was focused on what’s in it for U.S. industry to take on China in the race to dominate the market for climate-friendly vehicles and power generation. There was scant attention on the issues of Trump withdrawing from treaties and trashing allies in NATO and the European Union, scuttling the Iran nuclear deal and the Paris climate pact and taunting trade partners from China to Mexico.

On Russian meddling in U.S. and European elections, or the Kremlin’s alleged use of nerve agents to poison political adversaries at home and abroad? Nada. On the unraveling of post-Cold War arms control agreements? Silence.

There were a few vague allusions to Trump’s surrender to Russian President Vladimir Putin’s cunning charms but nothing to help voters focus on what is at stake when the U.S. president rejects the unanimous assessment of the intelligence community that Russia is engaging in hostile acts against American democracy.

South Bend, Indiana, Mayor Pete Buttigieg, the only war veteran on the Tuesday night panel, promised to pull U.S. troops out of Afghanistan within his first year in office. He called for putting a three-year limit on congressional authorizations for the use of military force abroad to prevent American troops getting sucked into endless conflict, as in the now 18-year-old Afghanistan war and the U.S. presence in Iraq just a year younger.

Bernie Sanders lamented the $715 billion U.S. military budget and the $5 trillion spent on foreign wars in the past two decades. But his appeal for diplomacy and letting the United Nations take the lead in peaceful resolution of conflicts did little to portray him as a president who would do much to restore U.S. allies’ trust and adversaries’ respect. He did allude to the need for American leadership on the climate crisis “because this is not just an American issue.”

Elizabeth Warren urged everyone on the stage to commit to a no-first-use of nuclear weapons, which spurred pushback from Montana Gov. Steve Bullock who said he “wouldn’t want to take that off the table.” Warren used one of her 30-second commentary slots to make one of the few references to the Iran nuclear deal and its looming collapse from Trump’s unilateral withdrawal from an agreement that Iran had been complying with.

“Iran is now working on nuclear weapons,” the Massachusetts senator warned. “The world is getting closer to nuclear warfare.”

Carol J Williams
Carol J. Williams is a retired foreign correspondent with 30 years' reporting abroad for the Los Angeles Times and Associated Press. She has reported from more than 80 countries, with a focus on USSR/Russia and Eastern Europe.
Previous article
A good/bad night for Warren
Next article
Biden Reasserts His Frontrunner Status