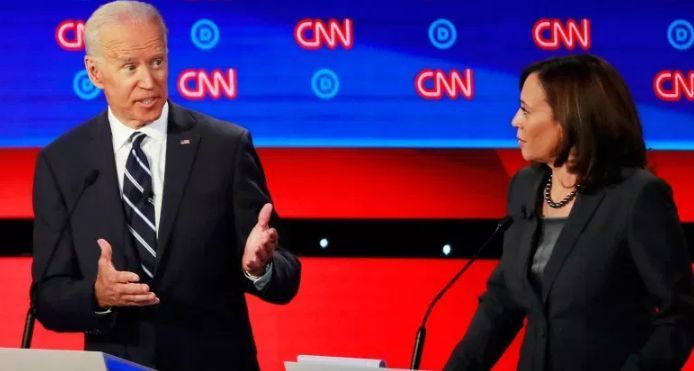 Those who thought (as I did) that Joe Biden showed in the first Democratic debate that he had passed his sell-by date, was weak, would fade fast as front-runner—well all of us were proved wrong by his strong performance in the second.

He had his brief down cold—he beat back Kamala Harris and the obnoxious Warren-wannabe, Bill deBlasio, on health care and defended his plan (expanded Obamacare) well. He countered Julian Castro’s (also Cory Booker’s, Kirstin Gillibrand’s, Harris’s and Tulsi Gabbard’s) immigration arguments for decriminalizing unauthorized border-crossing. And, with some help from Gabbard, poked holes in Harris’s rising balloon by pointing up flaws in her work as California attorney general.

To Castro, Biden struck: “I have the guts to say that his (Castro’s) plan doesn’t make sense. In fact, when people cross the border illegally, it’s illegal to do so unless they’re seeing asylum. People should have to get in line. That’s the problem. And the only reason this particular part of the law is being abused is because of Donald Trump. We should defeat Donald Trump and end this practice.”

Biden also had great lines in his opening statement, pointing to the diversity displayed on the debate stage and addressing Trump: “Mr. President, this is America. And we are stronger and great because of this diversity. Mr. President, not in spite of it. So, Mr. President let’s get something straight: We love it. We are not leaving it. We are here to stay. And we’re certainly not going to leave it to you!”

Granted, Biden ducked explaining his advice as vice president when Obama had 800,000 illlegal immigrants deported from 2009 and 2010. He also ducked saying it was simply mistaken to have sponsored draconian anti-drug and crime laws in the 1970s. But he did recover when braced on those issues by pointing out that Obama tried for six years to reform immigration law and that he himself proposed reductions in sentences for drug crimes.

Bottom line: Biden deserves to have his position as Democratic front-runner bolstered. Also, his position as leader in the moderate progressive lane of candidates. Others in the lane, like Michael Bennet, Amy Klobuchar, John Delaney, John Hickenlooper, Steve Bullock and Tim Ryan, made a lot of substantive sense during debates, but haven’t been able to light any fires.

Last night, Bennet started out wooden, but came alive when the super-left deBlasio accused him of mouthing “Republican talking points” for not wanting to eliminate private health insurance or (evidently) put pharma companies out of business.

Bennet retorted: this has nothing to do with Republican talking points or the pharmaceutical industry. This has to do with having faith in the American people that they can make the right decisions for their families and they can choose a public option (in a revised Obamacare).”

He told deBlasio “Bernie Sanders, who said last night he wrote the damn bill (Medicare for all), and he did, is the guy who said it will cost $32 trillion and we’re going to have to raise those (middle class) taxes to pay for it. He says that. Republicans don’t say it. Don’t try to distract from the truth.”

Bennett also was passionate about the need to reform American education and he identified himself as author of the 2013 comprehensive Senate immigration bill that passed with 68 votes (only to be refused consideration in the Republican House). He deserves consideration as leader of the center lane should Biden falter.

Meantime, the left lane is still owned by Elizabeth Warren. Kamala Harris, proclaimed star of Debate 1, was shown up for concealing the fact that she wants to get rid of private health insurance, for failing to challenge LosAngeles and San Francisco for operating what Biden called “the two most segregated school districts in the country” and for (in Gabbard’s words) putting “over 1,500 people in jail for marijuana violations and then laughed about it when asked if she ever smoked marijuana.”

Gabbard also charged, “she blocked evidence that would have freed an innocent man from death row until the courts forced her to do so. She kept people in prison beyond their sentences to use them as cheap labor for the state of California.” Harris’s rebuttals were lame.

Some commentators have declared Booker the candidate most likely to rise after the second debate, but he was a Johnny One Note on the claim that Democrats’ conducting spirited policy debates were “allowing Donald Trump to divide us.” What are debates for, then?

Booker engaged in a spirited back-and-forth with Biden about Booker’s management as mayor of Newark, N.J.—especially on police abuse and corruption. Biden may have overdone it—and the ACLU has said Booker turned things around. But I can’t ever forgive Booker for taking Mark Zuckerberg’s $100 million to improve Newark schools—and producing zero progress in kids’ academic performance. No Democrat has brought it up, but Republicans surely will.

Washington Gov. Jay Inslee performed creditably, especially on his central theme—coping with climate change and creating “green jobs” in the process. He’s had an impact, persuading CNN to hold a separate debate on that subject alone. And he has liberal achievements as governor to tout —raising the minimum wage, establishing a public health insurance system, and driving down drug costs and trying to reform the state’s worst-in-the-nation mental health system.

It’s hard to tell, though, whether he can ever break through to be a first-tier candidate. He’d likely be challenging Warren in the left lane—and so far, she’s going to emerge as leader there, shoving aside the angry old man, Bernie Sanders, and the phonies from California (Harris), New York (Gillibrand and deBlasio)  and New Jersey (Booker.)

Mort Kondracke
Morton Kondracke is a retired Washington, DC, journalist (Chicago Sun-Times, The New Republic, McLaughlin Group, FoxNews Special Report, Roll Call, Newsweek, Wall Street Journal) now living on Bainbridge Island. He continues to write regularly for (besides PostAlley) RealClearpolitics.com, mainly to advance the cause of political reform.
Previous article
This Debate Stopped At The Border: Nothing To Say About Our Place In The World?
Next article
Get a Grip! It’s Crucial To Get First Things First