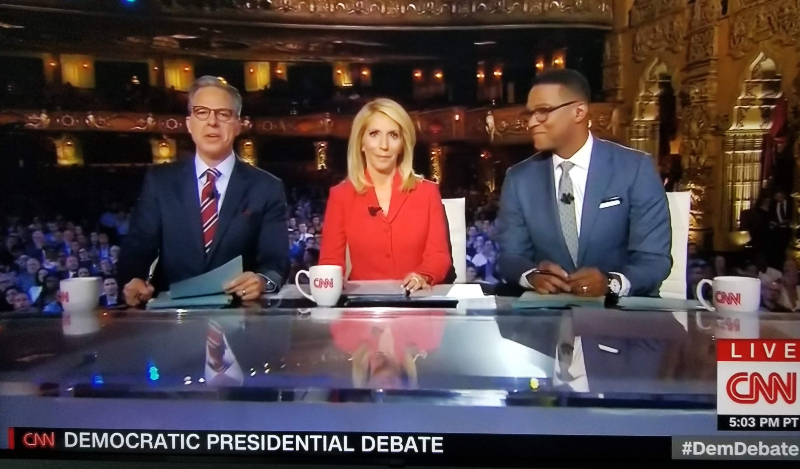 A good/bad night for Warren

I think it’s a bad idea to let these presidential primary debates be run by CNN, which turned everything into a simplistic, made-for-television narrative — left versus moderate — that drowned out other voices and other ideas. It also kept driving the left candidates (Sen. Elizabeth Warren and Sen. Bernie Sanders) into the trap of defending their extreme positions without nuance. Here’s a good critique of CNN and the debate format it created.

Warren fell into this trap and was rewarded by pundits for her feisty defense of dangerously unpopular positions ripe for Republican counter-attacks. She showed little signs of moderating her positions to draw in more support, but instead kept defining her stance as one of “spine,” while critics were slapped away as lacking “fight.”

This brought out the scolding, dogmatic, smartest-person-in-the-room aspect of Warren, which are not traits that will wear well. Not to mention the inconvenient truths Warren will eventually have to stop dodging. Nor do I think this is the time for a dramatic expansion of federal programs (who trusts the national government or Congressional meat-grinders to do this well?), big tax increases, and leaps into the unknown.

The CNN lineup for Night 1 was also unfortunate, placing the bit-player moderates in opposition to Warren and Sanders, while the real showdown (Biden versus Warren) was deflected to a virtual contest. Joe Biden is a shaky figure to be the last moderate standing, a bit like the forlorn role of Ted Cruz as the remaining Republican against Trump.

Meanwhile, I was impressed by Montana Gov. Steve Bullock, fresh to the debate and a long shot. He alone seemed to have the common touch and an effective way of talking sense to normal voters, a bit like an Abe Lincoln or Harry Truman rising up from the remote backwoods. He seemed far from the hothouse politics of Burlington, Vt. or the Harvard Faculty Club.

It is likely too late for any of these non-left figures to find much traction, though I could see Pete Buttigieg moving into the zone of mixing center and left programs, or the vaguely positioned Kamala Harris morphing into a broker. Warren, like Sanders, spent the evening putting herself on a distant island and pulling up the piers.

David Brewster
David Brewster, a founding member of Post Alley, has a long career in publishing, having founded Seattle Weekly, Sasquatch Books, and Crosscut.com. His civic ventures have been Town Hall Seattle and FolioSeattle.
Previous article
Progressives Might Be Right, But Job #1 Is Beating Trump
Next article
This Debate Stopped At The Border: Nothing To Say About Our Place In The World?