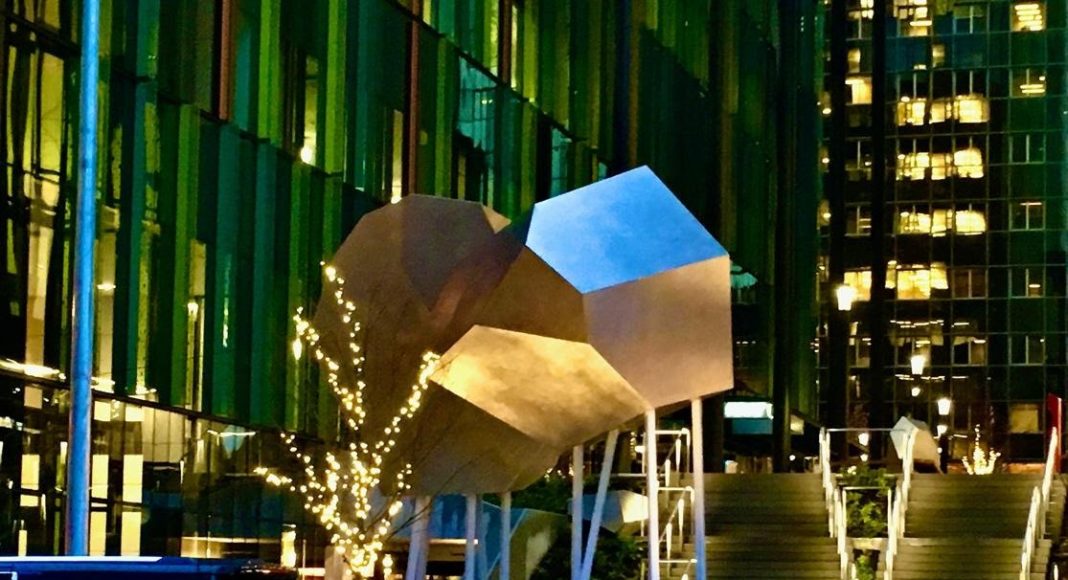 There’s wonder in every crossing of our Puget Sound waters – framed east and west by snow-capped mountains, with islands, forests and towns scattered along its vast reach.

But one day, one hour just weeks ago now, looking south, I began to see that journey in another, nearly timeless frame – no longer just stretching out to Vashon Island and beyond, but as it was in the last ice age.

The ferry carrying us that day, had it existed those 15,000 years ago, would have been frozen in ice more than a half-mile thick.  The retreat of that Vashon Glacier, a melting of astonishing power, sculpted Puget Sound, the islands we sail towards, and all the waters from Olympia to the Strait of Juan de Fuca. The crossing for me is no longer just scenic, but a journey in geologic time. Out the window now I see more than water; I see its history.

And the spark for that moment of deep time came not from some geologic tome, but from art – from the innovative and (in her own words) “permission-giving” sculptures of Vashon Island’s Julie Speidel.  Permission, that is, to imagine a time and history beyond the shapes of her glacial-inspired works.

Those shapes, Speidel’s multi-faceted takes on the erratica, the boulders and stones dragged for miles by the receding glacier, come directly from her childhood, her own history.  Five generations of her family – the writer/historian Bill Speidel was her father – are linked to Puget Sound, to the islands, to Vashon where she lives and works. She watched the tides, felt the winds, crossed these American waters of the vast Salish Sea, remembered vividly lessons from Robert Dietz, her geologist stepfather.  “[He] was an amazing teacher no matter where we were,” the sculptor recalls. “Through him I became aware of land, the drifting continents and erratic rocks that are left when glaciers recede.”

The awareness had been there, somewhere inside, for years, until one day the idea came that she could take those shapes and with technology turn them into art.

In her Vashon studio, Julie worked with clay to test the possibilities – to re-imagine those glacial rocks, then to find their expression in steel and bronze.  She writes in her own introduction to the first of these works, exhibited at the Bloedel Reserve on Bainbridge Island, “Many hours were spent in the studio distilling their powerful complex geometry and creating stainless steel and bronze works that seek to embody their strength and mystery….extending the experience of looking by creating a visual bridge, making connections between aspects of the larger natural environment.”

She adds too that erratic is also another term for wander, a concept which, for the artist, offers almost endless facets and shapes to imagine and create – to marvel at the way light plays off the forms.

For me, the most powerful expression of this connecting power – to the history of our own northwest, to the geology that shaped our landscape – comes in Speidel’s 2014 commission for Amazon’s downtown Seattle campus.  “Petros,” she calls it, Greek for rocks and stones, but in this exhibit reaching beyond mere shapes to an astonishing history.

She wanted scale in that setting of corporate towers, but also a trail of time, a topography of re-imagined erratica between mountains to the east, and our Puget Sound waters to the west.

I cannot see these works now, nor look south from a ferry crossing, without recalling the landscape-shaping power of a melting glacier – in the Vashon case a massive river of receding ice that gave us the islands and waters of the Sound.  I see Julie’s striking works less as objects than as marvelous catalysts calling attention to larger surroundings, to the colossal reach of time.

They stand as reminders too, that our human time in this universe is a hardly measurable blip.  We float, Carl Sagan wrote, in an immense cosmos, “like a mote of dust in the morning sky.”

That is the wonder of human art, and in all Julie Speidel’s work – a connection to that infinite beyond.

Julie Speidel grew up in Seattle and Bellevue but spent her late childhood in Great Britain, giving her exposure to Stonehenge and other ancient monuments. That time, along with many later global travels, still influences her work, much of it striking evocations of those monoliths. “I remember the shadows on the stones, being in awe of them, walking around them.”

From her website, itself a tour of many works: “Julie Speidel’s sculptures engage an extraordinary array of cultural influences, reaching back through antiquity to the stone- and bronze-age peoples of Europe, the early Buddhists of China, the indigenous tribes of her native Pacific Northwest, and on into twentieth-century modernism. Depending on our own spheres of knowledge, we may find in her work echoes of the British Isles’ megalithic stone structures, Cycladic Greek fertility figures, Native American totem poles, and dozens of other iconic cultural forms, some universally recognized, others buried by history. At the same time, her work is strongly linked to that of modernists like Henry Moore and Picasso, who were likewise enormously influenced by the language of antiquity and sought to reinterpret it through a contemporary lens.”