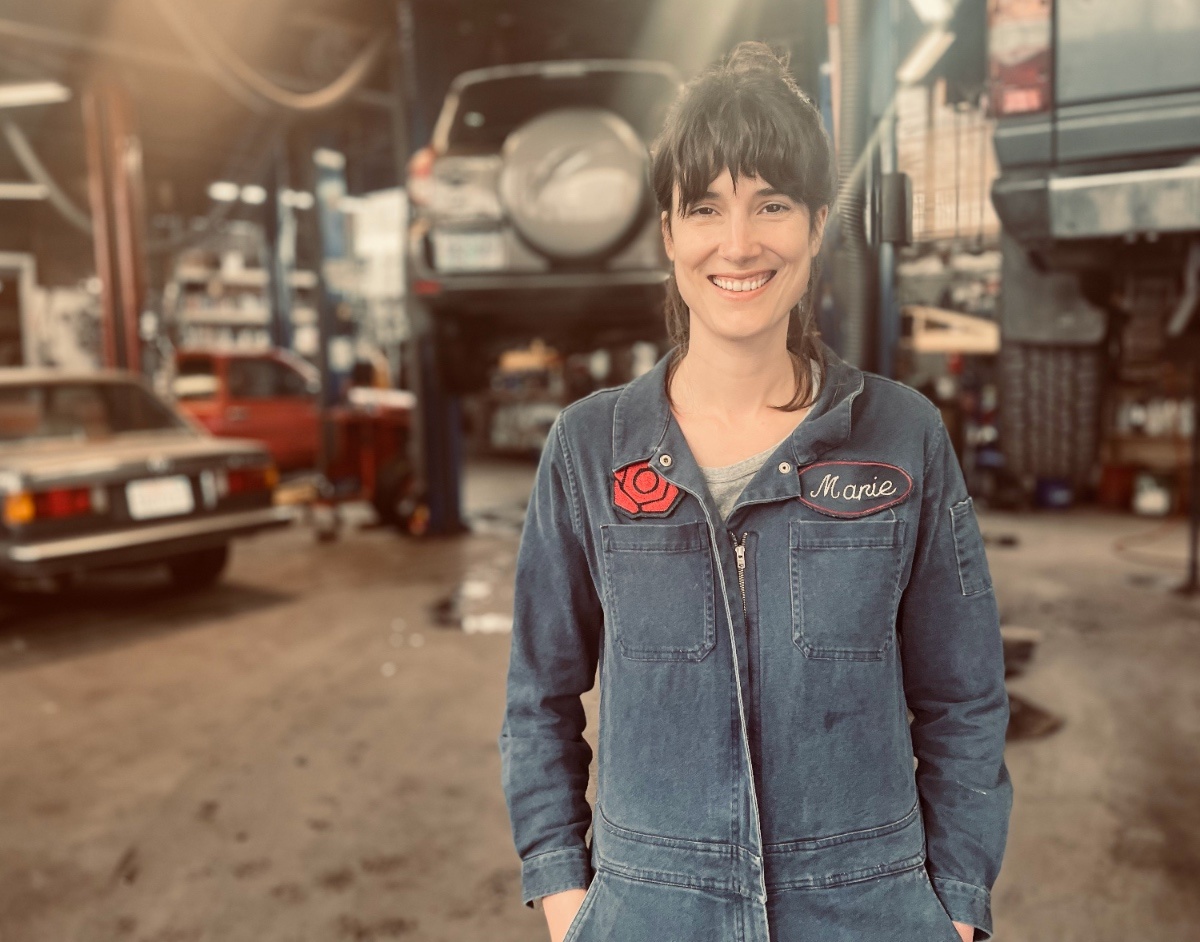 After Herrera Beutler: Can a Centrist Democrat win over Southwest Washington?

If we had an algorithm to identify a candidate who could run and win as a centrist, it might swipe not quite right and not quite left to Marie Gluesenkamp Perez.

Her race for the congressional seat now held by Republican Jaime Herrera Beutler pits her against Joe Kent, the Trumpist who edged Herrera Beutler in the August primary. The race for Washington’s Third District has attracted national attention – first to see if the extreme faction of the Republican Party would punish Herrera Beutler for demonstrating a sense of conscience and morality by voting to impeach Trump, and now to see if a Democrat can win in a Republican district by appealing to the center.

This assumes, of course, that there still is a center to be found anywhere in the United States. Perez is convinced there is. She readily acknowledges that she goes against the standard grain with both Republicans and Democrats. She supports the Second Amendment, is a gun owner, and opposes a ban on assault weapons. She also is an ardent defender of access to legal abortion, supports voting by mail, and talks up climate change as a reality that requires more use of renewables and other urgent enviromental action.

“People love righteous anger. They love screaming at people,” says Perez, who owns an auto repair shop with her husband. “It is a lot harder to get people to think critically about their own beliefs and have these conversations in the middle. It’s important to ask people these questions, and it’s a hard thing. I am disappointing people on the left and on the right. It’s definitely more work to hold nuanced conversations.”

To attempt to hold those conversations, Perez spends much of her time winding the roads of the expansive Third District to knock on doors. She introduces herself as a small business owner, a mom, and a rural neighbor who shares the same challenges they do.

“If you show up and are curious, people will talk to you,” she says. “People are so generous inviting me into their homes. I genuinely like people and want to know them and that’s apparent when I sit down with them.”

Perez ran unsuccessfully in 2016 for the Skamania County Commission, but says it  gave her a chance to learn more about her community and about what’s involved in running a campaign. She had been eyeing the Third District congressional seat for a while because she felt that small businesses like theirs were not understood – that Congress seemed overloaded with doctors and lawyers “and not people running real small businesses and working trades like mine.”

Perez, 34, and her husband, Dean, 41, have a 13-month-old son, Ciro, and own an independent auto repair and machine shop across the river in NE Portland. The shop has six bays and employs eight people, a point Perez emphasizes when talking about small business.

The Third District, covering the counties of Lewis, Pacific, Wahkiakum, Cowlitz, Clark, Skamania, and Klickitat, and a snippet of southern Thurston county, had 770,528 residents in the 2020 census. Sixth-term incumbent Herrera Beutler drew a crowded field of contenders in Washington’s August 2 nonpartisan primary. Early returns showed Herrera Beutler ahead of Kent and three other Republicans but the final count gave Kent the edge over the incumbent. Perez, with 31 percent of the total vote, topped all candidates, including one other Democrat, an Independent and an American Solidarity Party candidate.

Perez graduated from Reed College with a degree in economics and was formerly the executive director of the Stevenson downtown association. She is one of Washington’s four elected representatives to the DNC and is on the Underwood Soil and Water Conservation District Board of Supervisors.

Running for elected office these days is not for the faint of heart with the vitriol and nastiness that has come to characterize the political sphere. Perez seems to take it all in stride, although she does get tired of people suggesting she needs a makeover. She expects that as election day nears the race “will get uglier.”

“A lot of the hate and rage comes from people feeling disrespected, and I’ve been careful in saying I have an inherent respect for people who work for a living,” she says. She adds that telling people she fixes cars for a living, gets her water from a well and works in trades “takes a lot of the fire out” of some voter encounters.

She also disarms people with her family background. Her great great grandfather, Bert Gilmore, a quarry foreman, helped build the Capitol in Olympia. Her grandmother was born in a logging camp. Her father immigrated from Mexico and met her mother at Western Washington University.

“I come from a family that believes in serving the community,” says Perez, noting that her father was a lay pastor. “I felt the sense that normal people have to get involved in politics for real change to take place.”

She says that in high school she attended both young Republican and young Democrat clubs but when one of her brothers came out as gay, “that shut the door on being a Republican for me.”

Much of her platform is informed by her experience including the issues she and her husband face as small business owners, parents and rural residents. She supports a child tax credit, noting that she and her husband take their baby to work with them because they can’t find affordable child care. They also can’t afford health insurance. She supports legislation to boost American manufacturing, wants to expand access to career and technical training at high schools, community colleges and vocational schools and calls for more use of paper and renewables.

While she is a gun owner and opposes a ban on assault weapons, she has left the door open to other gun control measures. In one interview, she explained: “There are widely accepted policy proposals like increasing the age you can purchase an assault weapon, enforcing universal background checks on gun purchases, and closing loopholes that allow people to purchase guns without restriction.”

The issue promoted at the top of her platform page calls for getting big money out of politics and announces that she is not accepting any corporate PAC money. For the July reporting deadline, the FEC shows that “Marie for Congress” reported $241,424.45 in contributions for the primary. For the same reporting period, Herrera Beutler raised $3,500,238.75, and Kent reported $2,251,190.70. Heidi St. John, another far right Republican who hoped to topple Herrera Beutler, also had taken in over a million dollars – thanks in part to GOP operatives strategizing that she would weaken Kent and allow Herrera Beutler to prevail, the conventional thinking being that Herrra Beutler was a surer bet to keep the seat Republican (as Post Alley writer Paul Queary reported.)

While Perez won the primary on a shoestring budget, her cash flow picked up last month after she demonstrated her strength at the polls and when Trump-endorsed Kent emerged as her opponent on the November 8 ballot fueling Democrats’ hopes of flipping the seat. Perez raised more than $600,000 in August, tripling her earlier fundraising efforts. Her own recent campaign poll showed Perez inching into the lead. However, the 3rd Congressional District is still listed as “leans” Republican or “likely” Republican by political forecasters like the Cook Report and Politico.

Reproductive freedom “has been a huge catalyst, a watershed in our campaign,” she says, adding that the Supreme Court decision “lifted some of the apathy” among people who had believed their rights were protected. Often the Republicans she meets are now taking a more nuanced stance, she says, telling her they would never have an abortion personally but do not think it’s the government’s job to decide for women. She says this is especially true among some older Republicans who remember the days before Roe v. Wade and how women were maimed or died having illegal abortions.

Her statement on her webpage about reproductive rights proclaims her full support and lets voters know how Planned Parenthood once helped her.

“Women have the right to control their own bodies, period. I’ll fight to protect a woman’s right to make her own health care decisions no matter what the Supreme Court rules. I’ll stand up to the politicians who want to tell women what to do and protect funding for Planned Parenthood.

“In February of 2020 I miscarried at 16 weeks, and was told my life was at risk without an immediate abortion, or dialation and evacuation. Planned Parenthood was the only clinic that could see me, and I had to pass through a wall of protestors to get the care that I needed.”

To relax and reenergize when not at the auto shop or campaigning, Perez enjoys going out in the woods around their home with her baby boy, playing in the dirt together, and watching him explore everything. “Spending time with my family gives me peace and comfort.”

She laughs that chilling out watching Netflix isn’t an option because her home gets the internet from a radio tower “and sometimes doesn’t get it at all. “I’m pretty sure I would be the only member of Congress that does not have broadband internet at home.” That’s another problem she would like to fix for rural communities like hers.

Perez avoids the mudslinging and flame throwing that abound in today’s politics, but her embrace of rural life includes competing in ax throwing at local fairs. She uses a double bit cruiser ax that belonged to her great uncle and weighs two pounds. Wielding it, she has won several competitions.

Perez pushes her appeal to the center by asking supporters who put up her lawn signs to also display an American flag. She has found the request resonates with voters, explaining: “It’s not about partisanship. It’s about coming together as a country. The partisan purity test is a mistake, anathema to a democracy. At the end of the day, we’ve got to be building bridges and not burning them down.”

Those competitions may be challenging, but not as combative as her Third District race. She holds herself out as a positive contrast to some of the extreme positions of Kent, like his opposition to mail voting (a proven success in Washington State) or his embracing of the “big lie” about the 2020 election.

Still, can Perez truly find a political center in a time where midterm results keep showing so many Republican voters skewing more to the extremes and embracing election lies?

“It’s got to happen,” she insists. “The direction we’re going is horrifying. We need an antidote to the venom we’re hearing out there.”

Linda Kramer Jenning
Linda Kramer Jenning is an independent journalist who moved to Bainbridge Island after several decades reporting from Washington, D.C. She taught journalism at Georgetown University and is former Washington editor of Glamour.
Previous article
Wild Mushroom Season: How to Cook Chanterelles
Next article
A Prosecutor’s Book: How Trump Weaponized “Justice”