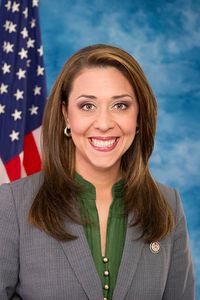 Trump-backed insurgent MAGA Republican Joe Kent has overtaken six-term 3rd District U.S. Rep. Jaime Herrera Beutler in late primary ballots, likely denying JHB a place on the November ballot. She is one of 10 GOP House members who have found themselves in Trump’s crosshairs after voting to impeach the 45th President after the January 6, 2021 insurrection.

If current trends hold, Kent will face Democrat Marie Gluesenkamp Perez in November.  The Democrat leads with 31 percent of the vote, followed by Kemp at 22.8 percent and Herrera Beutler at 22.4 percent, a shockingly low vote total for a House member who easily put away a strong Democratic challenger in 2020. “This race is a complete question mark and there are no sure things,” tweeted Stephen Paolini, associate regional director of the Anti-Defamation League in the Northwest, whose job includes tracking extreme groups.

Kent has emerged as a right-wing media darling.  He appeared Monday on a podcast with Steve Bannon, Trump’s former chief strategist, was a guest of conservative radio host Lars Larson, and appeared later on Fox’s Tucker Carlson Show.  He fanned the far right’s persecution complex when commenting on the FBI raid at Trump’s Mar a Lago estate in Florida, saying: “They’re going after him but it’s a total full-frontal assault.  They’re going after every single one of us.”

In addition to Trump, Kent’s list of endorsers is a who’s who from the right.  The former Green Beret is backed by former National Security Adviser Gen. Michael Flynn and U.S. Reps. Matt Gaetz, R-Florida, and Paul Gosar, R-Arizona. Kent speaks with the zealotry of a Trump convert.  “Defending Trump’s policies have given me a taste of the savage fight we face against a hostile mainstream media and deeply entrenched political class,” he wrote in a self-profile.

Democrats went on the offensive Monday within minutes of when Clark County ballots put Kent in the lead.  Gluesenkamp Perez, who owns an auto repair shop in Stevenson, called him a “white nationalist and extremist,” adding: “Do we want to double down on the hyper-partisan extremism, the falsehoods and the conspiracy theories, the attacks on our own democracy and elections?” Kent is a 2020 election-denier, and used his appearance with Bannon to cast doubt on Washington’s primary, saying his ballot was initially disallowed.  (It was accepted.) “Well, there goes my days off in August,” Tweeted Democratic State Chair Tina Podlodowski, whose tactic has been to label all Republicans as creatures of the extreme right.

The August 2 Washington primary could have delivered one result for the history books.  Rep. Dan Newhouse, R-Wash., may end up as the only Republican voting Yes on impeachment to survive the 2020 election.  Newhouse bested 2020 Republican gubernatorial nominee Loren Culp in his heavily Republican Central Washington district. Culp has indicated he won’t endorse Newhouse.  Newhouse, who has taken a party line since his impeachment vote, tweeted ”I want to thank all of you for your tremendous trust and support.”  He will face an attractive Democratic candidate, Doug White, in the November election.

The 8th District, which straddles the Cascades, has produced something of a surprise.  With a heavy anti-crime theme, 2020 GOP Attorney General nominee Matt Larkin bested King County Councilman Reagan Dunn to win a spot on the November ballot.  Dunn had talked about winning back “my mother’s seat” in Congress, but faced a much more right-thinking electorate than his mother, the late Rep. Jennifer Dunn.

Endangered incumbent Democratic Rep. Dr. Kim Schrier came out of the primary looking good, with almost 48 percent of the total vote.  Schrier has run a skilled campaign, with ads stressing her 100-plus town meetings, support from local mayors both Republican and Democrat, and pro-choice position on abortion rights. She is a former Issaquah pediatrician.

Questions for the general election:  With a far-right Republican nominee, will the Democrats put money behind the late starting Gluesenkamp Perez, who has made a positive impression in the 3rd District?  Will Republicans open their wallets for Larkin, or go after low hanging fruit elsewhere? One thing undeniable:  Herrera Beutler exposed some of Trump’s backstage activities on January 6. She related to journalists a phone conversation in which Trump defended the U.S. Capitol invaders and took a nasty jab at House Minority Leader Kevin McCarthy: “Well Kevin, I guess these people are more upset about the election than you are.” Trump is about vengeance.  He set out to oust the gutsy incumbent from Southwest Washington, and it looks like he succeeded.

Joel Connelly
I worked for Seattle Post-Intelligencer from 1973 until it ceased print publication in 2009, and SeattlePI.com from 2009 to 6/30/2020. During that time, I wrote about 9 presidential races, 11 Canadian and British Columbia elections‎, four doomed WPPSS nuclear plants, six Washington wilderness battles, creation of two national Monuments (Hanford Reach and San Juan Islands), a 104 million acre Alaska Lands Act, plus the Columbia Gorge National Scenic Area.
Previous article
Remembering Tom Alberg, the Man Who Made Modern Seattle
Next article
Rising Violence and Racism Against Migrants in Italy