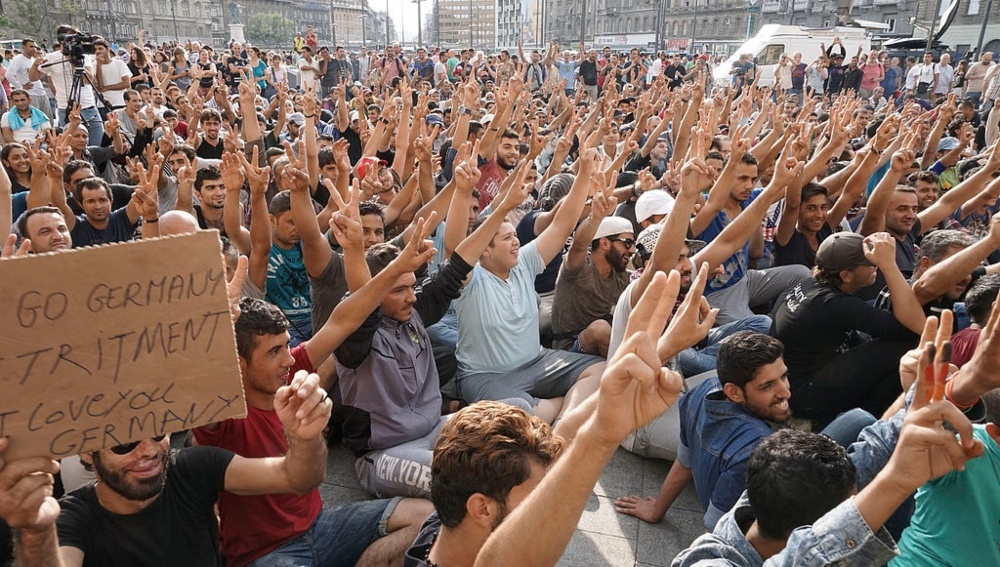 Rising Violence and Racism Against Migrants in Italy

In spring 2015, we found ourselves in the middle of an international flare-up — a migration crisis in which more than a million refugees and migrants crossed into Europe, primarily fleeing conflicts in Syria and other countries of the Middle East and Africa. At the time, few people were aware of it, but 24 hours later it was international news.

My wife and I were on a train from Verona, Italy to Munich, where we were to pick up a flight back to Seattle after a holiday trip. While passing through the Italian Alps, the train stopped at the border with Austria. It was in a densely forested area, so we figured something on the tracks or a change of crew caused the stop. Together with two other passengers in the compartment, we were enjoying the stillness and the view of mountains, with ancient castles hugging the steep slopes.

Suddenly, out of the trees on both sides of the train came hundreds of people, some well-dressed, some in tattered clothes. They were carrying knapsacks, plastic bags, and babies. They piled onto the train, taking every empty seat and lining the aisles. A woman with two children clamored into our compartment, plopping down on the two remaining seats.

She and her teenage daughter were dressed in traditional Muslim attire; her young boy was in a T-shirt and shorts. The woman asked if we were Christians, but we weren’t sure which answer she wanted to hear. The little family looked hungry, so my wife gave them some items she bought from the snack car.

The woman explained that three months earlier she grabbed her children and fled her home in Eritrea minutes before gangs of militia murdered her neighbors. That she managed to travel across northern Africa, cross the Mediterranean, and make it up the length of Italy with no passport, no money, and just a plastic bag of clothes and a partially functioning cell phone was nothing short of astonishing. The human will to survive is boundless.

I was reminded of this personal experience while reading about the tragic and senseless beating of Alika Ogorchukwu, a Nigerian father and street vendor, on the streets of Civitanova Marche, an Adriatic Coast town not far from where we live in east-central Italy. In 2016, another Nigerian man was beaten to death in the town of Fermo, also not far from us. These were crazed acts of rage, directed at innocents who wanted nothing but to find a safe place in a world.

All countries and cultures possess a capacity for racism, and Italy is no exception. When the communist regime fell in Albania in the early 1990s, a sudden surge of migrants fled to Italy to escape deplorable conditions in that country. A few years before that, Romanian refugees scattered across Europe after the downfall Nicolae Ceausescu’s authoritarian rule. Within a few decades, there were a million and half people In Italy from those two countries alone, many with little means of support. Not long after that, when we moved to the village of Santa Vittoria in Matenano, locals warned us about Romanians and Albanians who would readily rob us blind, or worse. That era left a lingering distrust of immigrants in Italy, at least from certain countries.

In the last few decades, Italy has seen major immigration from Africa, the Middle East, Asia, as well as Eastern Europe. Exactly why Italy is seen as a haven is a bit of a mystery since the country’s economy has been sluggish for years. Unemployment is high even among Italian citizens, let alone among immigrants. For people under 30, the unemployment rate is around 35%.

But prosperity and opportunity are relative. Along their trek up the peninsula to Germany, which received the lion’s share of refugees this time, some families and individuals found safe havens in Italian towns. Or so they thought.

Italians have collective cultural memories that go back many centuries. Our own village was founded during the turn of the first millennium by monks who fled from repeated invasions by Saracens from North Africa. The invaders burned towns, gutted monasteries, and murdered many Christians. Some recent migrants have been taken in by criminal organizations that put them to work selling trinkets on beaches and along streets and sometime entangle them in illegal activities. The Italian government has had to boost enforcement of housing standards because many migrant families were packed into cheap, poorly maintained flats. Immigration policies and quotas have dramatically reduced the in-flow, globally. And now Russia’s invasion of Ukraine has caused a wave of migration from the north, with Ukrainians seeking asylum.

None of these sociological and demographic shifts, of course, excuse the murder of people on the street. Rage at the lackluster economy, the rising cost of living, and the more than two-and-a- half-year-old pandemic is being misdirected toward easy targets – immigrants from poorer countries. Especially toward those who stand out by their skin color. This seems to be a global phenomenon – blaming dark-skinned outsiders for taking jobs, for crime, and for importing their unfamiliar dress, religious beliefs, and customs.

The United States has had its own horrific chapters in history of discrimination and mistreatment. Officials at Ellis Island in the 1920s classified southern Italians as negroes. Federal law prohibited Chinese from immigrating for decades before that. And the subhuman treatment of Black people is a continuous thread since the founding of the country.

Just as in the U.S., some political figures in Italy play to the base beliefs of their followers by whipping up desire for scapegoats. Consequently, a random attacker beats to death another random person for no reason other than that the victim looks different.

Culpable also are the people who stand by making videos so they can be the first to post a live murder online, rather than intervening to stop it. They need to be tracked down and punished for their inaction. The live daily action in the satirical film The Truman Show has transmogrified into a sick spectator sport of brutality. Selfies for sadists. Social media platforms should be taking these videos down and banning the people posting them.

The perpetrators are sick criminals. The amateur videographers are enablers. The former should be in prison, the latter publicly shamed. All of this fills me with great sadness, as I watch a long cultural tradition of compassion in Italy decline.

Mark Hinshaw
Mark Hinshaw is a retired architect and city planner who lived in Seattle for more than 40 years. For 12 years he had a regular column on architecture for The Seattle Times and later was a frequent contributor to Crosscut. He now lives in a small hill town in Italy.
Previous article
Trump’s Revenge: Joe Kent Edges Ahead of Jaime Herrera Beutler
Next article
Reform the Supreme Court? Heh! A Classic Catch-22