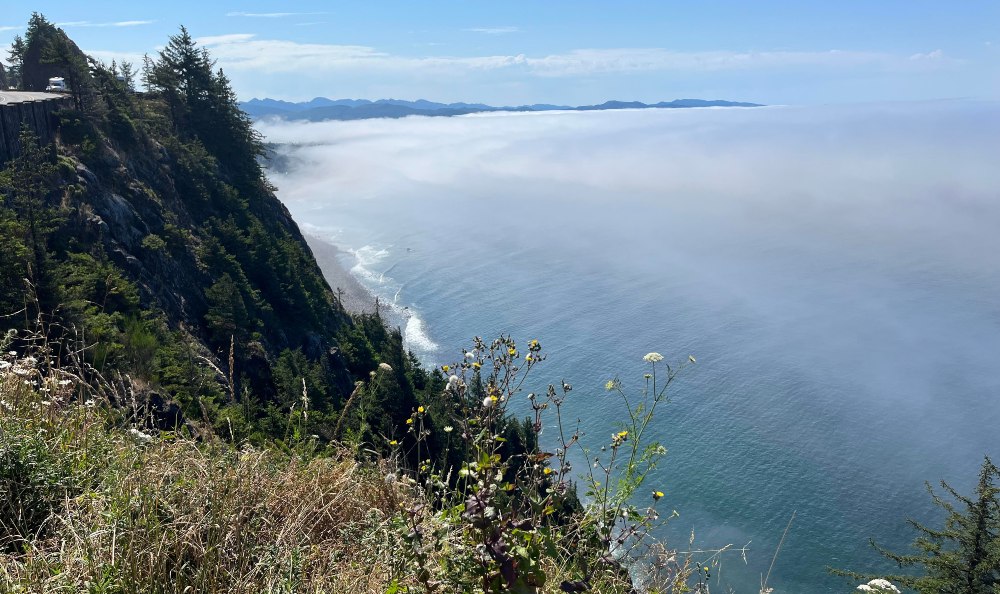 I am sometimes asked when I am back in Seattle what it’s like to live in a small town on the Oregon coast. It’s a question I wrestle with. Like the tides, my answer changes.

My wife Lynn and I live in the Pacific village of Manzanita. Our home sits on a hill called Classic Ridge, at the end of a gravelly pot-holed road, with spectacular views of Neahkahnie Mountain. We can’t see the ocean from our deck, but we can hear it – loud-whispering waves in summer months along seven-miles of white sandy beaches and wind whipping through trees nourished by almost 100 inches of rainfall a year.

The breathtaking beauty of the place is what drew us here, and is, largely, what keeps us here. We’ve traveled widely, and nowhere have we found this unique confluence of ocean, mountains and forest. We bought the place in 2015 after vacationing here every summer for more than 20 years, and moved here full-time at the onset of the COVID pandemic. More about that later.

Our town has about 1,200 homes, many of them used as vacation houses or leased through management companies as short-term rentals. The number of full-time residents is estimated to be about 600, but no one knows for sure. Manzanita has long been a staunchly Democratic enclave, surrounded by more conservative communities. Its residents are largely white and well-educated; the average age is 65.

Activity here centers on the outdoors – hiking, boating, surfing, fishing, golf. There is a gentle rhythm to our days, anchored by long walks at the beach, rain or shine. Lynn competes on a dragon boat team called the TideRunners, and I work out every day at the neighborhood gym and community center. We volunteer at the local arts center and have gotten involved in local politics, which increasingly focus on the explosive growth in the region and the growing divide between wealthy second-homeowners and long-time residents who find it tough to make ends meet.

When we moved here, there was just a smattering of other homes on our block, and one was under construction. Now, seven others have joined the club, adding to the size and depth of the potholes and obstructing some of the views. Wherever you go in town, you will see construction. Visitors don’t need straw hats. They need hard hats.

From dawn to dusk, concrete trucks, trucks laden with lumber or sheetrock or piping materials, paint trucks, plumbing trucks, electrical trucks – you get my point – rumble up and down the hills. Houses are rarely put up for sale, and when they are, they’re gone in a flash. As a result, people hungry for a slice of coastal living are clearing tree-studded lots and building their dream homes.  I often tell Lynn there must be a law written somewhere that says one is not allowed to build a home here that is less than 5,000 square feet. I exaggerate, but not terribly.

I remember the beginning of this trend. We were renting a seaside cottage one year and I awoke to the sound of hammering. Work on what we’ve since called “the monstrosity” had commenced – a mansion that dwarfed all the surrounding homes, with vast windows offering a birds-eye view of the roaring blue Pacific.

For years, this oversized home served as a landmark for beach-goers. You always knew where you were, even in dense fog, once you located “the monstrosity.” Now that home has plenty of company. Oversized houses, many of them rentals, line the beach. The increasing number of short-term rentals (STRs) has become a divisive issue. Once a way for second homeowners to help cover the bills, the rental homes have become a lucrative business operating not just in summer, but year-round.

Larger and larger homes, accommodating more and more visitors, are replacing beach cottages and creating parking, noise and traffic issues. Communities to the north and south have limited short-term rentals and there is pressure to do likewise in Manzanita. This year’s mayoral race will almost surely center on which candidate hates or doesn’t hate STR’s. Betting odds are that the candidate who favors imposing moratoriums or outright bans on STR’s will win. It wasn’t long ago that a contested race for mayor or a spot on the four-member council was a rarity here. Those days are over, as polarization has infected even little Manzanita.

We discovered Manzanita 28 years ago, when my wife was pregnant with our daughter Mariel. A colleague mentioned the place, and we came to have a look on our way down the coast. We fell in love and returned every year to vacation, eventually buying a place of our own.

I remember, back during our Saturday-to-Saturday summer sojourns, when Mariel was just a little girl, we rented a place on Beach Street. It was quite small, but we didn’t care. It was practically on the sand, and at the end of day, that’s what matters. Some years, we were joined by our good friends, Mike and Karen and their two kids. We’d take shelter in a sandy cove to minimize the winds – yes, the winds are legendary here – and play for hours on the beach.  The first night, dinner was always pizza at Marzano’s. The second or third, it was off to the Sea Shack, or The Deck, as I called it, for fish and chips overlooking Nehalem Bay.

A whole week! I loved every minute of it and never wanted it to end. The whispery surf, the runs on the beach, the first time Mariel donned a wetsuit and learned to boogey-board, Frisbee tossing in the cold ocean, fires at night, with marshmallows and chocolate and Graham crackers.

“We sing and dance forever and a day.”

The pictures Lynn and I took captured all those wonderous summer weeks. The exhilaration of it all. Life filled with promise and hope. I grew up in the Bay Area of California and have lived in large cities most of my life; we spent 25 years in Seattle. So I sometimes miss the little things I took for granted in the big city.

For one, I miss sitting in a coffee shop with the New York Times. No inside tables any longer, thanks to Covid, and few outside benches either. In Seattle, there is an endless choice of restaurants. We’ve got a handful here, and they operate fewer hours than they used to, and frankly, even I can grow weary of halibut burgers at The Big Wave of fish tacos down at the San Dune Tavern. As for grocery shopping, we have two local markets, both pretty good. But hey, sometimes you just want to meander through a Trader Joe’s.

It does seem that everyone has a pandemic story to tell. Now, if you’ll oblige me, it is my turn.

On March 15, 2020, the first official day of the Great Pandemic – unhappily, it fell on my daughter’s 26th birthday – we were in our home in Manzanita. Our mayor, Mike Scott, and other mayors up and down the Oregon coast, let it be known to visitors that they’d best be out of Dodge by sundown. It was a time for caution, not tourism. Electronic signs blasted the announcement. One God-fearing patriot, in his black pickup truck, noticed Lynn’s Honda CRV and its Washington plates parked at the beach, and gave her the finger.

Meanwhile, second-home owners like Lynn and I – “residents in training,” as our friend and councilman Jerry Spegman likes to say – were asked to choose and choose quickly: Stay in Manzanita for the unforeseeable future or head back (and don’t let the door hit you in the ass on way out) to where we came from. In our case, that was Seattle, 222 miles north, a four-and-a-half-hour drive if the never-ending horror show on I-5 around Tacoma is moving beyond a crawl.

We stayed the night and left a day or two later, then returned to Manzanita on occasion when no one seemed to care anymore. At some point, we stayed put, dutifully masking up whenever we joined the masquerade ball on Laneda Avenue, the town’s bustling main street. We bought groceries from the Little Apple (Manzanita in Spanish means “little apple”) and often dined on takeout pizza from Marzano’s or Thai food from the Mighty Thai. As in many desirable locales, the pandemic enabled many people to work remotely, which has its ups and downs in our little slice of heaven.

It used to be that visitors arrived by the car-load at the beginning of the weekends during summer months, and usually Mondays and Tuesdays, and often Wednesdays, were relatively quiet. The tide receded and the town was grateful to catch its breath.

No more. Now it seems like visitors are here all week long, all year long. Of course, it’s good if you own a business and have workers to help your run it. For locals, though, well, let’s just say it’s no day the beach. Tourists crowd the town’s main street, overloading the diminishing number of businesses and restaurants, most open fewer hours then they used to be, and all of them hard-hit by the pandemic and struggling to find help. The lack of affordable housing fuels the labor shortage, and sad to say, there is no end in sight. The region’s elected leaders wrestle with the issue but haven’t found a way forward.

But even in the worst of times, there is the stunning raw beauty of the northern Oregon coast. The towering rock formations that rise from the sea, the luscious green mountains and valleys, the fog that drifts across Neahkahnie like the steamy smoke of a locomotive, and the magical ocean itself, always changing, yet never changing. Never taken for granted. There is hardly a day that, either walking or driving a half-mile down to the beach, that my breath is not stolen away by the sight of the swirling sea. Every day, it seems, the tides change, and so does the color of the ocean: sea-green, grey, silvery, and every shade of blue.

We wake each morning to the twinkling sound of birdsong. There are owls, hooting in deep tones, hidden in the trees outside our bedroom window. Racoons occasionally pay a visit if the trash can isn’t secured. Deer are still plentiful in the forests, and we can only hope it will stay that way.

Life in Manzanita. Well, it has its moments.

Ellis Conklin
Ellis Conklin spent decades as newspaper man, mainly in Los Angeles, Seattle and St. Louis, having worked at the Los Angeles Herald Examiner, United Press International as a national feature writer, and the Seattle Post-Intelligencer. At long last, he and his wife settled in Manzanita, Oregon. Here, Ellis continues to root for his beloved San Francisco Giants.
Previous article
How Grand Opera Almost Came to Our Northwest Forest
Next article
State of the Union: The Lake that Connected a City