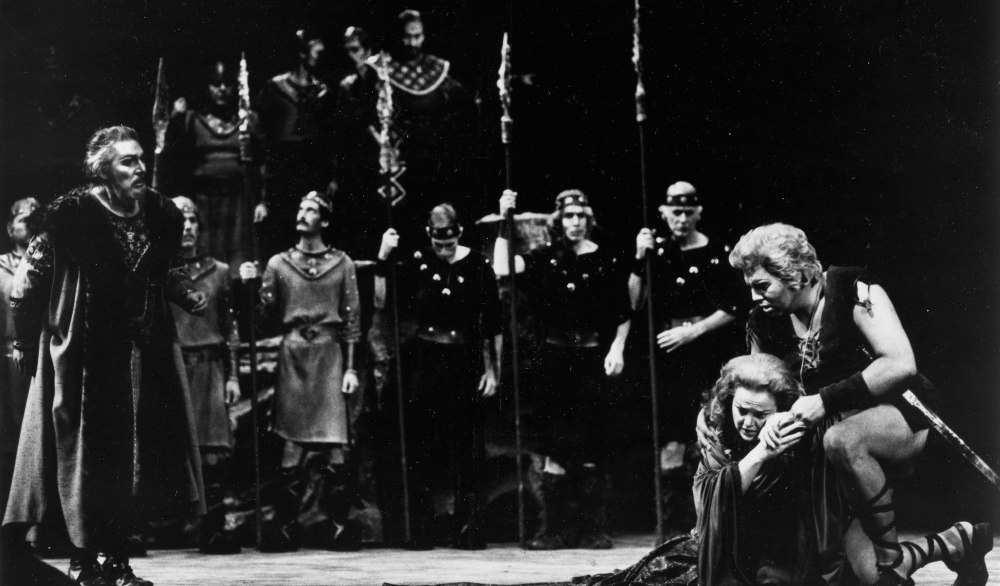 After sitting through 4-5 hours of Tristan Und Isolde under the partially exposed roof of the Santa Fe Opera House, I began to see the sense in Richard Wagner’s stormy and violent story of Irish princesses and Cornish kings.  The New Mexican monsoon season had passed, the evening was clear and crisp, and the bars and restrooms were nearby.  While ruined castles with secret doors and staircases loomed on the stage, our seats also provided a restful side-view of a dimming sunset and blinking star or two.

While focused on the Santa Fe stage in the cool night air, I was reminded of Glynn Ross, Seattle Opera’s founding director in the 1960s, and his dream of a “Festival in the Forest.”  The merging outdoor-indoor Grand Opera idea in Seattle came within an inch of occurring in Federal Way.  Like Santa Fe’s famous brick-colored hillside home, Ross described a Pacific Northwest entertainment site where the audience gathered in a sylvan setting.

Glynn Ross also eyed his “Festival in the Forest” in hard economic terms.  First, he assumed that most vacationers were relatively affluent and had money available to find and reach innovative entertainment.  In the case of Santa Fe, the founders and most attendees were and are well-off.  That opera experience is high on the list of “to do” events in New Mexico.

Although audience attire today at the Santa Fe Opera House demonstrates whatever is comfortable, in an earlier era most attendees dressed to the nines, not unlike New Yorkers at the Metropolitan Opera.

Ross grew up in a Norwegian farming environment.  After his father’s death he studied theater in Boston, then served in the U.S. Army.  In 1948, he joined the San Francisco Opera as stage director.  During this period, he staged operas in the Bay Area and at the famous Teatro di San Carlo in Naples, Italy.

In 1964, Ross accepted the position of director of Seattle Opera.  That Pacific Northwest city was still basking in international attention brought by 1962’s World’s Fair, Century 21.  The excitement of that time encouraged Seattle to create its first home-grown opera company.  The relative success of local opera convinced Ross that more musical opportunities were at hand.  The “Festival in the Forest” rose from that excitement, abetted by the dynamic personality of  Ross.

A few local nay-sayers to Ross’s dream voiced concern about competing with local established musical and theater events if another “Grand Event” emerged.  Support for Ross’s “Festival” appeared in the form of substantial business figures who listened closely to Ross’s pitch at private clubs, fraternal organizations, churches, and civic groups.  One supporter was Seattle developer Jim Douglas who took the unusual step of asking forest products giant Weyerhaeuser to pledge 30 acres of its Federal Way campus for Ross’s project.

Weyerhaeuser was the largest timber marketer in the world, with a product catalog that included raw timber to structural supplies.  Its new 500-acre site in Federal Way could include ample acreage for recreation and entertainment.

However, the economy was changing, and Weyerhaeuser reorganized as a real-estate investment trust (REIT), focusing on its real estate holdings and profitable subsidiaries.  Glynn Ross’ “Festival” hopes evaporated and he was sent packing at the Opera. Glynn Ross died of a stroke on July 21, 2005

The Weyerhaeuser King County Aquatics Center today rests on the original “Festival in the Forest” site.  Other local “outdoor” entertainments include the Gorge amphitheater, the White River Amphitheater, MaryHill winery, plays sponsored by the Mountaineers in several forest clearings, and musical performances on the Olympic Peninsula, to name only a few.

Santa Fe Opera is a rare institution, supported by a deep-pockets board and guaranteed influx of tourists to the exotic sites of New Mexico.  Those factors failed to materialize for Glynn Ross and his dream of music in a natural setting.

Junius Rochester
Junius Rochester, whose family has shaped the city for many generations, is an award-winning Northwest historian and author of numerous books about Seattle and other places.
Previous article
Fukuyama’s New Book: Standing Up for Classic Liberalism
Next article
Man Oh Manzanita!