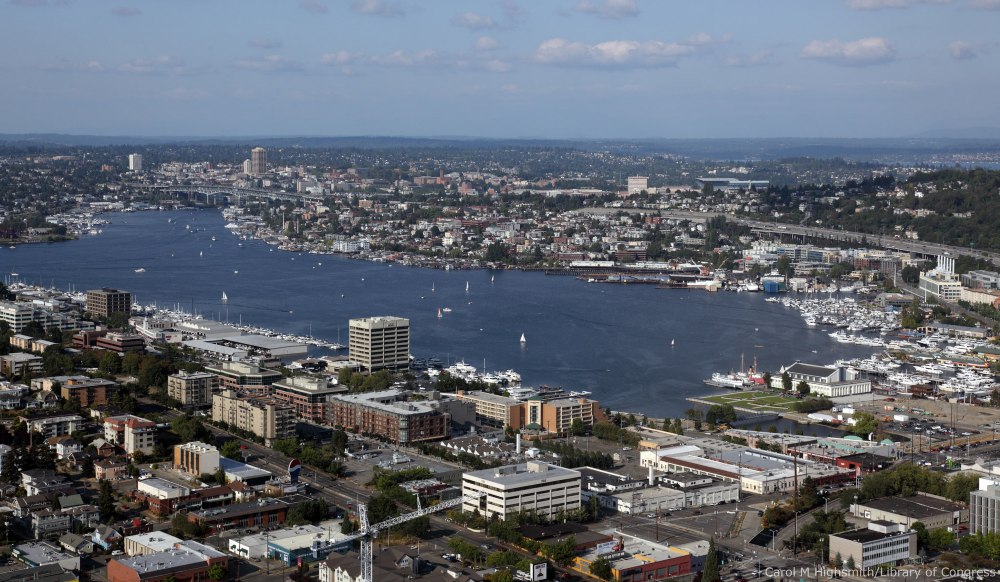 When Seattle residents and visitors wander through the city’s by-ways they inevitably pass by or over the waters of Lake Union.  This connecting link to salt and fresh water sources – hence the term “Union” – has seen everything.

Perhaps 15,000 years ago the raw material for Seattle’s foundation was buried under glacial ice.  About 12,000 years ago the last ice blanket began to recede.  In its wake the pressure of the ice cut the north-south channels of Puget Sound and the nearby lakes.  Lake Union arrived as a small glacial hollow formed by the Vashon Glacier.  Remaining deposits of rubble, sand and clay joined the changing climate to produce the lush green that in turn provided livelihood for Native American residents as well as for deer, elk, bear, cougar, trout, bass, perch, and catfish.

Fir, alder, cedar, and laurel were common in the forested slopes around Lake Union.  Moss and ferns covered the floor of the woods.  Drainage from the hillsides seeped into marshlands at the south end of the lake, a perfect home for waterfowl.

In her book Pig-Tail Days in Old Seattle, Sophie Frye Bass describes rafting on a pond at the present site of Ninth and Howell in the 1870s.  A small stream descended along what we know as Boren Avenue.  Trillium, red current, Oregon grape, Forget-me-nots, snowy syringa, and honeysuckle adorned the woods.

Puget Sound Natives, likely migrating from the north in the 12,000 years ago, found a perfect home on the shores of Lake Union.  Those first peoples became river, lake, and sea dwellers.  The bounty was everywhere.  The late Pearl Warren, descended from the Makah tribe on the Olympic Peninsula, recalled hearing of salt and freshwater Natives gathering at a meadow stretching from the present Seattle Center down to Lake Union (later called “Potlatch Meadows”).  Twentieth century construction crews occasionally uncovered shells and bones from a long-ago Native village site.  Chief Sealth put it this way: “Every hillside, every valley, every plain and grove is sacred in the estimation of my people,”

Early contact between the original settlers and the Native inhabitants was mostly benign and respectful.  In time the Native American life was interrupted, then all but extinguished.  This fatal process began in the 17th and 18th centuries when explorers brought diseases for which Natives had no immunity.

Pioneer David Denny began to develop his claim which reached the edge of Lake Union.  His wife Louisa Boren planted sweetbrier seeds and sold produce to other Euro-American newcomers.  While exploring his claim, David Denny found a deposit of coal, but it proved too small to work.  He also offered lots for sale on his claim near the lake.  Frame houses with picket fences and gardens began to appear among the stumps and underbrush between Lake Union and downtown Seattle.  In 1875 David and Louisa Denny donated five acres to the new city as Seattle’s first city park, called Denny Park.

Most early Seattle neighborhoods grew when a developer built a streetcar line to their property.  In the 1880s, a “pleasure grounds” rose on the south shore of Lake Union, involving walks, swings, a bathing beach, dance hall, and wharf.  Steamers crossed the lake to the new mill town of Fremont.

When the Lake Union to Pike Street (downtown) route was abandoned in the 1870s it became a walking path, later a wooden boardwalk.  Among its users were University students seeking botanical specimens.  That route later became Westlake Avenue.

Before the end of the 1890s, iron-working, machine shops, brickyards, and boarding houses appeared, followed by eating places, grocery stores, taverns, and a Chinese laundry.  The lake boasted an unusual mix of people and activity.

Suffrage, prohibition, political radicalism thrived.  Dave Beck was born here, raised by his mother who worked at one of the local laundries.  He returned to the neighborhood after World War I, became a laundry truck driver, and joined the Teamsters Union.  Beck eventually rose to become president of the Union and a national force in the U.S. labor movement.

In 1910, Mayor Hiram Gill suggested the ultimate regrade project: the sluicing of Queen Anne Hill and filling of the lake.  An angry citizens’ movement put a stop to that scheme.  Instead, completion of the Ballard locks and Lake Washington ship canal – connecting fresh with salt water – ensured that the maritime industry would expand on Lake Union.  A pleasure craft industry expanded, drydocks were built, fish processing plants appeared.

In recent years Lake Union has become an industrial focal point.  Pleasure boats, kayaks, and windsurfers abound.  Boat races, parades, houseboats, and lighted ships keep the lake alive.  Gasworks Park and the String of Pearls parks along the eastern shore have made the city’s central pond a strong attraction and a vibrant urban neighborhood.

In my time I have joined Lake Union perimeter walks sponsored by the Pacific Northwest Historians Guild; chugged across the water aboard the 1922 “Virginia V,” last of the “Mosquito Fleet”; motored among the yachts on a Post Alley excursion; and docked under the University Bridge while giving local history talks aboard a small cruise ship.  The clutter, gentle splashing, houseboat colonies, and kaleidoscope of boat hulls brings the past to the present on Lake Union.

Junius Rochester
Junius Rochester, whose family has shaped the city for many generations, is an award-winning Northwest historian and author of numerous books about Seattle and other places.
Previous article
Man Oh Manzanita!
Next article
The Book John Steinbeck Almost Wrote About the Pacific Northwest