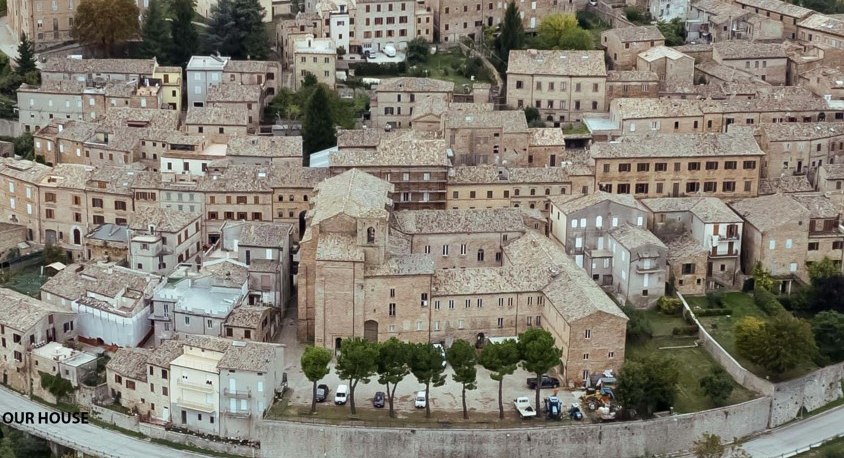 Our hilltop village is located outside the zone that is most susceptible to earthquakes, colored red on seismic maps of Italy. Nonetheless, two intense earthquakes in 2016 severely damaged at least a dozen houses. One, less than 50 meters away, almost totally collapsed, its brick lay in piles for two years until two of its three floors were rebuilt.

Our house is built into the medieval-era city wall, with its heavy stone walls over a meter thick. Thankfully, it barely saw any damage, not even cracks in the plaster walls. But the house directly across the lane from us became a bit more deteriorated with shattered bricks and cracks. Things move slowly in Italy and only recently has this home been repaired.

Our neighbors Francesco and Paolo own two of the independent apartments which make up the building, each with their own entrance. So, before work could even begin, they first had to agree to share the costs. For some people, reaching an agreement on this point can, in and of itself, be difficult and contentious. A large palazzo in the center of town was too heavily damaged to be safe for occupancy. It remains untouched to this day, because the owners cannot agree to a fair distribution of the costs. Meanwhile, no one can live in it, and the scaffolding securing the building is quite an eyesore that is not likely to go away for a good long while.

Two people, however, have a better chance of agreeing than six, so the house across from us had a thorough renovation this past summer – inside and out. It was completed just this past week; the outside masonry walls have been completely restored. For three months, we watched a crew erect scaffolding and then carefully remove bricks that were shattered. This meant using jack hammers for hours. That particular sound seemed like massive dental work was being done a stone’s throw away. Not a pleasant way to wake up at 7am in the morning.

We politely asked the contractor if they could refrain from starting up the noisy compressor and the hammering before 8am. He apologized and we soon heard him instructing his crew to be more mindful. Living in a different culture, it’s sometimes hard to determine what the protocol is when you have a complaint. Perhaps we could have complained directly to the Comune – we chose to ask him directly, and he graciously accommodated our request.

During the day, however, it was certainly noisy, with the sound of the air compressor and jackhammer echoing off the masonry walls along the street. At one point the contractor asked if he could use our parking area (which is big enough for two cars), as a staging area for his materials, his small mortar mixer, and his power saw for cutting bricks. Since the town has a big parking area nearby, we agreed. Thereafter, part of our lot became a construction zone as well, with the street in between closed to passing traffic, and my wife regretfully parking our brand-new car up the street.

Walking out any direction meant dodging around serpentine cables and hoses, whirring saw blades, and pounding hammers, a big truck, wheelbarrows, and piles of brick either broken or new. Plus, enduring a fine, chalky dust that sifted through the fine mesh fabric covering the scaffolding and coated everything on the entire street. Eventually, a hefty day-long rain washed away most of the gray dust coating every surface as well as the plants we have outside and in the garden.

If he saw us threading around his crew, the contractor would apologize, and quickly move what he could out of our path. One day, he promised that when they were done, he would have the crew restore our parking area as thanks for our patience. We thought he meant they would clean it – after all, it was covered in brick dust and chips.  We’d been unhappy about that space for years, muddy with puddles in the winter, dusty in the summer – but it was pretty far down on our priority list of projects.

Recently the renovation work finally was drawing to a close. The scaffolding came out, revealing an exquisite new wall of expertly hand-laid masonry. The windows had new shutters and painted trim; the doors were outfitted with new lintels. We now have a pleasant and nicely-crafted wall to look at across the street. Which in our case is but a few meters away.

One day last week, we went out to a local street market to buy vegetables and some clothes from vendors we frequent. During those few hours, the contractor had cleared everything out. But he didn’t stop there. He had his crew tear out all the weeds and grasses growing up through the old and barely existent gravel in our parking area, and they applied weed killer. Then he brought in fresh new gravel which was spread out and raked into a smooth surface within minutes by his whole work crew.

When we arrived home, they were just finishing up, to our complete surprise and delight – my wife promptly made the whole crew coffee with a liqueur chaser – known as ‘caffe completo’ here – to wide smiles all around!

We certainly had not asked for such a gesture, nor did we expect anything close to this level of finesse. Unexpected acts like this constantly remind us about how people in this culture value collective responsibility, that goes well beyond the limits of one’s own home.

It’s sometimes difficult to shake off a lifetime of experiences with fellow Americans, who are obsessed with their personal rights, or who choose to ignore any responsibility to their community – after all, who hasn’t heard about a neighbor staking out their property line or screaming about a real or perceived infringement on “their property”.  Signore Paolucci, the contractor, had no obligation to fix our muddy and disreputable parking space, any more than we were obligated to graciously forgo the use of it all summer so that he and his crew would have room to work more efficiently and safely.

We choose to emulate the Italian way of being a part of a community and treating our neighbors as an extended family.  In the end, our smiles won us a new parking space.

Mark Hinshaw
Mark Hinshaw is a retired architect and city planner who lived in Seattle for more than 40 years. For 12 years he had a regular column on architecture for The Seattle Times and later was a frequent contributor to Crosscut. He now lives in a small hill town in Italy.
Previous article
Pramila Jayapal Makes a Whistle-Stop Appearance at Horizon House
Next article
Former Chief Carmen Best’s Book: Why I Quit