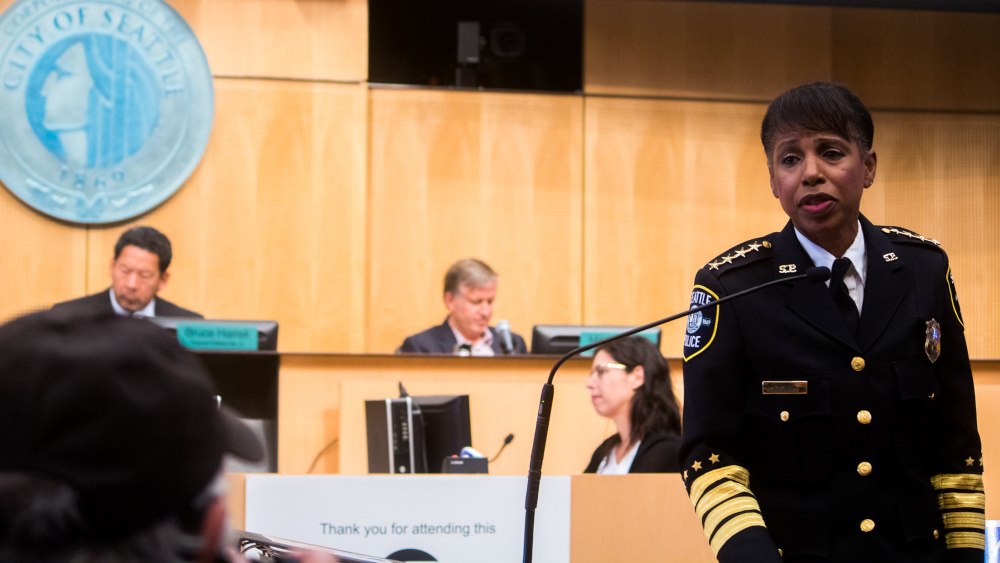 Former Seattle Police Chief Carmen Best’s book, Black in Blue, opens by describing a cold spring morning in 2018. Mayor Jenny Durkan had summoned Best, then interim chief of police, to her office. The mayor delivered the news that Best had been passed over: She was not one of three finalists for the chief’s job.

Durkan told Best she knew how she felt because she herself had once been overlooked for promotion. Best, who felt she was best qualified of the final five candidates, wasn’t given a reason for her rejection. Feeling tears welling up, she left to avoid the press conference called to announce the three finalists.

At the time, there were various unconfirmed theories as to why Best wasn’t chosen. The one that makes the most sense was that Durkan’s search panel had prioritized candidates from outside the department, but Best was very much a popular inside choice.

Best’s failure to make the top three hit the community hard. But here the book’s choppy narrative changes course to recount Best’s life to that point: growing up in Tacoma, losing her race for high school president, enduring racist slights, serving in the Army, working at an insurance company, becoming a police recruit and rising in the ranks to serve as Chief Kathleen O’Toole’s deputy chief.

When the narrative finally returns to Durkan’s selection of a police chief, the book tells the story of how Best’s allies and mentors, including former Chief Gil Kerlikowski, leaped to her defense. Lobbying by people such as the influential community activist Rev. Harriet Walden paid off. Best was added to the list when one of the finalists dropped out. As Councilmember Mike O’Brien observed, “You managed to pull in a range of folks.” At her Aug. 13 swearing in, Council President Bruce Harrell told her, “You’ve earned this.”

Best’s two years as chief were not easy. She had multiple challenges, including mass shootings and the coronavirus pandemic. Then came the May 25, 2020 murder of George Floyd, which produced in Seattle weeks of demonstrations, protests, and the demands to “Defund the Police.” Seven councilmembers joined calls to cut the force by 50 percent.

Chief Best insists that Black in Blue wasn’t meant as a “tell-all.” Nor was it written trying “to pick a fight with the Seattle City Council.” But in the book’s concluding chapters, Best argues her case, detailing the council’s dismissive treatment of the police force and of the first African-American woman to lead it.

After the council moved to slash police salaries and drastically reduce the department’s budget, including a deep cut to Best’s pay, Best says she realized she had no choice but to resign. She writes, “I could see the writing on the wall: the city council was going to let me be the scapegoat for mass layoffs… I was not going to let them dictate my legacy.”

Her decision to quit followed closely on her plea to councilmembers asking them to call for an end to tactics such as the large protest that targeted her Snohomish residence. She deplored the use of “mob rule as a new way of doing business.” Best claims council’s response to her request was silence. (Councilmember Lisa Herbold disputes that allegation, saying an e-mail was sent.)

However the council’s perceived failure to respond merely added to incidents of rude and demeaning treatment. Although Best doesn’t name offending councilmembers, there are clues. She says one councilmember — the one who had once berated the department for not doing enough about policing fireworks — was now calling for a 50 percent defunding of the department. Another “who was the age of my daughter treated me in a manner that some considered racist, cross-examining me during a briefing as if I was on trial.”

Best reports that, during her 28 years on the force, she had never seen an instance where a police chief and command staff were totally ignored. She says, “l couldn’t help thinking: Are they dismissing me because I am a Black woman or is the city council refusing to include me because they don’t want to be seen as working with the police?”

The best parts of her uneven book come in the small, revealing incidents such as Best’s talk with a daughter disturbed that her mother was serving as chief of police while she, the daughter, was participating in protest marches. Best explains her own divided feelings, revealing a strong backing for Black Lives Matter while continuing to support the police force and acknowledging the need for reform. The book spells out Best’s remedies including “hire more women” and “multiple background checks.”

When documenting events of the spring and summer of 2020, Best’s book is in many ways a disappointment. It jumps around chronologically, combines incidents that took place days apart into a single episode, and totally ignores the deaths that occurred at CHOP, the Capitol Hill Organized Protest zone.

Blame for those flaws may rest with an unnamed “collaborator” that Best hired to keep her on track. That sounds like a ghost writer and, if so, it was not a good choice. The book leaves unresolved mysteries of Best’s tenure: What became of Best’s text exchanges that somehow disappeared? What exchanges did Best have with Durkan during that protest summer? And when did Best learn about the incident commander Thomas Mahaffey’s decision to abandon the East Precinct?

Best says although she originally believed that Durkan had gone behind her back and ordered the precinct abandoned, she learned that assumption was wrong.

Best has parried complaints about Black in Blue. She replied defensively that “it is my book and my perspective,” and that “those who quibble should write their own book.”

Since her decision to resign the chief’s post, the 56-year-old Best has done well, jump-starting her career. She has been hired by KING 5 as a law enforcement commentator and by MSNBC as a contributor. She appears on national television to talk about her 175-page book and is raking in top rates for lectures and speeches.

When mayor-elect Bruce Harrell is asked if he’s considering reappointing Best to head the police department, he’s said he “won’t rule it out.” There also are reports that Best is on a short list of prospects to manage the New York City Police Department. Given the lopsided contrast between New York’s 36,000 sworn officers compared to Seattle’s 1,300, that’s quite a leap.

Jean Godden
Jean Godden wrote columns first for the Seattle Post-Intelligencer and late for the Seattle Times. In 2002, she quit to run for City Council where she served for 12 years. Since then she published a book of city stories titled “Citizen Jean.” She is now co-host of The Bridge aired on community station KMGP at 101.1 FM. You can email tips and comments to Jean at jgodden@blarg.net.
Previous article
An Unexpected Kindness
Next article
Light Against the Dark: The Faces of Fanaticism