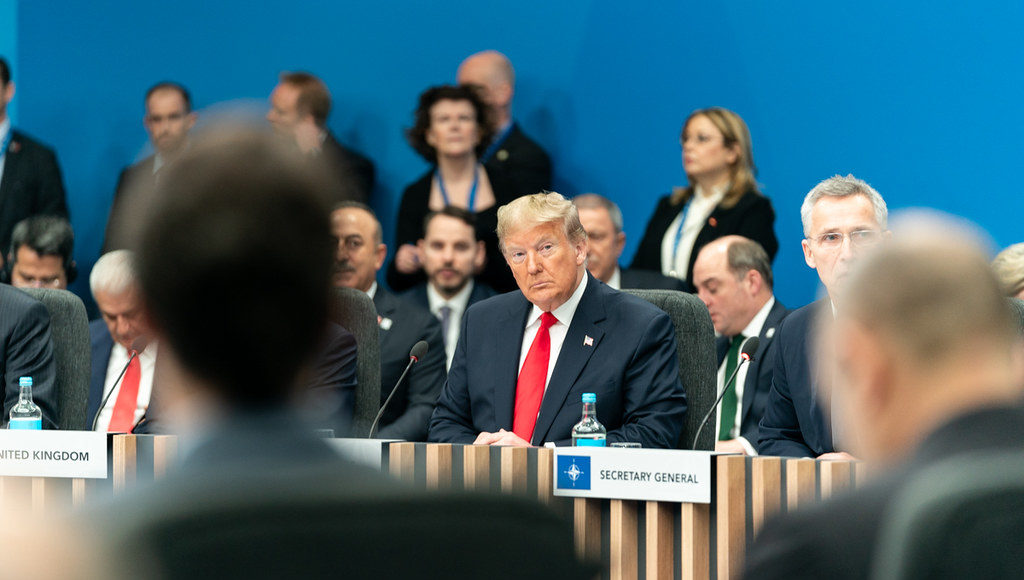 Defining NATO Summit Success Down: Avoiding Failure In The Age Of Trump

Leaders of the 29 NATO member states gathered near London this week for a summit that many feared would expose more cracks in the world’s most powerful defense alliance.

Cracks don’t begin to tell the story of a 70-year-old collaboration headed for disintegration if the era of “America First” continues. The summit that concluded Wednesday succeeded only in averting failure.

President Donald Trump has made clear his doubts about the North Atlantic Treaty Organization’s value to the United States. He takes the view that U.S. troops can fight their own battles without help from other NATO states that he regards as a financial drag on his country.

Concerns have intensified within the alliance about Trump’s commitment to maintaining a bulwark against Russia by aiding Ukraine in its war against Russian-backed separatists. The president’s withholding of nearly $400 million in congressionally approved defense aid from Kiev is at the heart of the U.S. House of Representatives’ impeachment inquiry on Trump. It has also shaken allies’ faith in the United States as a reliable adherent to foundational alliance strategy.

Trump barreled into the summit on Tuesday with his transactional diplomacy on display, demanding that member states deliver on their commitments to spend 2% of GDP on defense by 2024 if they want the alliance to be there for them in the event of an attack by a foreign power.

Trump has alarmed NATO allies and much of the rest of the free world in observing that Russia’s 2014 annexation of Ukraine’s Crimea territory should be recognized as historically justified, departing from a core principle that post-World War II borders cannot be changed by force. His unchaperoned talks with Russian President Vladimir Putin on the periphery of other summits have intensified concerns within NATO that Trump doesn’t share a central strategic view that Russia is the leading threat to peace and security.

While Trump refrained from repeating his indifference to NATO’s Article 5, the unanimous commitment to come to the defense of any member state under attack, his insults against fellow leaders spotlighted the deepening internal disputes threatening the alliance. He called French President Emmanuel Macron “very, very nasty” for saying that NATO in the era of America First is suffering “brain death.” He called Canadian Prime Minister Justin Trudeau “two-faced” for making fun of his propensity for long-winded impromptu exchanges with the media.

A pool media video capturing Trudeau, Macron, British Prime Minister Boris Johnson and others gossiping at a Buckingham Palace reception for the NATO leaders went viral on social media and diverted attention, even in mainstream media, away from what little serious business was conducted at the summit. Another news snippet left viewers with the impression that Queen Elizabeth — through the sole medium of eye contact — had admonished her daughter, Princess Anne, for failing to greet Trump at the reception.

Those two videos grabbed the headlines in the United States and Europe, giving newspapers and broadcast news something with which to entertain audiences that are quick to turn off more sober analysis of existential threats confronting their collective security strategies.

The summit adjourned Wednesday with a declaration of success by NATO Secretary General Jens Stoltenberg, who downplayed the soap opera moments as distractions that get more media attention than the important work of the alliance.

“The strength of NATO is that we have always been able to overcome these differences and then unite around our core task to protect and defend each other,” he said after noting that member states have agreed to look into the pros and cons of developing space-based defenses and to evaluate their relations with China.

If Putin could have one wish granted, it would be for the demise of NATO. Since its formation in 1949, the North Atlantic Treaty Organization has succeeded where the Kremlin-controlled Warsaw Pact failed to keep its allies safe from foreign aggression and united in commitment to build democracies on the ruins of states vanquished in World War II and repressed during the Cold War.

This week’s summit succeeded only because it didn’t fail. The alliance has yet to devise a cohesive strategy for the age of seriously divergent member priorities and interests.

One decision made at this week’s summit could buy the alliance some time to do that: After meeting at the head-of-state level for each of the past three years, the alliance will skip a year – the last year of Trump’s current term as president – and convene the next summit in 2021, after U.S. voters have had a chance to reconsider the merits of America First.

Carol J Williams
Carol J. Williams is a retired foreign correspondent with 30 years' reporting abroad for the Los Angeles Times and Associated Press. She has reported from more than 80 countries, with a focus on USSR/Russia and Eastern Europe.
Previous article
Bye bye Kamala, Hello Pete: Why Buttigieg is Rising and Harris is History
Next article
Circle Of Life: Climate Change And Its Impacts On Northwest Animals