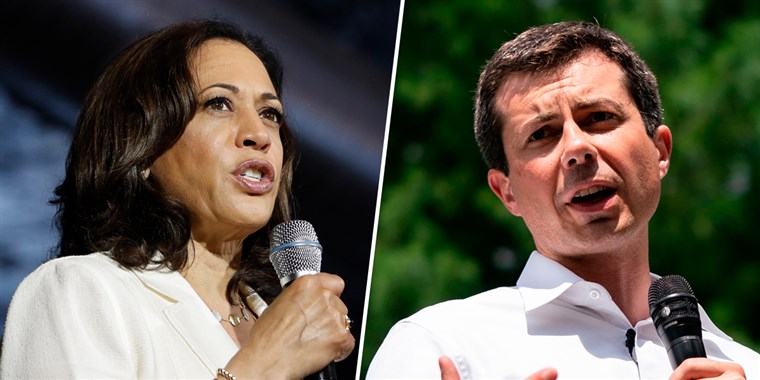 Bye bye Kamala, Hello Pete: Why Buttigieg is Rising and Harris is History

In the end, it was a mercy killing. Amid plunging poll numbers and harsh pre-death campaign obituaries in the national media, Kamala Harris bowed to the inevitable and announced today that she is ending her campaign for the presidency.

The biggest disappointment for me of this presidential race has been the utter disaster Harris made of her once promising campaign. I had long thought she has the highest potential ceiling of any of the Dems running, but she squandered all that potential by running the fakiest, most blurred, and strategically most misconceived presidential campaign I’ve ever seen.

She never had confidence in who she was, and in her political track record. She believed the national media and her close advisors, who claimed – in the face of the actual evidence – that all the energy in party is on the far left, and that Democratic voters across the board (as opposed to the noisy subset of educated, polarized white progressives) were hungering for radical change and progressive nirvana fantasyland policy promises.

She ran away from her record as a prosecutor and, apparently under her politically clueless sister’s influence, made the fatal mistake of assuming the uncompromising purist left commentary on Twitter is representative of the Dem electorate. She twisted herself into a pretzel trying to refashion herself as a cut rate Liz Warren, a transformation that was neither believable, advisable or necessary. Her appeal to more progressive voters was always going to be inherent in her identity as an accomplished, mixed-race woman who could present an uplifting, unifying message a la Obama, not in trying to con them that she is a maximalist lefty on policy.

She never figured out (well, maybe right at the end, when it was far too late) that her pathway was rooted in peeling away Joe Biden’s base by drawing a clear contrast between herself and Warren and Sanders; if she’d done that from the outset she’d be eating Biden’s lunch right now and rocketing to the top of the polls. Instead, she’s out and Pete Buttigieg (and to a lesser extent Klobuchar) is reaping those gains.

So why is Buttigieg succeeding where Harris so spectacularly flamed out?

For the last month or so, the political narrative-makers of the national media, all set to anoint Elizabeth Warren the inevitable nominee, has been fretfully tracking Buttigieg’s polling rise in the early voting states of Iowa and New Hampshire (and Warren’s decline). But only in the last week or so have they started to realize what has been driving the Buttigieg surge.

Since September, Buttigieg has been doing what all of the Biden-lane candidates, Harris included, should have been doing from the outset but — an abiding mystery to me — apparently were too cowed by Twitter to do: drawing a clear and sharp contrast with Warren and Sanders, painting them as ideologues bent on maintaining the endless, empty partisan warfare status quo in D.C. while advocating extreme policy positions that put them at high risk of losing the general election.

He’s done this not only on the campaign trail and in the recent debates, where he’s forcefully and incisively contrasted his “Medicare for All Who Want It” public option health plan with Warren’s support of a Medicare for All single-payer approach to reform, but in a series of TV ads airing in Iowa and New Hampshire. In those ads, Buttigieg never mentions Warren by name, but the contrast he is drawing could not be clearer.

In an initial salvo, he contrasted his general approach to politics, optimistic and inclusive, with Warren’s approach of seeing politics as an endless partisan fight. He cast himself as a uniter, Warren as a divider: “We will fight when we must fight but I will never allow us to get so wrapped up in the fighting that we start to think fighting is the point.” He then followed with a barrage of ads exploiting Warren’s huge vulnerability in advocating for an approach to health care that would force more than 150 million Americans to give up their current health care plans, whether they want to do so or not. Those ads, and that contrast, has been the rocket fuel of Buttigieg’s ascension.

While Buttigieg is the one scoring big now by doing this, for months this pathway was out there for the taking, big low hanging juicy fruit for any of the candidates to exploit if they’d had the self-confidence to tell the activist class – and its national media amplifiers at the Washington Post, New York Times, and the cablenets – to kiss off. A majority of the actual Democratic base (as opposed to the online social media base) was always going to be receptive to this line of argument, which is why Biden, who has been too inarticulate to draw this contrast effectively himself, has consistently led in the polling despite his worrisomely weak campaigning.

The media is finally clueing in to Warren’s vulnerability now, just as Buttigieg pivots away from that attack and has begun airing a new round of ads effectively hitting Warren (and Sanders) for advocating to spend public tax dollars to make college free for the children of the wealthy and the upper middle classes. That Alexandria Ocasio-Cortez is fuming is a good sign that Mayor Pete criticisms are landing.

Like all of the current crop of Dem candidates, Buttigieg has serious flaws. His governing experience is laughably weak. Moreover, the national media is correct that he has not yet demonstrated an ability to broaden his appeal to minority and non-college educated voters (though this never seemed to trouble them about Warren, who has the same problem). Those voters together comprise more than 60 percent of the Democratic primary electorate, and his campaign will founder if he doesn’t figure out how to connect with that silent majority.

But the lesson here is that campaign strategy matters. Understanding where Democratic voters actually are, and what they actually want in a candidate – which requires ignoring the left activist narratives both social media and the national media have been promoting – matters. So does failing to understand that.

That’s why Buttigieg is rising, and Harris is history.

Sandeep Kaushik
Sandeep Kaushik is a political and public affairs consultant in Seattle. In a previous life, he was a staff writer and political columnist at the Stranger, and did a stint as a Washington State correspondent for Time Magazine and for the Boston Globe, back in the olden days when such positions still existed.
Previous article
Why Giving Locally on Giving Tuesday Is More Important This Year
Next article
Defining NATO Summit Success Down: Avoiding Failure In The Age Of Trump