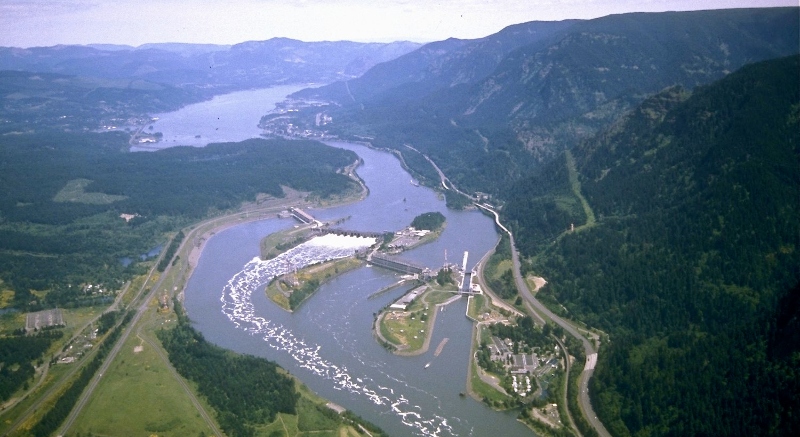 Circle Of Life: Climate Change And Its Impacts On Northwest Animals

Wind-driven wildfires force nearly 200,000 people from their homes in northern California.  Eleven thousand scientists warn that “The climate crisis has arrived and is accelerating faster than most scientists expected. It is more severe than anticipated, threatening natural ecosystems and the fate of humanity.”

And that’s just since the end of summer – business as usual in the new age of climate crisis.

This is all pretty scary even in the short run for folks who live in dry pine forests or by the shore.  If they knew what lay in store, it might be even scarier for neighbors of Northwest critters that need cold water or deep snow, like chinook salmon or Canada lynx.

Of course, if you want lower temperatures, you can just go higher in altitude or, in the northern hemisphere, in latitude.  But that won’t always work. The polar bear has become the poster critter for climate change because, although the sea ice on which it hunts has been melting, the bear is already in the Arctic.  It has no place to go. It has run out of up.

The National Audubon Society reported recently that computer modeling of 604 American bird species’ response to rising temperatures shows that two-thirds, including more than half the species in Washington state, are at risk.  As temperatures rose, Washington’s species gained range in some places, lost it in others.  If the bird lost more than it gained, it was in trouble.

“The most vulnerable species lose more than half of their current range and are unable to make it up with potential future range gain,” explains Joanna Wu, an Audubon society avian biologist and project manager.  “Climate” is more than just temperature, Wu says. She and her colleagues also looked at “things like mean annual precipitation, summer heat moisture index, future vegetation type under warming.”

What about Northwestern critters that don’t fly?  Take salmon, which are cold-water fish.  In theory, as spawning streams get warmer, they can just go higher.  But that’s not always feasible, says Daniel Schindler, a professor in the University of Washington School of Aquatic and Fishery Sciences, who holds the Harriet Bullitt Endowed Chair in Conservation at the UW’s College of the Environment. Streams leading to some higher elevations may be too steep for fish to navigate, he explains, and the beds may be too rocky.

Critters with big feet that have evolved to live in deep snow may have a hard time, too.  Take Canada lynx and their main prey, snowshoe hares. Without deep snow, lynx (and hares) lose their evolutionary advantage.  Generalist species may out-compete them in what used to be their special niches. New predators may come in and eat them.

Hares like to eat the tips of young pine branches.  They need trees tall enough to keep those branches above the snow, short enough so that a hare standing on snow can reach them.  That means young forests. Lynx hunt there. Lynx don’t like open spaces, though, and they need deep woods for their dens. So what lynx really need is young forest with older forest nearby; they can hang out beneath the larger trees, and venture out to hunt the hares.

And they need this habitat someplace where it snows.  As temperatures rise, they can find that snow by going higher.  But that means they have less habitat – think moving closer to the tip of a cone – and wider spaces between areas of habitat.

Therefore, says Conservation Northwest science and conservation director Dave Werntz, it’s important to create or maintain connection between patches of lynx habitat.  It’s also important to thin forests and remove underbrush to prevent the kind of big wildfire – something we’ve already seen increasing as the climate changes – that erase the fine-grained patterns of older and younger trees that lynx favor.

Wolverines don’t have those snowshoe feet, but they den where snow lingers into spring; good wolverine habitat has drifts until mid-May.  Werntz says that chances are the North Cascades will have plenty of suitable places for wolverines, although for them, too, habitat fragmentation may be a problem.  In general, he says, “things are going to get worse for wolverines but there are going to be some strongholds.  One of the best is the North Cascades.”

And then there are – or were in the Selkirks of northeastern Washington and may be again someday – woodland caribou.  They, too, have big feet, adapted to living in places where snow piles up. Standing on top of the snow, they can reach and eat the lichen that grows on big trees.   (South of the Canadian border, a lot of caribou habitat was destroyed and roads were built into the forest. Deer proliferated. Cougars showed up to eat the deer. Caribou were collateral damage.)  Caribou won‘t come back without a lot of help –and an adequate snow pack.

In their way, salmon are snow-dependent, too.  “People don’t think of snow as fish habitat,” Schindler says, “but of course it is.”  The cold water that fish need comes from snow melt. No lingering snow, and the water gets warmer – and it flows at different times of the year.

That’s a concern for the future.  And the future is already here. Is climate change already affecting salmon?  “The answer,” Schindler says, “is definitely ‘yes.’”

Joseph Bogaard, executive director of the advocacy group Save Our Wild Salmon, emphatically agrees. “It’s here and now,” Bogaard says.  “The impacts are here. They’re only going to get worse.”

But, Schindler adds, “with climate, context is everything.”  It produces “winners in some places, losers in others.” In Washington, Oregon, lower British Columbia, it produces losers.  The problem isn’t only the warming of fresh water – where, Schindler explains, higher temperatures boost fish metabolism, so that they need more oxygen, but also lower the oxygen-carrying capacity of the water. The problems are also along the near shore of the Pacific, where young fish go after they leave the rivers.

Off the coasts of Washington, Oregon, and lower B.C., the zooplankton on which young fish feed is brought to the surface by massive upwelling.  Higher temperatures suppress the upwelling, so that there’s less for young fish to eat. Off Alaska, young salmon don’t depend on an upwelling; there, warmer coastal water means more zooplankton, so the fish are doing just fine.

In Bristol Bay, Schindler says, warming has produced roughly three times as many fish as there were 50 years ago.  And “Bristol Bay salmon did just fine with [the huge area of warm ocean water known as] The Blob.”

Fraser River salmon – always the bulk of the fish caught in Puget Sound and eaten here by Southern Resident Killer Whales — haven’t been so lucky.  Schindler suggests that the drastic declines of Fraser River runs – the inexplicably huge sockeye run of 2010 was an anomaly – may have been due largely to the shortage of food for young fish.  The “best evidence,” he says, “is that it is a climate response.”

What happens to the rivers and streams will be crucial, too.  Forecasts for the Columbia Basin aren’t encouraging. Over the coming century, “a lot of the lower Columbia will become unsuitable” for salmon, Schindler says.

Like many other salmon advocates, Bogaard’s group has long focused on breaching the four dams on the lower portion of the Columbia’s largest tributary, the Snake River. These dams slow the river’s flow, raise its temperature, and impede passage of salmon to and from spawning streams in the mountains of Idaho.   Some of those salmon populations have been listed for years. And some seem crucial to the diets of Southern Resident Killer Whales. Last year, prominent scientists signed a letter to Governor Jay Inslee saying that recovery of the orcas might require breaching those dams – a warning that Ken Balcomb of the Center for Whale Research and other scientists sounded back in 2016.

It’s pretty simple.  Those Idaho spawning streams are the highest in the Columbia Basin (except for some in British Columbia that have long been walled off by the Grand Coulee and Chief Joseph dams).  All else being equal, higher elevation means colder water. Faster flow means colder water, too. Water impounded behind dams heats up, creating temperatures that are bad for salmon, good for some of their predators.  Also, faster passage downstream means the physical development of young fish – the change from freshwater to saltwater animals – is more in sync with their progression to salt water.

In time, the Idaho spawning streams above the dams – protected in federal wilderness areas – may be among the last in the whole  quarter-million-square-mile Columbia Basin that stay cool enough for salmon.

Now, 55 scientists  have sent a letter to Northwestern governors and members of Congress, arguing that breaching the dams is the only way to bring down already-excessive temperatures in the lower Snake and in the mainstem Columbia below the Tri Cities, too.

By now, 13 salmon populations in the Columbia River system have made the Endangered Species list.  Because of those listings, the federal government must prepare Biological Opinions (BiOps) on the operation of its Columbia River system dams.  So far, federal courts have rejected all five of them. The last rejection came in 2016, when U.S. District Court Judge Michael Simon ripped the federal agencies’ cynical approach to the process, saying that “[f]or more than 20 years . . .the federal agencies . . . have continued to focus essentially on the same approach to saving the listed species. . . Those efforts have already cost billions of dollars, yet they are failing.”

Simon pointed out that while the latest BiOp contained a lot of information about climate change, the document didn’t call for any new actions to deal with it.  The judge didn’t order the agencies to consider breaching the lower Snake River dams, but he noted pointedly that his predecessor, James Redden – who rejected three earlier BiOps – had urged them to do so.

Simon ultimately told the agencies to come up with a new Environmental Impact Statement and a new BiOp by 2021.  Last year, just in time for the mid-term elections, President Donald Trump arbitrarily moved the date up a year – so that a final decision should come out just in time for next year’s Presidential election.

Any chance that Trump’s banking on a commitment to breach or even seriously consider breaching those dams?  To do anything else for salmon or for other species menaced by climate change? Or, for that matter, finally to acknowledge that climate change exists?