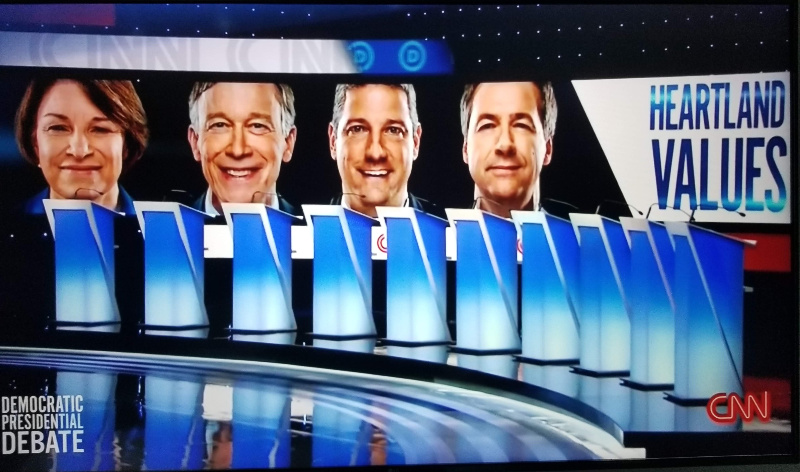 “No Matter What You Say, Republicans Are Going To Call You A Socialist.” So What Are You Fighting About?

Have to say – I hated the CNN open – “FOUR CANDIDATES FROM THE HEARTLAND… READY TO DO BATTLE…BERNIE AND ELIZABETH AT THE PROGRESSIVE EDGE READY TO BATTLE…” Could they make it any more like a prize fight? The combatants enter the arena one by one. And then… presentation of the colors? The national anthem?… I know our institutions are teetering, and I am Canadian, after all, but really, is this wallow of patriotism really necessary? And then, full juices flowing we’re ready for… a quick cut to a commercial break. Talk about crappy alienating television. Ugh. It’s a full 13 minutes in and the candidates have yet to speak.

Ten candidates is a lot. Hard to spend much time with any of them to develop ideas. That said, I liked this format more than the first Miami debates. Moderators addressing one candidate but including a second and letting them talk to one another was better than doing one at a time then descending to free-for-all. The candidates were also slightly better behaved in not talking over one another.

It was set up as a battle between moderates and the progressive side with Marrianne What’s-Her-Name playing the outsider, almost like one of us on the outside, chiding the Dem party for not doing things. She’s still too woo-woo, but she got some good shots in. Obvious three or four of them won’t still be around by the September debate. Gone by then: Bullock (his aw-shucks folksiness didn’t play well), Ryan (he blended into the wallpaper), Delaney (who got beat up in the health care portion), and probably Hickenlooper (Gee I had a good time!). That takes a bite out of the moderate clutter.

While the health care portion at least took on the central policy issue: scrap the current system and start over or build on what we have and give people options, the climate portion was disappointing. The fact that it was relegated to the deep middle part of the evening and that there weren’t really hard questions belied the urgency the issue is due.

Takeaways: Nobody really moved the needle. No disasters or gaffes, no big victories. No real surprises. And here’s CNN at the end, hyping the “clash of ideas,” and congratulating candidates on “scoring some good hits” and trying to shape it as a prize fight. Pretty tiresome.

Postscript: Favorite moment is Anderson Cooper interviewing Williamson afterwards and she’s explaining that politics has fallen behind the rest of American society. He’s clearly flummoxed, fascinated, charmed. He says her name was most-searched online tonight during the debate. No kidding. She got off a couple of sidewinder speeches calling for the need for love and a call for a moral revolution. She’s not like the others and she plays a counterpoint to the politicians on the stage and to the journalists.

Douglas McLennanhttps://www.artsjournal.com
Doug is a longtime arts journalist, and the founder and editor of ArtsJournal.com, he's frequent keynoter on arts and digital issues, and works with a number of arts organizations nationally.
Previous article
A Thoughtful Defense Of Sawant as City Council Sparkplug
Next article
Populists Versus Pragmatists: Warren Wins