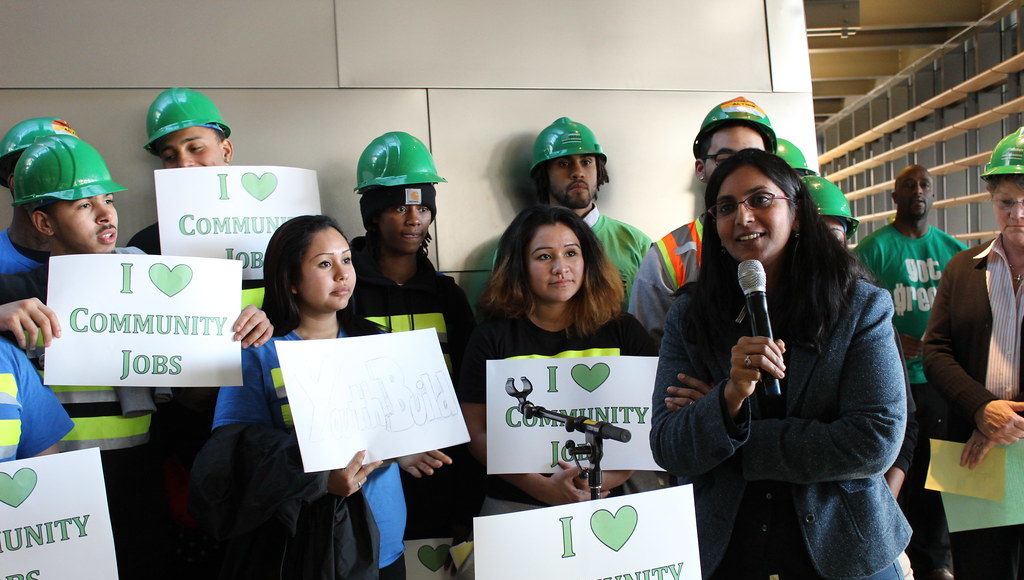 A Thoughtful Defense Of Sawant as City Council Sparkplug

Several Post Alley writers have provided thoughtful but falsely alarming predictions of a disaster in the upcoming Seattle City Council elections if District 3 Councilmember Kshama Sawant is reelected. These writers imply the same dire fate should other councilmembers espousing progressive legislation similar to hers remain in office or get elected.

I disagree. I do not share their trepidation because I believe a number of their assumptions are tenuous, if not wrong. And consequently, their conclusions are also dubious.

Dick Lilly writes that “Nothing changes if Kshama Sawant is re-elected.” And “Her deliberate high profile makes her the public face of the council.” But the council does not have a singular public face. Tim Burgess, Sally Bagshaw, and Tom Rasmussen were all on the council with Sawant. She was not their public face. I do not believe any of them were accused of being swayed by Sawant.

It has also been written that the “Reaction she sparks drives negative attitudes toward the whole group.” I don’t think that is true, nor that this factor is significant. Over the past two decades there is a steady percentage of voters who are dissatisfied with the council regardless of its composition. However, that level of dissatisfaction is also true for our various mayors, given their high turnover; in my years on the council, I served under four different mayors.

Another charge: Sawant’s invariable touchstone in answering questions at candidate appearances is to create a mass workers movement. So what? Some candidates answer as consistently to questions that their solution is to create a “free market,” although one doesn’t hear that from successful candidates in Seattle. In a democracy, candidates are free to champion a set of beliefs they advocate to promote the common good. We may differ on which ones will, but the voters will decide that. Personally, I think realistic and
useful answers to our most pressing problems are always more complex than
single a word or a slogan can provide.

Labeling which councilmembers are responsible “moderates” or irresponsible “radicals” seems simplistic and also skewed toward a conservative philosophy. For instance, Councilmember Teresa Mosqueda is described as strongly union, which makes her a leftist rather than a moderate. Her domestic workers legislation requires that they receive a minimum wage, rest and meal breaks, privacy protections and the opportunity to form collective bargaining units. These are legitimate democratic rights, not just a leftist cause.

And what does it mean that there is a “group to the left that aggressively looks to business taxes for revenue”? The “head tax” would have added one penny an hour to an employee’s paycheck. Is that being anti-business? Keep in mind that it would have applied to only the largest 3 percent of businesses in Seattle.

I urge readers to look at the Seattle Times Sunday, July 21 edition, which compares the annual salary for regional CEOs in comparison to the median wage for their employees. Nationally, the differences between CEO’s and their average wage earners is now twice as big in the US than in any other major industrial democracy. Is this something we want to continue? Is it too aggressive to minutely lower that ratio by having some businesses contribute more to the public’s greater welfare?

On the other hand, criticisms of Sawant’s organizing style are fair. At times these tactics divide, not unite, people. They can disrupt a public space (such as council chambers) designated to allow all to be heard not just those that speak the loudest. However, she has raised important issues such as rent control and pursued them aggressively, drawing the attention of the public and other councilmembers to them. I see her as a sparkplug, not necessarily hitting the right cylinders all the time, but one who has prompted the wheels of government to start turning.

Sawant’s faults are real, as is evident by the rise of challengers to her reelection this Fall.
But it’s unfair to make her a scapegoat. I see the major problem that Sawant critics are struggling with is how to stop Sawant from influencing the other councilmembers. The crude answer is to try to remove her from the council. A better solution is for those councilmembers who disagree with her strategies or her positions on issues to make their voices heard.

I have found all councilmembers to be smart people. To blame Sawant for their votes is misleading. They are not putty in anyone’s hands. They have the ability to explain their differences with Sawant or any other councilmember. That is the legislative process, and it will continue no matter who is elected.

Nick Licata
Nick Licata, was a 5 term Seattle City Councilmember, named progressive municipal official of the year by The Nation, and is founding board chair of Local Progress, a national network of 1,000 progressive municipal officials. Author of Becoming a Citizen Activist. http://www.becomingacitizenactivist.org/changemakers/ Subscribe to Licata’s newsletter Urban Politics http://www.becomingacitizenactivist.org/
Previous article
Too Far Left? Democrats Risk Losing Non-White Voters
Next article
“No Matter What You Say, Republicans Are Going To Call You A Socialist.” So What Are You Fighting About?