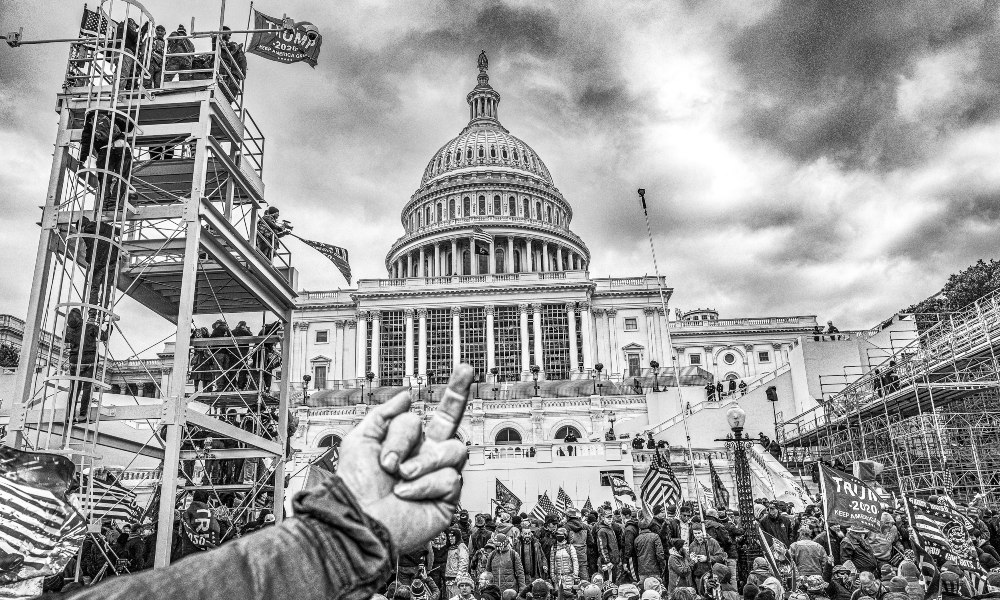 From Bernie Sanders to Immigrant Superheroes to January 6th, Seattle Photographer Nate Gowdy Chronicles the Intimate and the Dangerous of American Politics

Editor’s Note: this piece originally appeared in the September issue of PublicDisplay.Art, One Reel’s quarterly tabloid publication showcasing local artists, and is reproduced here with permission.

It only took about 10 minutes after photographer Nate Gowdy arrived in the vicinity of the U.S. Capitol on Jan. 6th, 2021 for him to get attacked for the first time. As he was approaching the Ellipse to attend Trump’s “Save America” rally, intent on capturing, with his Leica Q, both the wild spectacle and the virulent swirl of human emotion that powered that fraught day, Gowdy came across a group of several hundred Proud Boys and began walking alongside them, shooting photographs.

It didn’t take long before one of them, a man wearing a Trump 2020 beanie, his face covered by dark sunglasses and a raised bandana, broke from the crowd and lunged at Nate. Caught off guard by the violent intensity of the man’s rage and hatred, he backpedaled away, shouting out that he was press, “with Rolling Stone.” Hearing this, the Proud Boys jeered as he retreated, mocking him as “Antifa!” and “Fake News!”

The time was exactly 10:52 am and 42 seconds. We know this because Gowdy snapped a photo of the Proud Boy coming at him, an image reprinted on page 18 of his remarkable collection of stark, oddly beautiful, deeply frightening photographs of that now infamous day. Gowdy’s book, Insurrection, is a terrifyingly intimate, darkly mesmerizing chronicle of high contrast black and white images capturing key moments of the assault on the Capitol Building. Insurrection is as much art as it is photojournalism – Gowdy preferred description of himself is as a “fine art documentary photographer” – and, as it turns out, it is unique, the only semi-comprehensive, chronological photographic collection of the events of January 6.

It wasn’t the only time that Gowdy would run into trouble that day. Unlike the news photogs insulated behind body armor, helmets and googles, Gowdy entered the fray trying to blend in, distinguishable as an observer only, perhaps, by the camera in his hand. This offered some modicum of protection, some ability to blend in, to go unnoticed in the chaos of the mob. “People weren’t 100 percent sure I wasn’t one of them,” he tells me as he recounts the story of that day in his modest photography studio in a decommissioned INS building on the edge of the International District.

But not always. At 12:56:58 Gowdy is standing on a three-foot balustrade looking over the crowd when a man turns toward him, points a black gloved hand, yells “fuck you” and then violently shoves him off his perch. This too is a moment captured on film, a photo in the book. By then, the enormity of what was taking place had begun to dawn on him. “There was a huge sense of camaraderie among this crowd, a toxic camaraderie… I knew going in it would be stupid. I had no idea it would be deadly stupid,” he says.

Amidst the remarkable crowd scenes – really, mob scenes – what most stands out in Gowdy’s January 6th photos are the faces of the participants, captured close up, in medias res. Those faces show an astonishing range of emotion: mostly anger and menace and hated, but also pain, celebration, joy. One of the first photos in the collection is of a group of MAGA supporters walking towards the Ellipse. It depicts a father, his young daughter riding on his shoulders. To his right is a group of young men, striding forward purposefully. In the center of the frame, the Capitol building in background behind his left shoulder, one of the young men is leaping high into the air, his arm stretched upwards, his finger pointing to the sky. His sense of excitement, of anticipation, of crackling exuberance is striking.

That Gowdy was there that day, to witness one of the ugliest political moments in American history, was not a surprise. Politics – presidential campaigns, the MAGA movement – has been a personal obsession ever since Gowdy was in high school, riveted to his television watching the turmoil of the 2000 Florida recount. “That’s what drew me into politics,” he recalls. In 2011 he started shooting photographs for Seattle Gay News, earning $200 a week as he covered hundreds of community events, including the 2012 marriage equality campaign.

That work was meaningful – Gowdy’s longest running gig is as the official photographer of the Seattle Pride parade – but Nate had a bigger itch to scratch. In 2015 he began attending and shooting presidential campaign events, almost all on his own dime. His style, of producing beautiful, emotionally resonant images of politicians and ordinary people engaging in political action, took shape.

Over the last seven years he’s shot 340 events on the campaign trail in 26 states. 99 percent of those events, he estimates, were “self-assigned and self-funded.” He remembers week-long trips in 2015 and 2016 to snowy Iowa and New Hampshire, trailing the candidates, sleeping in his rental car. He first shot a Trump rally in 2015, thinking, as most did, that he was capturing a bizarre blip in American politics. By now he’s attended and photographed somewhere between 30 and 40 Trump appearances.

In August 2015 a Bernie Sanders speech in Seattle was shut down by Black Lives Matter protestors, and Gowdy had posted his photos of the event – and of a Sanders fundraiser at the Comet Tavern and stadium rally after that – on a blog. That eventually caught the attention of Time Magazine editors. They reached out, and eventually offered him a press credential so he was better able to shoot the then-surging Sanders campaign. It was “a tremendous confidence boost,” Gowdy recalls. To actually have an official journalistic credential was “a golden ticket.”

Nate trailed Bernie on a California campaign tour, and dead beat after a couple days of sleeping fitfully in his car, he got a shot of the candidate from below and behind, in a rumpled, dark suit, his arm raised toward the sky as he addressed a crowd. Because he was so tired Gowdy accidently overexposed the shot, which “blew out the sky,” leaving it completely white and featureless, creating a stark contrast with Sanders’ figure. Time loved it, and put it on the cover, to illustrate a June 2016 story titled, “How Far Will Bernie Go?”

After that, paid assignments followed: CNN, Die Zeit, Courrier International (a Paris publication), and then later Rolling Stone (25 of Gowdy’s Jan. 6 photos appeared in a photo essay on the magazine’s website), and Mother Jones. As of August 2022, Gowdy is represented by the Monroe Gallery of Photography in Santa Fe, New Mexico, which sells the work some of the most famous photojournalists in the country.

But Gowdy keeps going to major political events, whether he’s getting paid or not. It’s not a job, it’s a personal passion, a compulsion to witness – and to capture – the good, the bad, and the beautiful ugly of American politics. “It’s neat to be in the front row of these things. It’s history,” he says.

Separate from Insurrection, Gowdy has another major project underway: the American Superhero Project. In 2019, Gowdy, his friend Vishabjit Singh, and several others were brainstorming how they could expand the idea of what an American looks like to people on the margins, the forgotten, the outsiders, the invisible. How could they visually represent our intersectional identities as Americans? Eventually they came up with an idea: what if people who were othered could stand beside you in a superhero costume?

So Gowdy maxed out his credit card buying Captain America paraphernalia, and put the word out to activist friends to bring them subjects. Eventually 40 people, many immigrants, turned out for a day-long shoot where they were photographed dressed up in the red, white and blue outfits. The shoot took place in Gowdy’s studio, the same building where most of the immigrant participants had their naturalization ceremonies.

Gowdy knew from the moment they started the shoot that it was going to be a success. “It was amazing, the energy was wonderful,” he says. “People felt heard.” Soon the media picked up on it, and then the Smithsonian emailed, saying they were interested in acquiring the work.

Since then, the project has expanded. Seattle Rep. Pramila Jayapal posed, as did seven other members Congress, including most of The Squad. Annise Parker, the first openly gay former mayor of a major city (Houston), posed for it, as did Deb Holland, now the first Native American Secretary of the Interior. “Basically, we’re reclaiming the red, white and blue when a lot of people are averse to it,” Gowdy says, adding that a Superhero Project book is in the planning stages, as is a collection of Bernie Sanders photos.

But Gowdy’s main fixation these days is with the rise of the Trumpist right. When we met in early August, Gowdy was about to leave for Dallas, to photograph the Conservative Political Action Conference, which bills itself as the “largest and most influential gathering of conservatives in the world.”

Asked why, given his strongly left personal politics, he spends so much time covering Trump events, Gowdy says that what drives his interest in the MAGA base has shifted sharply over time. When he began, he was seeking common ground. “Sharing our stories is the bridge to connection,” he says. “I take pictures of people I disagree with that people on my side could relate with.”

But as he repeatedly turned his lens towards the faces of MAGA extremism, he increasingly felt those people were “foreign to me,” irredeemable, even as he says he continues to strive to capture them authentically, to do artistic justice to the essential nature of their passion. He shakes his head. “They’re gone.” What began as an exercise in trying to understand the other has become more the ringing of an alarm bell. That’s why he was there on January 6, that’s why he went to CPAC, that’s why he goes to all those MAGA rallies. He wants his photographs to warn people of what is happening, where things are going, how bad it could get.

“Things are really scary,” Gowdy says. “We are up against something that’s terrifying.”

Sandeep Kaushik
Sandeep Kaushik is a political and public affairs consultant in Seattle. In a previous life, he was a staff writer and political columnist at the Stranger, and did a stint as a Washington State correspondent for Time Magazine and for the Boston Globe, back in the olden days when such positions still existed.
Previous article
Culture Clash: Bainbridge Pickleballers and Tennis Players go to Court
Next article
Unruly Planet: How to Not Let the Climate Crisis Totally Depress You