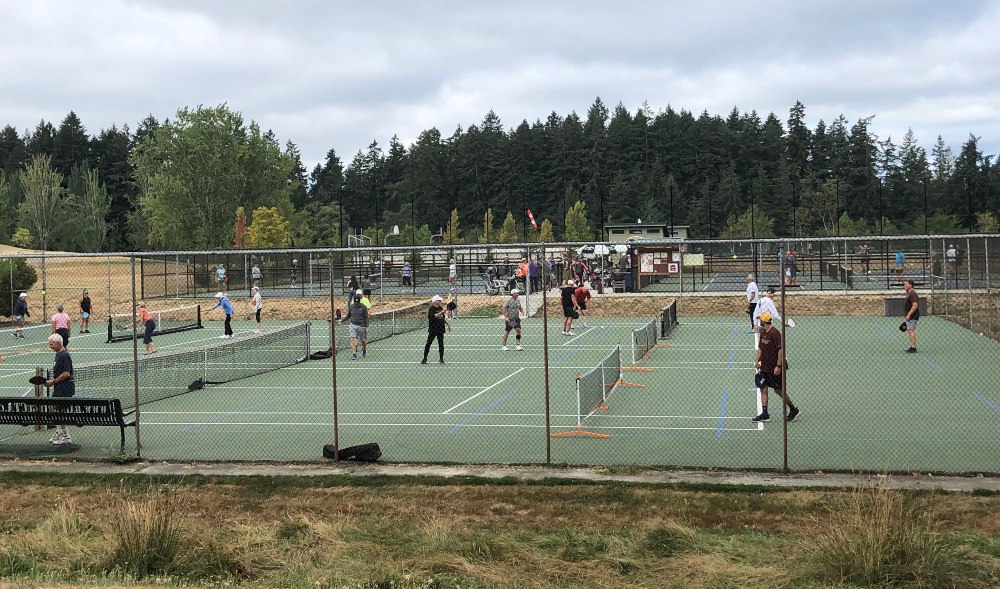 Passions are flaring. Common ground is proving difficult to find. People are fiercely divided. That sounds like the state of our politics today. But increasingly it also appears to be how all kinds of conflicts are intensifying. To wit, pickleball and tennis.

I live on Bainbridge Island where we are quite proud of our landmark status as the birthplace of pickleball. Now the 50-year-old game also is the official sport of Washington state. Its popularity continues to grow and spread. Recently I read a novel that takes place in Florida and pickleball is repeatedly referenced, the way tennis might once have figured in a similar kind of novel.

And speaking of tennis, there’s the rub.

There are blocks of time in the morning when tennis players get priority use of those two courts. I’ve arrived to play tennis when a pickleball game might be under way. We ask the players politely if they could move after finishing their game, and they usually are quite amenable.

While we might be playing doubles on those two courts — with a total of eight players — there often are several dozen pickleball players rotating on and off their complex of courts. With so many people waiting to play, it’s easy to understand why some cast a covetous glance at the two tennis courts.

This isn’t just an issue here on Bainbridge, ground zero for pickleball. The sport’s rocketing popularity is leading to court access conflicts in Seattle and many other places where paddle wielders are demanding more courts for play. Kurt Streeter, a former elite Seattle tennis player now writing for the New York Times, returned home to explore the sport conflict by trying pickleball and concluded: “I’m not giving up tennis. No way. A good match is like a flowing waltz — and a much more demanding workout. But I’m ready to make some room for pickleball in my life. Just don’t tell my tennis friends.”

As Streeter found, both sports are great fun and often people enjoy picking up their paddle one day and their tennis racket the next. I’ve only tried pickleball once and want to do it again. But as we all learned in kindergarten, and more recently from Trump and his MAGA followers, not everyone likes to share and play nice.

Recently the move to get the island’s parks department to convert at least one of the Battle Point tennis courts to full time pickleball has picked up steam. And that’s what reminded me of the state of our national political climate. Was the starting point a balanced and courteous exploration of possible solutions? Was the goal to make sure that both tennis and pickleball players would feel heard and respected and have their needs met?

From what I’ve heard, the answer is no. Rumors started flying, someone did an unofficial census of court usage comparing the high number of pickleball players with the paltry number of tennis hitters and it brewed into a real « them v. us » atmosphere.

In this instance, most of the « them » and the « us » likely share similar political inclinations, and thankfully there haven’t been any Trumpish rumbles to the dispute, Bainbridge Island, after all, is reliably blue politically. It’s the instinct to be combative and divisive no matter where you are on the political spectrum that troubles me and has unfortunate echoes of national politics.

Tennis and pickleball are distinct sports, like other racket sports — squash, paddle ball, badminton et al. They each require a different kind of playing space and are organized differently.

For tennis, generally players commit ahead of time to play on a given day at a scheduled time. For doubles, that is four people usually for 90 minutes. You don’t play by having 30 people show up and rotating them in and out. Part of the skill and challenge and fun is to play out a full set, getting the measure of the other team and adjusting your strategy.

Part of pickleball’s allure is that players can show up en masse at a set time and then rotate fairly rapidly on and off the court, playing with a constant flux of people. From what I’ve observed, there is a greater mix of ages and gender on the pickleball courts at any given time than you usually find on the adjacent tennis courts.

Again, this is because they are distinct sports that are played differently.

Both sports deserve courts for regular play. The solution on Bainbridge should be to add more pickleball courts, not take away tennis courts. In the interim, if courts need to be shared, a reasonable schedule could be negotiated to assure adequate playing time for both sports.

Given everything else going on in our distraught universe these days (the endless pandemic, racism, political dystopia, global warming, gun violence and so much more), perhaps you wonder how civic minded intelligent caring people can get so wound up about racket sports.

I’ve concluded that this dispute might be a good thing. Perhaps it is a necessary, albeit rather parochial outlet, for feeling so helpless about the big issues of our times. Maybe if we can come together and find a solution for both pickleball and tennis players, we can feel that we have some agency. Maybe if we do it amicably and courteously, we will remind ourselves and others of those bygone years where political differences also could (usually) be discussed respectfully and where we actually took the time to listen to each other.

And then, in the court of public opinion, perhaps how we solve the Bainbridge tennis v. pickleball battle will be a template for our larger political discourse.

Linda Kramer Jenning
Linda Kramer Jenning is an independent journalist who moved to Bainbridge Island after several decades reporting from Washington, D.C. She taught journalism at Georgetown University and is former Washington editor of Glamour.
Previous article
How Small Town Life Breaks Down the Fear of “Others”
Next article
Open Wound: January 6 in Stark Images