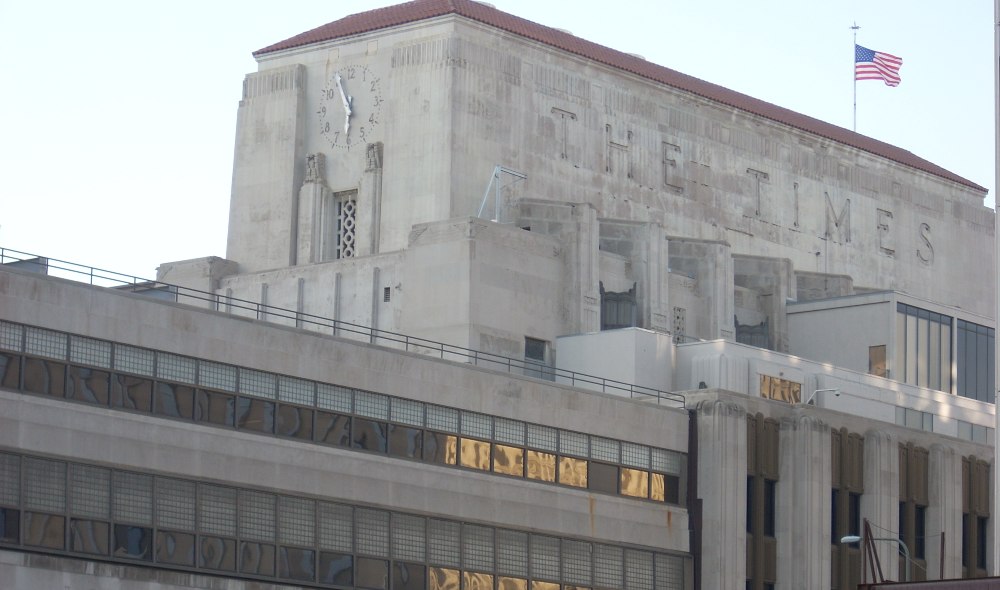 The LA Times: How to Dismantle a Great Civic Institution

“Bad City: Peril and Power in the City of Angels,” is a parable for the decline of vital institutions, a deep dive into corruption in Los Angeles where the quest for power overrides principle and undermines faith in elections, the justice system, and the job of a free press to call wrongdoers to account.

The book by my former Los Angeles Times colleague Paul Pringle, a Pulitzer Prize-winning investigative reporter who has made a career of exposing corruption, is also personally devastating. It is a painful recounting of ethical lapses at the newspaper I loved and where I wrote from the frontlines of history for 26 years.

Top editors at the Times in the final years of Tribune Company ownership for months quashed the story of a University of Southern California medical school dean partying with troubled young addicts and supplying them drugs. Pringle brings into focus the complicity of USC administrators in shielding Carmen Puliafito, dean of USC’s Keck School of Medicine, from a public spotlight on his criminal behavior.

Pringle’s chronicle of institutional rot begins with a tip in March 2016 about a young woman’s drug overdose in the Pasadena hotel room of Puliafito. It proceeds with a coverup by the Pasadena Police Department that responded to the 911 call, found drugs in the room, and transported the unconscious victim to a hospital. No police report was filed.

Hotel Constance staff who might have witnessed the paramedics’ rescue, the drug confiscation, the prominent man shacked up with a woman 40 years his junior, were muzzled under the pretext of respecting guests’ privacy. Dogged investigation led Pringle to USC president Max Nikias, who stonewalled the reporter’s attempts to interview Puliafito. Instead of answering questions about the dean’s criminal behavior, Nikias returned Pringle’s hand-delivered inquiries, unopened, to the office of Times’ editor Davan Maharaj.

In chapters about “Hitting a Wall” and “Searching for Sarah” — the overdose victim whose name appeared nowhere in the deep-sixed public records, Pringle observes that stories casting USC in a bad light “drew extraordinary scrutiny and were assigned little urgency” under Maharaj and Managing Editor Marc Duvoisin.

The editors held up publishing the first submission for months, claiming the sourcing was inadequate. The battle between Pringle and the editors over proposed deletions delayed publication months more before the they killed the story. Pringle and four other reporters, including two young USC alums, filed an updated version a year after the initial draft that endured further procrastination.

The book also chronicles USC’s negligence in acting on complaints over 27 years about campus health center gynecologist George Tyndall, accused of inappropriate behavior ranging from “creepy” conversation to sexual assaults reported to the rape crisis center. Tyndall was paid to resign quietly in 2017. Only after the Times report by Pringle and colleagues Harriet Ryan and Matt Hamilton in 2018 did the Los Angeles Police Department undertake the largest sexual abuse investigation in its history, resulting in 35 felony charges. Tyndall has pled not guilty and is awaiting trial.

Attorneys for the victims in March announced a settlement of $852 million, the largest ever against a university. Pringle, Ryan and Hamilton were awarded the Pulitzer Prize in investigative reporting in 2019 for their exposé that suffered no similar editing delays. Maharaj and Duvoisin had been fired shortly after the Puliafito story appeared in July 2017.

“Bad City” also covers the Varsity Blues scandal of Hollywood celebrities and other prominent parents bribing college admissions officers to get their unqualified kids into Ivy League schools. USC was a popular landing pad thanks to Athletics Director Donna Heinel and LA-area admissions advisor Rick Singer feeding her lucrative but undeserved placements. Pringle had already amassed a resume of investigations into USC scandals when he got tipped to Sarah Warren’s overdose. He and two other Times colleagues collaborated on stories about millions in bribes and kickbacks to managers of the Coliseum stadium where Trojan football games were played.

“That scandal showed that corruption of an impressive temerity was alive and well in the City of Angels – that a nonfiction take on L.A. noir was not a thing of the past,” Pringle writes of the exposé that led to six indictments.

“Bad City” takes the reader inside the Times newsroom at a time of plummeting ad revenue and cancelled subscriptions. With social media and online aggregation providing free content, news consumers turned to their laptops and mobile devices. The Times’ fall from grace in the era covered in Pringle’s book upended half a century of the newspaper’s rise from an anti-union, civic booster promoting investments that enriched three generations of publishers. It wasn’t until 1960, when Otis Chandler, scion of the family who had owned the Times for 118 years, became publisher and elevated the newspaper to national prominence. That era ended in 2000, when heirs of the Chandler fortune sold out to Tribune.

After 40-plus years as a journalist, I found the revelations about the LA Times editors I knew well and once respected most disturbing. Maharaj in his days as a business editor handled many of my stories about trade and economics, especially during the five years I spent as Caribbean correspondent. Maharaj hails from Trinidad & Tobago. The consensus among Times journalists during his six-year tenure as editor was that he changed as he was promoted to positions that swelled his already substantial ego and put him in the company of LA’s movers and shakers.

Duvoisin was a respected editor with a reputation for caution. Monthslong editing from submission to publication was not unusual. Because most of my reporting was handled by Foreign Desk editors, I had little interaction with him outside of visits to the mothership on “home leaves.” Maharaj and Duvoisin have denied holding back Pringle’s Puliafito exposé to appease USC.

“I and the other honorable senior editors who worked with me would never let any person or entity, including USC, dictate any aspect of our coverage,” Maharaj said in an interview with the Times.

“There were no hidden motives — and no “corruption” whatsoever – only our deep conviction that there is a right way to do journalism, and that way is not reckless, vindictive, or triumphal,” Duvoisin responded on his Facebook page. Pringle relishes his triumphs over liars and scoundrels. In his first sentence of “Bad City,” when he describes learning of the allegations against the medical dean, he calls the scandal “too good to be true.” Pride is probably the more relevant description.

My view of the chasm between Pringle’s portrayal of the long standoff and the editors’ contentions that the story wasn’t ready for publication for 16 months is due to personality conflicts. Pringle is driven, relentless and gruff, with the rumpled demeanor of a police detective. Duvoisin is soft-spoken and rarely stood out of Maharaj’s shadow. Pringle relates many a showdown with the managing editor that escalated to angry confrontations.

“Bad City” lays out a convincing argument that the editors’ concerns about the Puliafito story were more excuses than explanations. Pringle’s first draft was slow-walked through months of editing and finally killed. Maharaj and Duvoisin frittered away more than a year in disputes over Pringle’s aggressive pursuit of the dean and the USC president, an effort to hear all sides usually applauded by editors.

Pringle reports at the end of his book that Maharaj received a $2.5 million payout after he was fired to keep secret an anti-Semitic slight against LA philanthropist Eli Broad by Michael Ferro, then chief executive of Tribune successor company tronc. Duvoisin has found new life in journalism as editor of the San Antonio Express-News. Maharaj isn’t known to have returned to media employment. High-profile LA lawyer Mark Geragos negotiated a settlement between USC and Sarah Warren’s family awarding them a $1.5 million payment, reduced by $600,000 for attorneys’ fees. The settlement prohibits the Warrens from further legal challenges or releasing photos they have of the dean smoking meth.

The Times was bought in 2018 by billionaire physician Patrick Soon-Shiong and his wife Michele B. Chan. The newsroom formed the Times’ first newspaper guild in the paper’s 140-year history. After an interim editing stint by former Wall Street Journal and Newsweek editor Norman Pearlstine (which also involved a conflict-of-interest issue) the Times is now in the hands of Executive Editor Kevin Merida, former Washington Post managing editor and head of ESPN’s The Undefeated.

My friends who toughed out the years around the “Bad City” scandals report a more hopeful atmosphere at the paper and its new owners’ commitment to the core principles of journalism. I thought reading “Bad City” would leave me feeling vindicated for having quit along with 100 other colleagues in the mass exodus, AKA buyout of veterans, at the end of 2015. I don’t feel vindicated, I feel incredibly sad. When I was hired in early 1990, the Times had 34 correspondents. The number now is in the low single digits. The job of informing readers of the dangers and challenges outside our borders is an ever-shrinking priority in the media world.

Carol J Williams
Carol J. Williams is a retired foreign correspondent with 30 years' reporting abroad for the Los Angeles Times and Associated Press. She has reported from more than 80 countries, with a focus on USSR/Russia and Eastern Europe.
Previous article
Democracy’s Peril: The Top Issue (and yet…)
Next article
Now We Know Who Spent Big to Try to Save Herrera Beutler