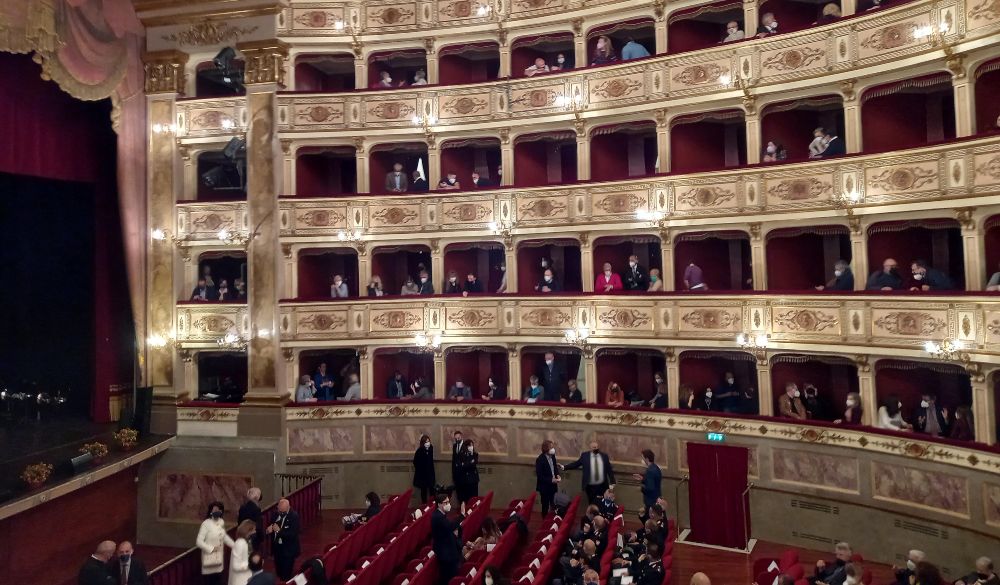 You never quite appreciate something until you don’t have it any longer. In late 2005, I had an occasion to be in New Orleans a few months after Hurricane Katrina wreaked havoc on that city, rendering entire neighborhoods unlivable. Residents were scattered across the continent in homes of relatives and friends or in public shelters.

When I walked the streets of the French Quarter after my business meetings, the feeling was eerie. There were none of the usual crowds surging along Bourbon Street. The place was virtually empty. Indeed, I could see no one else for blocks in any direction. Finally, it struck me what was missing: music. A city normally filled with music at every turn was dead silent. That creeped me out.

This vivid memory flooded back recently as we began to emerge from the pandemic restrictions that have altered lives in Italy and around the globe. One of the supreme pleasures of living in Italy — where my wife and I have been for five years — is being immersed in a long, deep culture of music. Until the COVID-19 pandemic changed everything, we enjoyed an embarrassment of musical riches, from classical to popular and everything in between. The country so values music as an art form that most concerts were free. Big posters at every turn announced upcoming events.

Even the tiny opera house in our village of Santa Vittoria in Matenano hosted monthly, sometimes weekly, concerts. Sometimes it was the town band who played, with members of all ages filling the stage. Sometimes it was visiting groups. One month a huge group came from Poland, complete with marching majorettes who tossed their batons high up toward the ceiling of the auditorium, with its four tiers of box seating. One summer a dozen Japanese classical musicians camped out in a palazzo on the main street. When they weren’t preforming in various public venues, one could enjoy them rehearsing during the day. Sitting in a café, with a cappuccino and listening to a concerto reverberate off the stone walls lining the street is a supremely romantic experience.

COVID wiped all of that out almost overnight, in March 2020. When the town patriarch — the village pharmacist — died two weeks after contracting the disease, everyone in the village signed up for vaccinations and masked up. The precautions lasted until just this week, when all restrictions were lifted, 26 months after Patrizio’s shocking death. We and our neighbors became part of the 90% of the population that was thoroughly vaccinated. Consequently, the death rate in Italy has been a fraction of that in the United States.

But we gave up music, at least the kind enjoyed as an audience, as indoor venues were off limits. Theaters of all types and sizes were shuttered. On the wall outside ours, a big poster still proclaims the schedule of concerts planned for 2020. Only the first one was ever held, the poster serving as a mute reminder of how quickly the world can change.

So, it was with great relief that, on a recent Sunday evening, the music returned. A neighbor asked me to join him and his friends and attend a big concert in a nearby larger town, Fermo. Off we went, seven adults in a minivan, like excited schoolkids on a field trip. The drive raced along serpentine rural roads with everyone swaying and clasping a handle.

I had not been to the more than 200-year-old Teatro dell’Aquila before, so I had no expectations of the concert hall. Nonetheless, I was enchanted by the classical design and lavish ornamentation inside. An immense hall in traditional semicircular shape faced a deep stage framed with heavy curtains. Five levels of box seats lined the curving wall; rows of plush velvet-covered seats filled the floor. My friend and I shared an elevated private box, seated on little vintage chairs, behind a railing over the room below. We exchanged waves with people we knew across the vast interior space.

The performing group for the evening was the official band of the State Police — also known as the carabinieri. Police officials in fancy dress uniforms with ceremonial swords milled about on the main floor as we waited for the musicians to appear on stage. Sixty men and women, also in formal dress uniforms and caps, soon filled seats arranged around the raised platform of the conductor — aka maestro. He arrived carrying a stack of oversized sheet music as the band members rose and stood at attention, military style.

The band was large enough and had such volume that it sounded much like an orchestra, though without a string section. The shape of the hall amplified the sound with an almost cinematic effect. The non-stop two-hour show included pieces from operas, film scores with several well-known songs by the late Ennio Morricone — Italy’s lionized contemporary conductor/composer.

One soloist sang a plaintive rendition of John Lennon’s “Imagine” — a chilling commentary on the war raging 2,000 kilometers to the north in Ukraine (roughly the same distance as from Seattle to San Diego). But the refreshing thing was that there was no “pandemic theme.”  It was nice to get away from all that and just enjoy popular and classic songs. It felt good.

Both soloists belted out songs with such passionate gravitas that, at times, the big hall felt like an intimate nightclub. At the end of the evening, the audience stood and sang the Italian national anthem, “Il Canto degli Italiani,” as the conductor, with a wide ribbon diagonally across his chest, gave a sharp military salute to the audience.

I was completely mesmerized throughout the concert.

An interesting custom of Italian musical performances is that between pieces a narrator adds commentary about the upcoming selection. In this case, that role was filled by an elegantly dressed woman who also introduced dignitaries in attendance. She concluded the evening by giving bouquets of flowers to the soloists and the conductor. I am always taken by the combination of formality and enthusiasm by Italian audiences who yell “Bravi! Bravi! Bravi!” at the end of each piece.

So, the music is back. Audiences are eagerly returning. And I, for one, am delighted.

Mark Hinshaw
Mark Hinshaw is a retired architect and city planner who lived in Seattle for more than 40 years. For 12 years he had a regular column on architecture for The Seattle Times and later was a frequent contributor to Crosscut. He now lives in a small hill town in Italy.
Previous article
Beyond Roe: Looking to the States
Next article
Verdict on Trump’s Primary Influence: Idaho the Outlier?