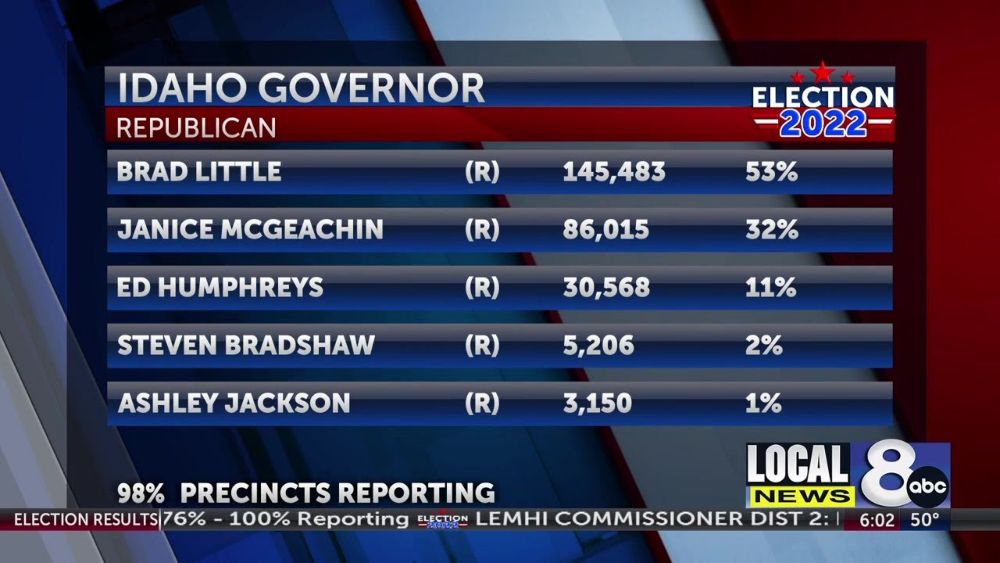 Ex-President Donald Trump displayed his clout in Tuesday’s Republican primaries but saw his role as political kingmaker slip in Idaho, one of the nation’s most conservative states, where he took more than 60 percent of the vote in 2020.

Trump had endorsed McGeachin, who shared the dais with white supremacists at rallies, and sought to exercise gubernatorial powers when Little was out of state.  She issued an executive order that forbade any local government from imposing a mask mandate during the COVID-19 crisis.  Once home, Little rescinded what he called an “irresponsible, self-serving publicity stunt.”

Trump fared much better in other primaries across the country, possibly to the detriment of his party. Notably, a Trump-endorsed “Stop the Steal” advocate, State Sen. Doug Mastriano, won the Republican primary for governor of Pennsylvania. Mastriano recruited participants for the January 6, 2021, march on the U.S. Capitol and sought to replace Biden electors with a bogus slate pledged to Trump.  President Biden carried the Keystone State by an 80,000-vote margin.

Elections have consequences, no more than in Pennsylvania this year.  The Democrats have nominated for governor Attorney General Josh Shapiro. Shapiro is pro-choice and joined our AG Bob Ferguson in multiple successful lawsuits against Trump Administration policies.  Mastriano has pledged to sign legislation criminalizing abortion.  As governor, he would appoint Pennsylvania’s next secretary of state, a position that includes oversight of elections. (Shapiro has a fundraiser in Seattle next month.)

Heart surgeon and TV personality Mehmet Oz, backed by Trump, held a 2,500-vote lead over former hedge fund boss David McCormick for the Republicans’ Senate nomination.  The race turned into a contest of who could more slavishly endorse Trump’s agenda. Oz was, until recently, a New Jersey resident, which produced grumbles of dissatisfaction among Republican voters. Trump and his amen choir were raising familiar cries as the Oz-McCormick race hinged on counting of absentee ballots.  “Oz should declare victory,” Trump said in a statement. “It makes it much tougher for them to cheat with the ballots.”  Fox News pundit Sean Hannity, donor of airtime to Oz, declared: “I don’t trust people. And I’m not talking about Republican candidates. I’m talking about people who have the ballots.”

Pennsylvania’s populist Lt. Governor John Fetterman ran away with the Democratic Senate nomination, beating moderate U.S. Rep. Conor Lamb by a two-to-one margin.  Fetterman stands 6’8”, campaigns in shorts and a hoodie, is an outspoken supporter of Medicare-for-all. He had to send his wife to declare victory, having been sidelined Friday by a stroke.  Capturing the seat of Pennsylvania’s retiring Sen. Pat Toomey is considered vital to Democrats’ chances of retaining Senate control in this year’s mid-term election.

Trump won big and lost one race in North Carolina.  He endorsed what was an uphill Senate nomination bid by GOP Rep. Ted Budd, and backed it with a pre-election rally. Supported as well with heavy spending by the conservative Club for Growth (often nicknamed the ‘Club for Greed’), Budd overwhelmed former two-term North Carolina Gov. Pat McRory.  Republican Sen. Richard Burr is retiring. If the narrow Oz lead holds up, Trump will have put his imprimatur on Republican Senate nominees in Ohio, Pennsylvania, and North Carolina. Democrats will make the North Carolina Senate race competitive:  They have nominated state Supreme Court chief justice Cheri Beasley.

The Idaho political establishment is hardly progressive.  The state’s minimum wage is just $7.25 an hour. Gov. Little recently signed into law a Texas-style abortion law, limiting the surgical procedure to the first six weeks of pregnancy. But McGeachin proposed such measures as enlisting militia groups to assist local police.

The far right won one notable victory in the Gem State.  Ex-U.S. Rep. Raul Labrador ousted veteran state Attorney General Lawrence Wasden.  Wasden’s sin?  He refused to sign up Idaho to a Texas-sponsored lawsuit that tried to throw out electoral votes of Georgia, Pennsylvania, Arizona, and Nevada. The suit was dismissed by the U.S. Supreme Court.

Rep. Simpson is conservative but survived several sins in eyes of the radical right.  He voted for a 9/11-style commission to probe the January 6 insurrection at the U.S. Capitol. (The legislation passed in the House but was killed by Senate Republicans.) He has proposed a plan for breaching four salmon-killing dams on the lower Snake River.  He also championed creation of a Boulder-White Cloud Wilderness Area north of Sun Valley, one of Congress’ few conservation achievements in recent years.

Simpson is the sort of character getting rare in Congress.  He attends the annual meeting of the Idaho Conservation League.  The session was held one recent year at Redfish Lake in the magnificent Sawtooth Mountains.  The congressman was drinking beer with friends well into the night.  But he rose early the next morning to watch Sandhill cranes take off from the lake.