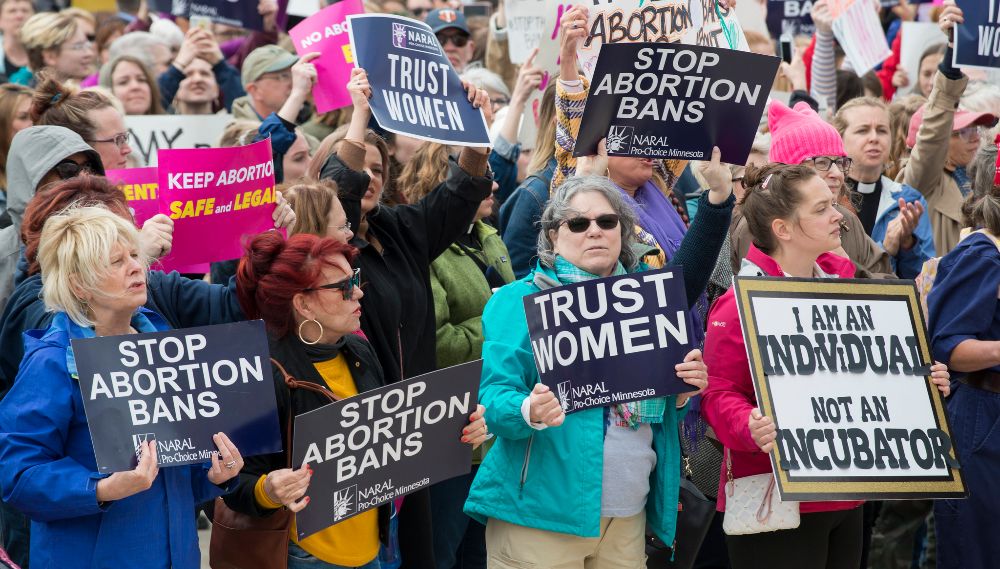 Beyond Roe: Looking to the States

On May 11, the U.S. Senate, for the second time this year, defeated Democrats’ legislation to protect abortion rights under federal law. The legislation went down 51-49 on the newest version of the law.

Progressive lawmakers have pushed the original bill since 2013, and it went further than codifying Roe v. Wade into federal law. It barred states from enacting restrictions. In February, it was previously defeated by the Senate 46-48, with Sen. Joe Manchin joining the Republicans against it, as he did again on the May 11 vote.

Schumer had warned the Republicans that their support of the Supreme Court Justices’ banning abortions would cost them at the polls. On the Senate floor, he said, “the elections this November will have consequences because the rights of 100 million women are now on the ballot.”

Democrats have reason to believe that they have a winning approach. Polls have shown that most voters don’t want to see the Supreme Court overturn the 1973 Roe v Wade ruling that protected abortion rights.

William Saletan, writing in The Bulwark, relies on polling to conclude that overturning Roe is terrible politics for Republicans. In February, a Yahoo News survey found that most voters supported “a constitutional right that women in all states should have some access to abortion,” while only about 30 percent agreed that “states should be able to outlaw” abortion. Polling for retaining Roe is surprisingly strong across the political spectrum. In a Fox News poll this month, May 3, most Democrats and Independents (both over 70 percent) voted to let it stand. Even 60 percent of Republicans held that opinion.

Another recent poll in May taken by Politico found that nearly 50 percent of voters want Congress to pass “a bill to establish federal abortion rights granted through Roe v. Wade, in case the Supreme Court overturns the ruling.” Only about 30 percent oppose overturning Roe.

Vice President Kamala Harris was spot-on when she told reporters that the Senate is “not where the majority of Americans are on this issue.” So how could the Republicans possibly think they can be re-elected if they vote against what most Americans want?

The answer is simple. Do the math. When a poll shows whatever most voters want, they often miss the most significant factor: converting that poll into Congressional votes by district or state. That’s because most of those favoring pro-choice are not evenly distributed across the country. Instead, they are concentrated in the most populist areas, states, or cities.

Repeatedly relying on the majority sentiment of the public on pro-abortion to be reflected in the Senate is foolish if not misleading. This expectation also allowed the progressive wing of the Democrats to believe that they could pass President Biden’s Build Back Better Plan. They rightfully pointed to widespread support for many elements within it. Therefore, they concluded Republicans would be forced to vote for it. However, there was no coordinated effort to organize support within swing Republican states.

Accordingly, Senate Democrats face a severe challenge in codifying Roe into federal law. The only open path is to bring onboard some Republicans, along with Sen. Manchin.

The only Republican Senators that may join the Democrats are from states where they could either lose to a Democrat or honestly believe in voting on principle and possibly losing their next primary election. Currently, that would be two women Republican Senators who are the least Trumpian and reflect traditional conservative horse-trading Republican politics.

Although Maine Republican Sen. Susan Collins has voted to stop the Democrats from moving forward, she is working with fellow Republican Alaska Sen. Lisa Murkowski to draft new legislation. According to Collins, it would put protections from the Roe v. Wade decision and the Planned Parenthood v. Casey decision into law. They have publicly supported pro-abortion rights but within a narrower framework than the Democrats have championed. Democratic leadership has been reluctant to engage, saying they hadn’t seen their legislation before voting on Blumenthal’s version. Even getting a majority vote might not happen if progressive Democrats see the final version as seriously flawed and peel off.

The last and most significant hurdle is to obtain the needed 60 votes in the Senate to avoid a filibuster. Those most opposed to any abortions or any restrictions on abortion could comprise just over 40 percent of the Senate and defeat any abortion legislation.

Progressive Democrats have repeatedly called for eliminating the filibuster, which has often been used to stop past progressive issues, like protecting civil rights. Donald Trump as president agreed with them about abandoning the filibuster. As a result, the party that can muster a bare majority in the Senate could pass sweeping legislation.

Of course, if the Republicans gain the majority in the Senate without a filibuster, which is likely, they could pass a national ban on abortions. Ironically, Democrats say eliminate the filibuster, but they use it more than the Republicans.

If Congress, in its current makeup, is unable to protect the right of women to have freedom over their choice in having a child, then the Democrats will have to focus on state politics. They must craft a message on abortion that will assist their candidates in select states to retain or expand the number of seats in that chamber.

That will be hard work, but it will be taking the advice of Justice Alito when he wrote in his opinion that abortion should be decided “by citizens trying to persuade one another and then voting.” The Senate, as now organized, does not represent a balanced representation of its citizens, so the decision must be returned directly to the citizens.

A version of this article first appeared in The Medium

Nick Licata
Nick Licata, was a 5 term Seattle City Councilmember, named progressive municipal official of the year by The Nation, and is founding board chair of Local Progress, a national network of 1,000 progressive municipal officials. Author of Becoming a Citizen Activist. http://www.becomingacitizenactivist.org/changemakers/ Subscribe to Licata’s newsletter Urban Politics http://www.becomingacitizenactivist.org/
Previous article
Neutrality has Outlived its Usefulness: Finland and Sweden Pick a Side
Next article
Italy — The Music Returns