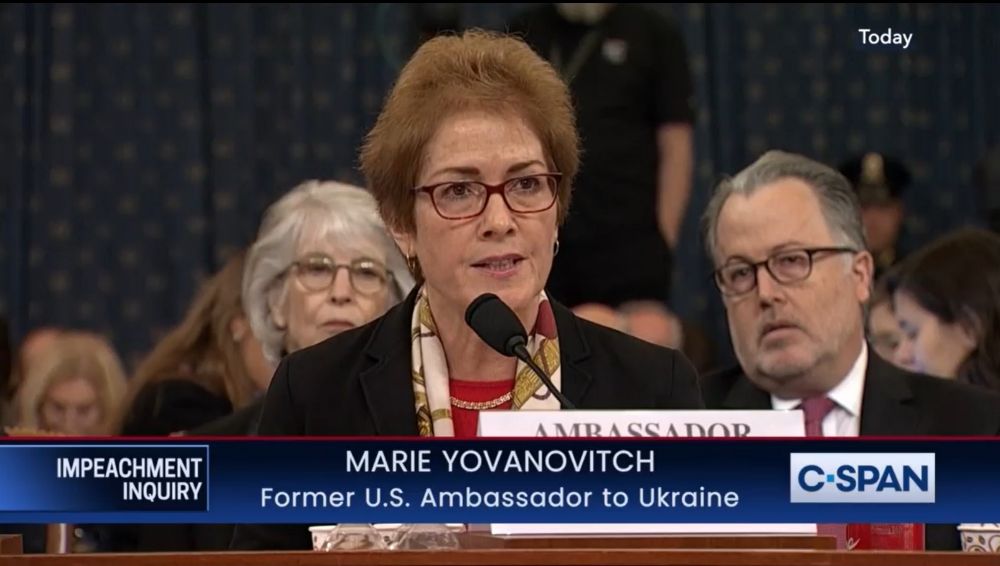 “Every crime needs a victim.”

Former U.S. Ambassador to Ukraine Marie Yovanovitch writes in her newly published memoir, more in reference to harm done to America’s security than to injury she suffered from high crimes and misdemeanors for which then-President Donald Trump was impeached.

In “Lessons from the Edge,” Yovanovitch chronicles her 33-year diplomatic career in some of the world’s most volatile places. Hers was a stellar record of public service that came to an end when Trump ordered her out of Kyiv in April 2019 to remove an obstacle to his coercing Ukrainian President Volodymyr Zelensky to dig up dirt on Joe Biden.

“When Trump used his office for his own benefit rather than the benefit of the American people, Americans were the very real victims,” she writes before noting she was “unfairly slandered and mistreated simply for trying to do her job.”

Yovanovitch — Masha, to all who know her — recounts her slow-motion realization that her anti-corruption work with Ukrainian officials was being undermined by the White House and Secretary of State Mike Pompeo. She blames that denial of reality on disbelief that any American leader would derail decades of U.S. foreign policy to foster democracy in the world.

Trump’s meeting with Russian President Vladimir Putin in Helsinki on July 16, 2018, sounded an alarm nine months before her unceremonious ouster.

“I watched the infamous Trump-Putin press conference at my Odesa hotel that evening while I pecked at room-service french fries. I quickly lost my appetite as I saw our president toady up to Putin and take the Russian’s word over that of our own intelligence agencies, which assessed that Russia had interfered in the 2016 U.S. presidential election. God only knows what Trump said in the two-hour one-on-one meeting with Putin, a meeting unusual not only for its length but because Trump did not brief U.S. officials on the discussion later.”

Trump’s submission to Putin in Helsinki signaled his retreat from NATO’s commitment to eventually admit Ukraine to the alliance, as well as reeling back U.S. support for the alliance.

In the months that followed, U.S. policy on Ukraine eroded. Escalating Russian aggression against its neighbor failed to spur condemnation or even acknowledgement from Trump’s State Department, an institution hollowed out under Pompeo and his predecessor, oil executive Rex Tillerson.

On Nov. 25, 2018, the Russian coast guard blocked three Ukrainian navy vessels in international waters. A flurry of calls between Yovanovitch, State Department officials and anxious Ukrainian government figures led to consensus that an administration statement condemning Russia’s provocative action was in order. A common practice, the call to express U.S. outrage crawled up the diplomatic hierarchy until it got vetoed by Pompeo on Trump’s orders.

Yovanovitch began getting warnings from Ukrainian officials that Trump’s personal lawyer, Rudy Giuliani, and two Soviet émigré American citizens, Lev Parnas and Igor Fruman, were putting out word that she was about to be removed as ambassador. She’d become a problem for the oligarchs and officials who stood to lose power and wealth if an anti-corruption bill passed that she championed on behalf of the U.S. government.

“While I’d seen plenty of whisper campaigns and smear efforts in my many years of working in the former Soviet Union, Americans had never been among the key players driving them. Perhaps that’s because anyone considering such an effort would never have gotten close enough to the seat of American power to have an impact. But as I was rapidly learning, where Trump’s administration was concerned, all bets were off.”

Rumors became fact when a conservative opinion writer named John Solomon, someone she’d never heard of, posted several articles on the website of The Hill, a publication focused on U.S. politics. The articles relied heavily on an interview with Yuriy Lutsenko, who was posturing as a reformer in a bid to take over the corruption fight as Ukraine’s general prosecutor.

“Masquerading as news reports and relying heavily on an interview with Lutsenko, Solomon’s postings advanced a number of conspiracy theories, all of which seemed aimed at showing that certain unscrupulous people in Ukraine had worked against Trump in 2016 and were continuing to do so in 2019. An entire set of Lutsenko’s charges focused on me.”

The unfounded allegations that she had bad-mouthed Trump were amplified by Fox News commentator Sean Hannity and retweeted by Trump. Yovanovitch notes that The Hill severed its relationship with Solomon months later and appended a lengthy editor’s note to his Ukraine columns calling into question Lutsenko’s credibility. “But by that point the damage had long been done.”

The smear campaign revved up. Donald Trump Jr, tweeted an article on alleged calls for her ouster, adding his own comment that “We need … less of these jokers as ambassadors.”

As a State Department veteran, she sought advice from long-time friends and colleagues and an explanation for why she was being targeted. Fellow diplomats at the Kyiv embassy proposed a joint message to Pompeo defending her and urging him to put out a statement to quell the right-wing media stories that she was disloyal, a show of support she appreciated but vetoed to keep her team from getting entangled in the web spun by Giuliani.

Yovanovitch appealed to Gordon Sondland, a businessman with no foreign policy experience who Trump appointed U.S. ambassador to the European Union after seven-figure donations to his campaign and inauguration. Sondland told her to “put out a tweet about how much you love the president…. Go big or go home.”

The ax fell on April 24, three days after Zelensky’s landslide election victory. She was hosting an event at her residence honoring a crusading journalist who’d been killed for exposing misdeeds by powerful people in the port city of Kherson. An assistant passed her a message that Washington needed to talk with her immediately on a secure line. The ambassador made the 20-minute drive to the embassy to receive the call in the high-security bubble.

The message at 1 a.m. from the Foreign Service personnel director was blunt: “I needed to come back to Washington. Immediately. In fact, she wanted me on a plane that day.” The director charged with recalling, a veteran Foreign Service office herself, told Yovanovitch she had no idea why this action was being taken.

Back in Washington in an audience with Deputy Secretary of State John Sullivan, she learned that even he was unaware, or claimed to be, why she was being removed from a position she had earned and professionally executed. His kind words she would be treated respectfully broke down the wall she’d built around her emotions.

“I had spent the past three months compartmentalizing, pretending that the baseless attacks didn’t really matter — that everyone would eventually see them for what they were, and everything would return to normal. But Sullivan was telling me that principle would not prevail. I was being quietly let go, with no statement of support other than inside that room, leaving the world to believe that the tweets and other slanders raging outside Sullivan’s office were true. The compartments collapsed, leaving only hurt and anger. And tears.”

The purgatory of waiting months to learn what assignment she would be given and whether the administration would stage an investigation to “prove” her misconduct weighed on her spirits. She sought psychological counseling and an attorney, the latter offered pro bono and welcomed by a diplomat who had studiously toed a nonpolitical line for three decades when she was called to testify at Trump’s first impeachment trial.

The scandal of Trump’s call to Zelensky to ask “a favor” before he would release $400 million in military aid approved by Congress flipped the script. Giuliani associates Parnas and Fruman had been arrested at Dulles Airport with one-way tickets to Vienna to escape federal indictments. Yovanovitch became a witness for the prosecution of the real crime committed in Ukraine, maintaining her calm demeanor throughout hours in the spotlight of live national broadcasts, a traumatizing experience for the soft-spoken introvert being cast as a swaggering “badass.”

The epilogue of “Lessons from the Edge” presciently forecasts danger for Ukraine inflicted by Trump ignoring Putin’s menacing of his neighbor and his exploiting of divisions within the United States. Trump’s disparaging remarks about NATO gave Putin a green light to invade Ukraine.

“We can’t allow Russia to dominate its neighbors,” she wrote before Putin began waging war against the aspiring democracy Zelensky has so fiercely defended.

“Will Zelensky succeed in his ambitious plans — plans that would set Ukraine on a better path and turn the country into a better partner for the U.S.? No one can say, but I hope so, and I place my faith in the Ukrainian people, who persist in demanding a new Ukraine.”

I first met Masha Yovanovitch in the spring of 1984 in New York City, introduced by a colleague at the Associated Press who had been Masha’s roommate at Princeton and knew we’d eventually be plying our respective journalistic and diplomatic trades in the Soviet Union. In mid-1990s Russia, our Moscow postings coincided, and we lived in the same foreigners’ complex in the shadow of an enormous statue of Lenin on October Square.

By this time, we had many mutual friends among diplomats, correspondents and the burgeoning business community and socialized in the same circles. Journalists are less circumspect in disparaging our leaders, and nary a brunch or cocktail party didn’t involve a spirited debate about the president in power and his electoral rivals. Masha never rose to the bait. I remember how she would tune out of conversation about our leaders’ weaknesses or failures. I learned to steer the talk elsewhere when I was hosting. Which is why I was outraged when Trump and his influence-peddlers tanked her career with disparagements alleging she was disloyal to the president.

The United States lost an honest and dedicated representative of our democracy when Trump deposed her for standing up for what is right. I have asked her more than once why she won’t get back in the game now that we have a president who respects Western unity and integrity. She claims no interest on either her side or our foreign policy community. I find that hard to believe.

Carol J Williams
Carol J. Williams is a retired foreign correspondent with 30 years' reporting abroad for the Los Angeles Times and Associated Press. She has reported from more than 80 countries, with a focus on USSR/Russia and Eastern Europe.
Previous article
She’s Baaack! Sarah Palin Joins the Stampede to Succeed Alaska’s Don Young
Next article
Can Seattle Arts Find a New Model for Flourishing After the Pandemic?