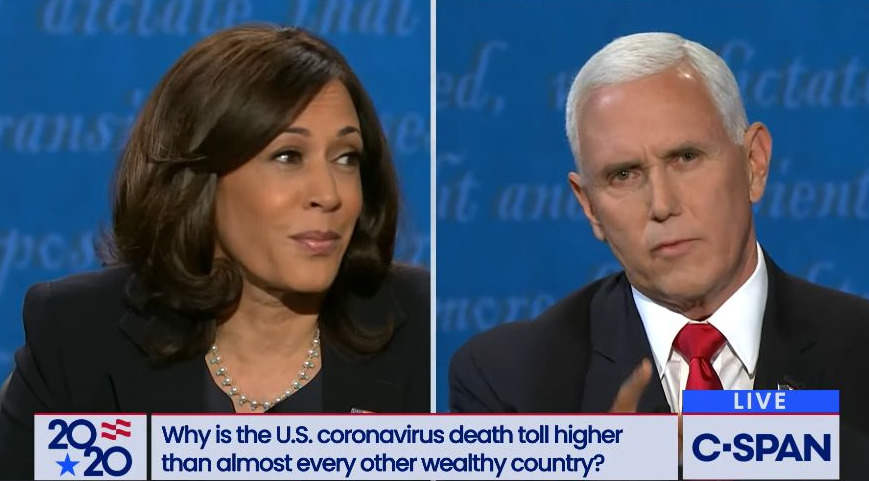 It’s probably unsurprising that Vice President Pence was appointed for tonight to carry the tattered, worn Republican flag of tax cuts, tax cuts and less and less regulation of corporate interests, in contrast to Trump’s red meat rants for his base a couple weeks ago.  And, of course, Pence made claims about the administration’s opposition to health care insurance, aspects of Obamacare such as protection for pre-existing conditions, that fit with the smaller government positions of the Republican party, claiming without a sentence of content  that they have a replacement. This approach may have been an attempt to reach beyond Trump’s rabid base, but wasn’t overall convincing.

Nevertheless, beyond constant claims about these policies, Pence pushed hard with claims about what good things Trump supposedly has done. He lost that point on the trade war when Kamala Harris hit him with job losses and the impact on farmer incomes.

In sum, he has to have lost points with any undecided voter by constantly talking beyond his time limit. Susan Page will be criticized for letting him get away with it so often. Harris’s solid, patient calm served her will in contrast.

I though the whole thing was appropriately symbolized when a fly landed on Pence’s perfect hair and hung out there for a while.

Dick Lilly
Dick Lilly is a former Seattle Times reporter who covered local government from the neighborhoods to City Hall and Seattle Public Schools. He later served as a public information officer and planner for Seattle Public Utilities, with a stint in the mayor’s office as press secretary for Mayor Paul Schell. He has written on politics for Crosscut.com and the Seattle Times as well as Post Alley.
Previous article
“Managing Chaos”: Michael Cohen Dishes on his Mob Boss
Next article
Interruptions by any other Name