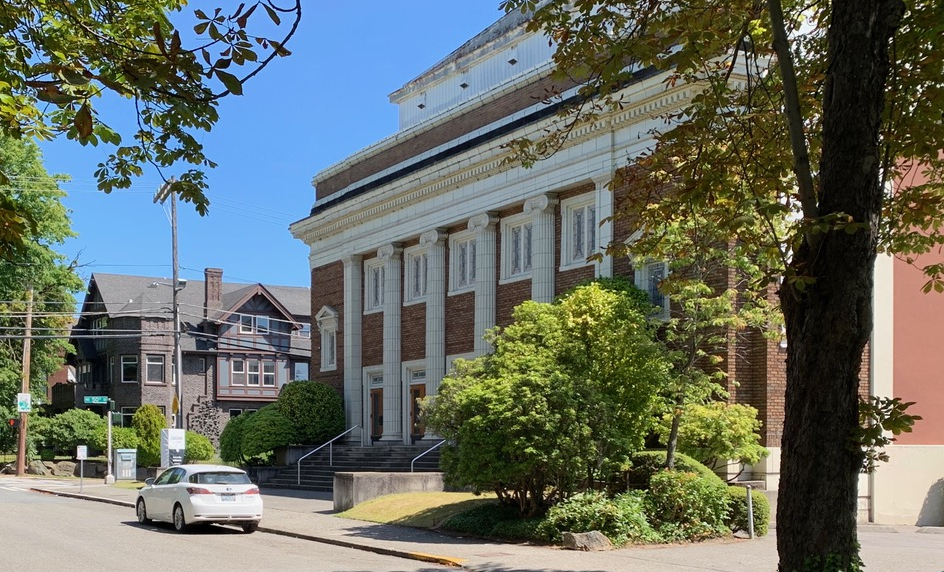 Another Old Church Building On The Edge Of Demise

Along the wildly ungroomed boulevard just north of Greek Row in Seattle’s University District, a few masked joggers and dog walkers move along the sidewalk at 17th  Avenue NE and NE 50th Street. The fraternity and sorority houses to the south look empty and neglected, too.

The monumental building on the southeast corner, long known as Third Church of Christ Scientist and lately as Churchome, needs a new owner or it may be reduced to rubble. It looks a little like an old library or museum, with one very important difference. It’s not protected by landmark designations. And so the land beneath it—just like the parking lot beside it—can be sold and redeveloped just like any other parcel. It’s listed with CBRE as 4740 17th Avenue NE, along with the parking lot beside it. The CBRE brochure calls it a 21,600-square-foot parcel in a mid-rise zone, and it offers two development scenarios—one retaining the legacy building and one without it.

Much of the University District has been recently upzoned. Even as apartment towers fill up the dense center of the University District, old churches—ones that once seemed as permanent as the protected buildings on the UW campus—are quickly going away. Church buildings are the orphans of preservation because of churches’ protected legal status, immune from landmarking.

Their stories follow a pattern. Membership is aging and thinning and moving away. Major repair bills are mounting, and real estate values are skyrocketing. Neighbors, preservationists and other civic types might sing the building’s praises and dream about other uses, but cash and a new user are necessary to renovate a building and bring it up to code.

Bricks and mortar are a legacy, but a church is more than a building. So strapped groups sell their property, invest in mission-based goals, or move to (or combine with) smaller churches. A building that once anchored a neighborhood is sacrificed by the congregation that owned it. Shocked neighbors may not even realize the owner was under stress and the future of the building at stake—until it’s too late. It seems that saving legacy buildings is not the most Christian thing to do.

There are many examples of this end-of-life saga in the once church-populated University District. One nearby site—the grand neo-gothic brick campus of University Christian Church at 4731 15th Avenue NE (1915-1928, designed by John Graham Sr. and other designers and craftspeople) is now a large hole in the ground. The congregation has joined with a sister group in Lake City. Signs say the complex will be replaced with 224 apartment units in a 22-story tower. University Temple United Methodist Church, at 1415 NE 43rd Street (1928, John Graham Sr.) is slated to be cleared next year to make way for a similarly tall mixed-use building. The congregation will stay, accommodated by a new worship space.

Third Church is one of the few old churches left standing in the University District.

Precious landmarks, you may say, so why can’t a city long committed to historic preservation keep these reminders of history? In fact, the usual Seattle landmark protections are useless unless building owners voluntarily seek landmark status. Other buildings can be nominated and landmarked by the city or  third parties. However, citing the First Amendment’s provisions for separation of church and state, courts have repeatedly sided with religious groups who do not want restrictions—including historic preservation—encumbering the properties they own.

Yet some religious groups have chosen historic preservation. One is the landmark University Unitarian Church at 6556 35th Ave. NE (1960, Paul Haydn Kirk). Unitarian congregations are known for embracing modernist architecture, so it’s no surprise that this one sought out Kirk, a master of Northwest Modernism, to design its new home in 1958. It’s touching to read the words of then-minister Aron Gilmartin, who wrote “It must be a place where people may gather for worship, where children may be taught to work and pray, and where the community is enriched by its presence.”

University Unitarian was built on a shoestring in a single-family neighborhood, with members donating materials and labor, and it was promptly recognized with an architecture award. In recent years, it was lovingly restored by the same congregation.

The Third Church congregation did not go that route, though it took some steps on this path. Members of the Christian Science congregation, who now worship in a smaller sanctuary behind their reading room in the University District, are proud of the building their predecessors built in 1922. The architect was George F. Dunham, who also designed the even grander Fourth Church of Christ Scientist on First Hill (now Town Hall Seattle), according to historian (and church member) Cindy Safronoff.

When her congregation faced the familiar dilemma soon after the millenium, they found a new home and made a good-faith effort to find a future use for their building. They were inspired by Town Hall Seattle, converted in 1998 when the sanctuary was purchased by a group of citizens who wanted a common home for musical and civic groups, and has recently been fully renovated. The First Church of Christ Scientist on Capitol Hill converted to residential condos.

In 2005 the owners of Third Church tested the market for their building and received an offer from a man who seemed committed to converting Third Church into a performance and lecture hall.  The church members hoped their own auditorium, with light filtering through the glass in the vaulted ceiling, might become a lecture and meeting venue for the UW and surrounding neighborhoods.

The details of that transaction are difficult to trace, but contemporaneous accounts indicate that after it was finalized the parties found the building had already been deeded to Churchome (then City Church), a booming multistate evangelical ministry with a growing real estate portfolio. The sanctuary was soon packed with young adults and bristling with video cameras. Churchome could not be reached for comment, but the group applied for a demolition permit this year before putting the property on the market.

Eugenia Woo of Historic Seattle, a public development authority dedicated to saving buildings like Third Church, wants to talk with sellers about possibilities for preserving the building and stands ready to work with prospective buyers. That conversation has not begun, Woo says.

Or maybe it ended years ago, when Christian groups were fighting denominational wars. In a May 2007 article in Seattle Metropolitan Magazine, Kathryn Robinson wrote that the 2006 sale of Third Church was a moment when conservative churches were poised to take over desperate University District mainline churches. The Methodists (University Temple United Methodist) and the United Church of Christ (University Christian Church) were tired of their struggling collegiate missions. Megachurches like Overlake Christian Church and Mars Hill Church, booming with youthful seekers and rockstar ministries, were making overtures. Robinson quotes “church real estate specialist” Bryan Mangam: “Young seekers will reject old architecture.”

Organizations like Historic Seattle often are the best hope for civic-minded groups interested in finding a new life for the building. According to Woo, the group can provide technical expertise and help identify potential partners in reusing Third Church at a critical time, just as it did in the decade-long effort to purchase and adapt Fourth Church on First Hill into Town Hall Seattle.

Another resource is Philadephia-based Partners for Sacred Spaces, which works with the National Trust for Historic Preservation to help local congregations navigate the sometimes difficult process of saving their building (and their balance sheet) while helping their neighborhoods retain their historic identity.

But adapting these old buildings is often a costly and politically fraught task. It’s not clear, for instance,  how long the current owners of Third Church are willing to wait for such a rescue mission. Nearby homeowners grow accustomed to lightly-used churches and can oppose new projects that might produce choked streets, competition for parking, and tall, blank walls next door.

The lowrise and midrise streets—the ones where the old churches of the University District are found— bear the brunt of up-zoning. Mapping “historic resources,” (planner-speak for urban markers like old storefronts and churches) could help, if accompanied by carrots and sticks for preservation and reuse. Low-rise neighborhoods could be more attractive to new and old residents with a fine-grained zoning map that limits explosive development and preserves historic buildings.

The economic downtown may not be the best time to sound emergency alarms, tough the property value might decline to where new users appear. At any rate, Third Church now hangs by a thread. The building is an opportunity tailor-made for people who like local lectures and performances. It’s close to the University of Washington, another possible user.

Who will the owners be, and can they ride to the rescue in time?

Clair Enlow
Clair Enlow is a freelance journalist writing about architecture, planning and history. She’s a Loeb Fellow and an honorary member of AIASeattle.
Previous article
Why Everyone’s Moving To Ellensburg
Next article
Crystal Ball: Eight Transformations for a Post-COVID Seattle