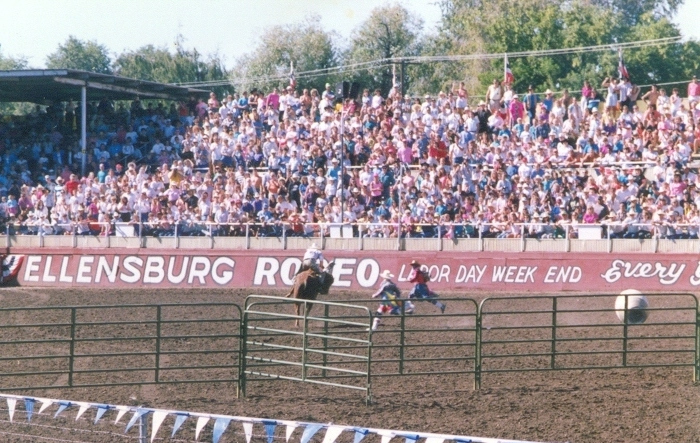 Why Everyone’s Moving To Ellensburg

Along with all the other disappointments of the Coronavirus era, there will be no Ellensburg Rodeo this year. But there must be a whole lot else going on in Kittitas County to make it the fastest growing part of Washington State.

The new state population estimates show Kittitas County growing 3.4 percent last year, and 7.6 percent over the last three years, both figures tops in the state. They aren’t in the middle of a baby boom: births barely outnumbered deaths in 2019. Rather, folks are moving there in large numbers. Kittitas had the state’s highest rate of net in-migration over the past three years, as seen in Figure 1.

About 30 percent of those migrants come from other states, and 70 percent come from within the state. According to Internal Revenue Service data for the 2017-2018 period, the top counties for in-migrants to Kittitas county were: King, Yakima, Pierce, Snohomish and Spokane. Among those moving from out of state, driver’s license data for 2019 shows that the most popular origins are the usual suspects: California, Oregon, Texas, Arizona, Idaho.

All this in-migration has, predictably, had a large impact on housing prices. According to the Northwest Multiple Listing Service, prices in Kittitas County are up 24 percent in the past 18 months. The market is down to just 1.6 months worth of inventory. Per capita personal income has increased only 7.5 percent in real terms in the past 10 years, so income growth will not likely catch up to housing price growth.

Part of a bigger story

The story of growth in Kittitas County is part of a larger pattern that first emerged in the early 2000s and has reappeared: migration into parts of the state that are between one and two hours from Seattle, and that make attractive retirement and or telecommuting destinations. Figure 2 shows the net migration rates from Figure 1 as they occur around the state.

Note that the counties in the Seattle area are sitting around 1 percent, while nearly all other counties in Western Washington are growing faster. And housing prices are following, with Clallam, Jefferson, Mason, and Grays Harbor counties seeing double-digit home price increases in recent months.

Back in the 1990s we heard a flurry of stories of people moving to Kittitas County after balking at housing prices in East King County. Carpools were said to bound over Snoqualmie Pass each morning heading to tech companies on the Eastside.

That might be happening again. If so, it will be driven by home prices, but also a newfound ability to work from home and only occasionally visit an office. In addition, retirees who may have planned to stay in their suburban home may decide that being in a smaller, less connected community is better for their health. As of July 8, Kittitas County reports zero deaths from COVID-19.

If people working in the Seattle area do begin to move in large numbers to outlying counties like Kittitas, the implications for housing prices are very significant. Local housing prices (or, more accurately, the prices of the land underneath houses) tend to be tied to local productivity and wage rates. By bringing Seattle area wages into a housing market that has been defined by lower wage rates risks driving prices up well beyond what the local wage base can afford. And these counties tend to be locked into growth management plans based on growth projections that do not include this dynamic. What may, from a Seattle area perspective, seem like an affordable place will rapidly become unaffordable to those working in the local economy.

Michael Luis
Michael Luis is a public policy consultant who has been wrestling with housing, growth and economic development issues around Washington State for over 30 years. He is author of several books on local history and served as mayor of Medina.
Previous article
It’s Back: The Virus That Never Went Away
Next article
Another Old Church Building On The Edge Of Demise