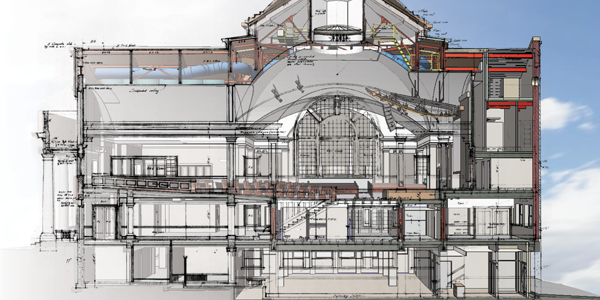 It was a very happy night last week when Town Hall Seattle, a performance complex on First Hill, reopened after two years of extensive renovation of the handsome old church. At a time when arts groups in Seattle are struggling with debt and funding shifts, here was a remarkable counterpoint: $33.6 million raised over a five-year campaign. Bravo! we all thought and said at the ceremony.

The renovation is both modest and substantial. Modest because it is very respectful of the Roman Revival architecture (dating to 1922). The former sanctuary upstairs retains the pews, the colored glass windows, and the shallow arches of the ceiling. The middle-level lobby is repainted and carved into performance and reception rooms (and new bathrooms, much needed). My favorite of the new spaces is The Reading Room, a small performance and meeting space at the lobby level where offices once were, and funded by Yazmin Mehdi and Liam Lavery as a tribute to Yazmin’s parents. The gleaming white terra-cotta exterior is landmarked and unchanged. The big change is the lower level, now named The Forum, which has been transformed from a church-basement feel to a flexible night-club feel with bar, moveable stages, a library-lounge, and multiple configurations. The lower level has a new entrance on the west side, where a small new park will be created in the next two years.

The big changes are harder to see: complete seismic upgrade, a new elevator, new HVAC system (artfully hidden) that will extend Town Hall’s season to summers (too hot before), a reflecting canopy over the main stage to smooth out the uneven acoustics, and theater and recording equipment that will give Town Hall ways to record, archive, and broadcast many events.

It wasn’t the easiest campaign to pull off. There were building surprises (oil tanks, surprise asbestos). The extraordinary executive director, Wier Harman, had to battle back from a serious cancer that struck in the middle of the campaign. Completion of the renovation was delayed by seven months, causing scheduling problems for the many arts and civic groups that rent Town Hall. The fundraising goal kept moving upward (no surprise), a challenge for a relatively small organization and board. And yet, they prevailed!

The result is a huge advance for what Town Hall can produce and for renters of the facility. Under Harman’s leadership, Town Hall has held ticket and rental prices down (this continues after the renovation, with the standard $5 ticket prices holding steady). He and the board have long favored the kind of before-and-after events (meeting in the new Otto Bar, having food and drink and small discussions) so that audiences don’t just consume the evening’s talk or discussion but also get activated to change their lives and their community. The goal is to have most evenings at Town Hall become this sort of “double-header.” Harman expects the new Town Hall to be able to host 500 events a year. This is one ambitious organization, maybe the best of its kind in the nation.

As it happens, I was on hand for the birth years of Town Hall, planting the acorn that grew up under my remarkable successors into a mighty oak. Town Hall evolved organically from its early days, when maps didn’t exist, to the beloved and grand institution of today. Who would’ve thunk it? Certainly not me!

The seeds were planted in the late 1980s. I had helped to start an organization called Seattle Camerata, putting on classical music recitals at off-beat locations. The model for this was a similar group, still going, in Los Angeles. Gradually we and other mid-sized musical groups agreed to combine forces and look for a common performance hall. We first tried to raise the money to renovate the old sanctuary of Temple de Hirsch Sinai, a lovely, run-down building at 16th and E. Union that was no longer needed by the Temple but landmarked and so not easily torn down (as eventually happened). I attended a meeting to see if there were any takers to try to raise the money to save the building. I bit.

I had my eye on the Fourth Church of Christ Scientist, on First Hill at 8th and Seneca, for possible Camerata performances (sorry, no rentals), so I perked up when a determined member of the church, Alice Dickey, saw the P-I article and came to see me about her quest to get the big old church (once the grand edifice of Christian Science in Seattle) into good hands (the congregation was down to low double-digits). And so began a seven-year quest to convince doubters in the congregation to sell and doubters of me to pony up the $1.7 million purchase price. To my astonishment and with a lot of help from Historic Seattle and our donor mainstay, Patsy Collins, we pulled it off in 1998, narrowly saving the handsome edifice from turning into a parking lot. I was the dog who caught the truck.

We knew we wanted to have a music venue, even though some of our original members had perished or defected to other halls. The original plan was to use it for small orchestras, chamber music, early music, and then to rent it the rest of the time to private parties, weddings (BAD idea), graduations, fundraisers, etc. We were feeling our way, as the idea of a mid-sized, multi-arts venue had few blueprints aside from one in St. Louis (The Sheldon) and two in New York City (such as the famous 92nd St. Y).

Once again, an “Alice” appeared providentially to shift our course. This was when Elliott Bay Books decided to take a chance on author events too big for the bookstore. We worked out a deal: free rent, the bookstore kept the money from book sales, and Town Hall kept the money from admission charges. Like what? $5? Let’s try that — and so Town Hall had a formula and an appealing brand (big-name speakers, big-bargain prices).

The town’s huge appetite for authors and ideas and progressive politics took it from there. Town Hall kept its music but began to fill up with all kinds of programs, all kinds of audiences. Since there was no clear blueprint, we mostly answered the phone, showed folks around, and let the place follow the community’s lead. I did finally discover just the right model, namely New York’s Symphony Space and its inspiring leader Isaiah Sheffer, my hero. Just hang loose and avoid strategic plans, Isaiah advised, and when someone walks in saying he or she is The Next Hot Thing, you come right back with “How about next Tuesday?”

How about the next leader of Town Hall? Town Hall was the right idea, the right building, the right location, the right city. So I better get out of the way, hire a real professional, don’t blow it. So the board and I went out and had the next big lucky break when we found and in 2005 hired Wier Harman, a theater director who had learned his way around Seattle arts a few years back. He’s been amazing — programming, developing a board, fundraising, supervising the renovation, keeping the flag flying with remote locations during construction, never getting daunted even when scary-sick.

The rest is history, a happy history. It is really the creativity of this town, its groups and its audiences, that made Town Hall happen. As I know from the numerous phone calls from other cities, many towns would love to have such a vital facility, serving affordably and with marketing moxie so many creative, spunky organizations. But few have managed to pull it off (the usual problem is the lack of a building to convert). Seattle did it, with roses.

Go see for yourself in this homecoming month.