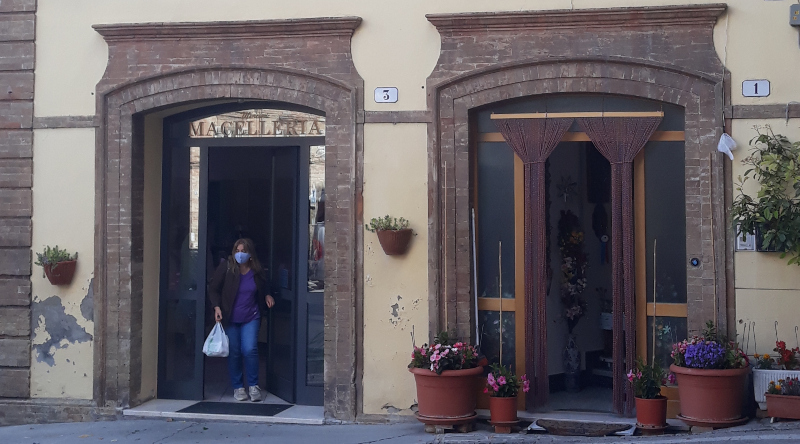 In my career as an architect, urban planner and urban designer I spent decades talking about the merits of mixing uses together . I designed places and buildings to accommodate mixes of different uses. And I wrote regulations and guidelines for cities to encourage mixed use to happen.

But now I see this through a new lens.

After I retired, we purchased a house in Italy. It’s located not far from the main street that winds thorough the village. In the U.K. that would be known as the High Street. Our street, by contrast, is not a high street but rather a back street. Yet, we have a storefront. Or rather a space that could be used that way.

In Italy, many residential structures, including detached homes, have such a space on the ground floor. In some places these are used for actual shops, cafes, or restaurants – what we traditionally consider to be ground floor retail uses. But as I look around, I see that most of them are NOT filled with retail businesses.  The mechanic who services our car operates out of one, albeit larger than our space. He has one employee and they pick up the vehicles and return them when finished, so there are rarely more than a handful  of cars sitting outside. Everything is hidden behind big bay doors. As car repair shops go, its pretty inoffensive.

One of our food markets is run by an elderly woman and her husband who live across the street from their store. The ground floor space in their house is their stockroom. Above the market itself, there are several small apartments.

We have seen this same pattern in many other towns. In one town, known for its hat making artisans, we would pass by a shop that seemed perpetually closed. Finally, we stopped and noticed a note on the door that said to call the owner. We did and within a minute she came down and opened up the shop.

More often than not, apartment buildings have small, family-owned businesses on the ground level. They are generally small, similar to our own space. This means that people have the ability to operate a business with low rent and overhead.  Often a member of the family is the sole other employee.

The house a few doors from us is owned by an orthodontist who receives his clients in his space. A friend of ours uses his ground floor space for a photographic studio. Its not a retail operation but his door is always open so that people can drop in to chat. Several blocks away, a resident uses the space in his house for a small barber shop.

We recently learned that the matriarch of the family that owned our house for generations used the space we have to make curtains for people in the village. It wasn’t a shop per se, but a workshop. We have come to know an artisan in a nearby town who uses his space as a place to make a traditional type of regionally-specific pottery. Its also not a formal store, but a working studio where you can see the products being made and fired in a big kiln. You select your purchases from the shelves where the ceramic items were placed to cool.

The wonderful thing about these spaces is that they recognize the important “seam” between a building and its adjacent street. Its where life is most evident: Human contact. Socializing. Face to face commerce. Small scale services. Products of the hand.  Edges of places are often interesting because they are where the public and private realms touch and interact.

The global onslaught of Covid-19 has shattered economies all over the world. In some cases business models like department stores  and shopping malls that were already on the edge, are now on their way to disappearing altogether. We have also discovered that many people can work from home, indeed many would prefer to work from home. Unfortunately, in many places, particularly in the United States, local zoning regulations have made illegal anything other than a home office tucked into an unused bedroom.

Its time to change those laws. This newly emerging economy will likely be much more diverse, much more small scale, much more personalized and specialized than what we have seen over the last sixty years.  Home-based work places can accommodate many types of businesses and have for many centuries. Perhaps we have come full circle and are returning to this simple, beautiful model.

Mark Hinshaw
Mark Hinshaw is a retired architect and city planner who lived in Seattle for more than 40 years. For 12 years he had a regular column on architecture for The Seattle Times and later was a frequent contributor to Crosscut. He now lives in a small hill town in Italy.
Previous article
Godden on West Seattle: Bring Back the Mosquito Fleet? (and other news)
Next article
Set to Soar: This Week in Space