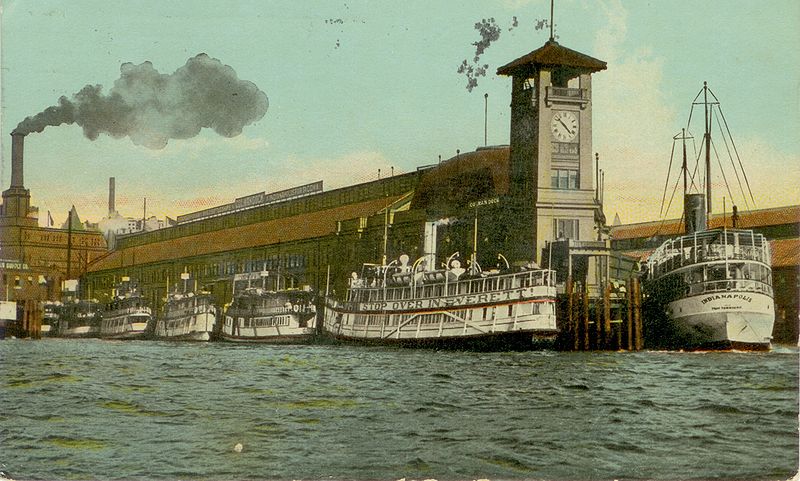 Godden on West Seattle: Bring Back the Mosquito Fleet? (and other news)

When the West Seattle bridge abruptly closed March 23 to forestall collapse, I called my brother Harry, a civil engineer now living in Hawaii playing tennis and cycling when not called to California to consult on high-speed rail. I call Harry when a bridge fails; he calls me when a journalist goes to jail. It’s a sibling thing.

I briefed Harry on the history of the high-level West Seattle Bridge. Plans for a bridge were launched in a 1968 Forward Thrust bond issue, killed by a scandal that sent Democratic officials to prison but resurrected after the Greek freighter Chavez rammed the old drawbridge. (The pilot, Captain Rolf Neslund, was later murdered, although not for sloppy seamanship.)

Following that disastrous collision, the state’s all-powerful Sen. Warren Magnuson secured a $60 million grant for a high-level bridge. Port of Seattle commissioners, envisioning piers along the Duwamish, had insisted the new bridge be built to clear the tallest ship’s mast. Ironically, they later discovered the desired big ships couldn’t maneuver in the narrow waterway.

After I called, my brother sent questions, technical stuff like: Are the reinforcement rods still sound and not corroded? Have cracked areas been X-rayed and cored? And could a repaired bridge be opened for automobile traffic only?

Meanwhile we’re hearing ideas of how to get to and from West Seattle. Solutions include more water taxi trips, fleets of Metro shuttles, routing car ferries into downtown Seattle and a Mosquito fleet recalling the era between two world wars. There also are permanent solutions like a tunnel under the Duwamish, building a gondola like Portland’s, and a sky train like one in Vancouver. There’s even a wild (new/old) proposal for West Seattle to secede, forming its own self-reliant city.

Fortunately, some put-upon West Seattleites have not lost their sense of humor. One jested that, with the low-level bridge restricted to essential workers and first responders, “the only way I’m getting out is to call for an ambulance.”

Ballot falloff: Political pros are warning that most money issues on this fall’s ballot are unlikely to succeed in uncertain times. Despite a tax approval in nearby Portland, they say that the only probable winner locally is the King County’s $1.7-million bond measure to revamp Harborview Medical Center. In today’s climate, improved medical facilities do matter.

Twisted Tweets: Some of the most outrageous fun encountered during the pandemic is the City of Kent’s twitter site, home of random comments, animated GIFs, and made-up news items. Logging on, you learn that Kent’s new police uniforms will come with “shorts instead of pants, saving money for flashy boots.” Kent’s twitter contrasts sharply with sites like Seattle’s where we’re advised to “wear a face mask.” Who’s behind Kent’s Onion-style reporting? Rumor implicates Kent media manager Bailey Stober, one-time head of the King County Dems.

Book shelf: Faced with shuttered library branches, residents still are finding books to read, either through digital connection with Seattle Public Library or by mail delivery from Amazon and independent bookstores. What are they reading? Recent favorites: “The Splendid and the Vile,” Eric Larson’s chronicle of the Churchill family, and “The Last Trial,” Scott Turow’s explosive legal thriller.

Women win: Women are likely to make even more inroads into the political scene than they did in 2018. Women now make up 47 percent of candidates who have filed for the state legislature. At the same time, feminists are dismayed over news that seven of the eight candidates for lieutenant governor are male and the fourth is a conservative woman who badly failed an attempt to win a Seattle City Council position.

Bridge humor: With the West Seattle Bridge closure, we have a revived candidate for the ultimate Seattle joke, this oldie: “What did Capt. Neslund say when the ship hit the span?” The answer: “My wife’s going to kill me for this.”

Jean Godden
Jean Godden wrote columns first for the Seattle Post-Intelligencer and late for the Seattle Times. In 2002, she quit to run for City Council where she served for 12 years. Since then she published a book of city stories titled “Citizen Jean.” She is now co-host of The Bridge aired on community station KMGP at 101.1 FM. You can email tips and comments to Jean at jgodden@blarg.net.
Previous article
Take Back the Streets: Remaking Seattle As ‘The Outdoors City’
Next article
Elsewhere: The Store-Fronted Home – Rediscovering an Old Idea