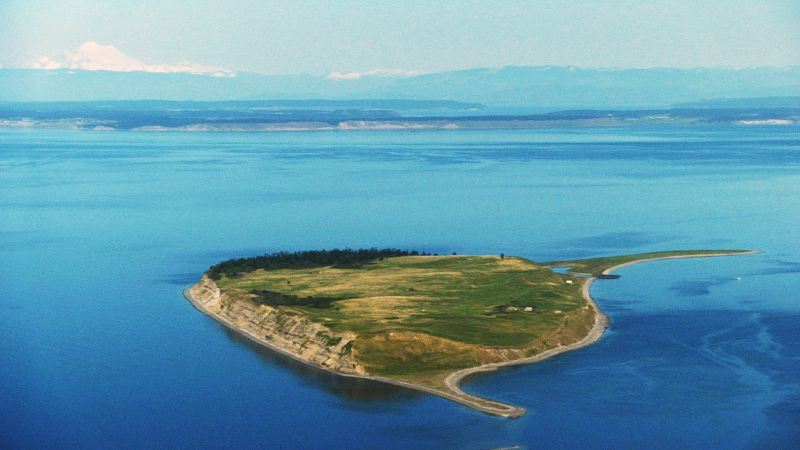 When the governor issued his unprecedented “stay in place” order, Marty Bluewater listened and shrugged. OK, he thought. I can live with that.

Fact is, he has been living with it for some 20 years. As the sole resident of Protection Island, the two-mile long bird refuge at the entrance to Discovery Bay, west of Port Townsend, Bluewater has to be one of the best-distanced souls in Puget Sound country.

“There’s been no real change for me,” he says, peering out his window at the snow-clad Olympic peaks reflected on the glassy surface of the bay.  “I used to make occasional trips into town for a movie or whatever. I can’t do that anymore, but I really don’t miss it.”

Bluewater is a tall, thickset, bronzed 71-year-old with thick, shoulder-length hair and a casual, easy-going manner that welcomes visitors to his waterfront homestead. These days, most of the visitors are seabirds – bald eagles and rhinoceros auklets  and thousands of glaucous-winged gulls that recently returned to the island where they are paired up, two-by-two, ready to nest. Over the years, he’s become accustomed to “the yakety-yak” of the swarming gulls and to the coating of guano they deposit on his roof and deck.

It’s all part of what he calls “living the dream” on an island otherwise set aside as a federal wildlife reserve, off limits to people, automobiles and boats.  Bluewater is the one exception, having bought his spectacular lot nearly 50 years ago, long before the island was set aside for the seabirds.

Bluewater’s rustic home is a case study of the inevitable tension between private property rights and efforts to preserve places where wildlife can exist with minimal human intervention.

Protection Island is shaped like a horizontal comma, stretching east to west across the mouth of the bay. It was one of the first places visited by the British explorer George Vancouver and his crew when they arrived in 1792 to begin mapping the Northwest Coast. In his journal, the dour sea captain waxed poetic about an island landscape “as enchantingly beautiful as the most elegantly furnished pleasure grounds in Europe.”

Over time, the island, situated in a bay named for Vancouver’s ship, “H.M.S. Discovery,” was inhabited by a few farmers who tried to raise grain and livestock, but were discouraged by the isolation, winter storms, and the lack of potable water.

In 1965, the island was bought by Seattle investors who subdivided it into some 800 vacation lots, complete with a small marina and a dirt airstrip.  Bluewater, who had just graduated from the University of Washington, paid $7,000 for his south-facing view lot atop a 150-foot bluff.

The development was challenged, however, by environmentalists who argued that the island provides important nesting for gulls, puffins, and other seabirds.  The result was a classic conflict between two groups equally enamored of the same real estate – one as a vacation getaway, the other as a wildlife reserve.

Eventually, the birders prevailed, persuading the Reagan Administration to designate the island as a refuge.  Most of the landowners sold their lots to the government, but a few were allowed to remain as inholders. Today, just three cabins remain – one for the government, one for occasional wildlife researchers, and Bluewater’s.

At the time, Bluewater was still working for the City of Seattle, but he was able to build his rustic cabin using driftwood and materials brought piece by piece from the mainland. He moors his boat at a small government dock, drives a rickety van up and down the island, hooks his appliances up to a gas generator and draws fresh water from an aging wooden water tower at the top of the island.

For many years, he made only occasional visits. But since retiring some 20 years ago, he’s spent more time at his island refuge.

“It’s a lot easier than it used to be because of this,” he says, pointing to his smartphone. “With this, I can stay in touch, watch the TV news, stream movies, download books…  What else do I need?”

While he’s comfortable living alone, he insists “I’m not a hermit.”   Weather permitting, friends come out to visit. And, when necessary, he ventures back to civilization to resupply with food, fuel and whatever else he needs.

And what’s the downside?  He thinks it over. “I can’t think of one,” he says. “Being alone you learn what life is really about.”

It’s a lesson, he says, that people everywhere may be learning amid a grim pandemic.

This article is reprinted from Rainshadow Journal.

Ross Andersonhttps://rainshadownorthwest.com/
Ross Anderson is a founding member of the Rainshadow Journal collective. He retired to Port Townsend after 30 years of journalism at the Seattle Times.
Previous article
Inside the Idiocracy: Alexa Answers it All for You
Next article
Off A Cliff Without A Tax: An Almost-Agreement on King County Taxes Falls Apart