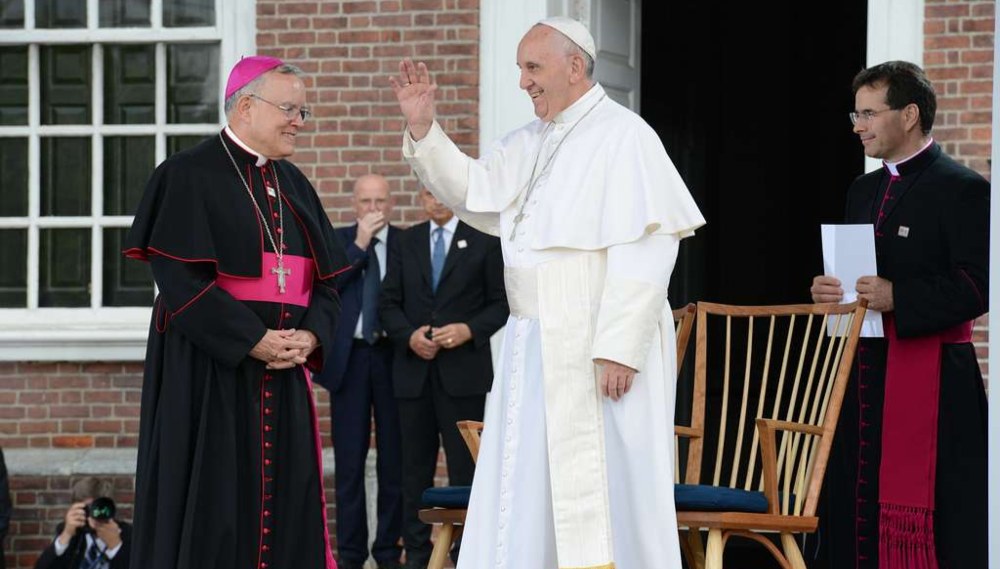 The 86-year-old Pope Francis rose from his wheelchair last week to bless the coffin of his 95-year-old predecessor Pope Benedict XVI in St. Peter’s Square. Francis seemed frail but apparently still full of resolve to complete important and even transformational work of the Catholic Church before he retires or lies in repose.

The Pope is challenged with recasting the College Cardinals which will elect his successor, to reflect a church growing in the developing world even as it declines in Europe. Francis is also intent on remaking the Catholic hierarchy in the United States, which has become a font of conservative resistance to the Pope, whose ministry addresses social tolerance, gross economic inequality, and human despoiling of planet earth.

When Francis named 16 new voting cardinals last spring, only one was from Italy.  With their installation, just 40 percent of 137 cardinals who convene to pick the next Pope are European, down from 52 percent in 2013 when Benedict retired.  Asia-Pacific representation is up from 9 percent to 17 percent, sub-Saharan Africa from 9 percent to 12 percent.

The single cardinal named from the United States was significant.  Francis elevated Bishop Robert McElroy of San Diego, a diocese never before headed by a cardinal.  “By choosing him to be a cardinal, Pope Francis is sending a powerful message to the American bishops and church,” opined the Jesuit magazine America. McElroy professed himself “stunned and surprised” at his elevation.

In picking McElroy, Francis bypassed Los Angeles Archbishop Jose Gomez, then president of the U.S. Conference of Catholic Bishops. While a cardinal has traditionally headed the Los Angeles archdiocese, Gomez proved a maladroit leader of the USCCB. He decried the Black Lives Matter movement and, without consulting brother bishops, he issued a hostile, snarky letter when President Biden, a practicing Catholic was inaugurated.

Nor did Francis give a red hat to now-retired Philadelphia Archbishop Charles Chaput, a leading practitioner of the “wafer wars” advocating denial of holy communion to pro-choice Catholic politicians.  Francis also made a cardinal of Newark, N.J., Archbishop Joseph Tobin, a prelate exiled under Benedict and described by National Catholic Reporter as “the kind of leader Francis wants — close to the people, not a culture warrior, with heart for the poor and the marginalized.”

Meanwhile, the U.S. Conference of Catholic Bishops (USCCB) elected a slate of culture warriors to leadership positions last fall.  The USCCB’s incoming secretary, Oklahoma City Archbishop Paul Coakley, recently decried gender alteration as “well-intentioned madness” and told the conservative Napa Institute: “If the Devil can confuse society about sex and gender, he obscures our understanding of God’s plan for humanity at its very roots.”

Francis has set about naming a new set of more pastoral bishops.  He tapped an auxiliary bishop from San Diego, John Dolan, to serve the fast-growing but troubled Phoenix diocese.  Dolan was signatory to a letter condemning bullying of LGBTQ youth, and notable for saying “I’m a person who really likes to dialogue rather than shut things down.  I think we are better at church when we have an open heart.”

The pope will have plenty of remaking opportunities. In the coming year, archbishops in Detroit and Cincinnati will turn 75 and must submit resignations to the Pope.  Cardinal Sean O’Malley in Boston is past retirement age but has stayed on at Francis’ request.  Next year, archbishops in Chicago, Milwaukee, Galveston-Houston, Kansas City, New Orleans, Hartford, and Mobile will all reach retirement age.

The American Catholic church has a powerful conservative constituency. It is active nationally with the EWTN Catholic TV network, where programs such as “The World Over” regularly criticize Francis’ priorities. The Napa Institute, headed by retired Gonzaga President Fr. Robert Spitzer, hosts conferences of wealthy Catholics. The conservatism is reflected on the West Coast in such dioceses as San Francisco, Spokane, and Baker City, Oregon.  San Francisco Archbishop Salvatore Cordileone made headlines last year, announcing he would withhold communion from then-House Speaker Nancy Pelosi over her defense of abortion rights.

The Catholic Church hierarchy has traditionally stressed discipline and dogma.  In a top-down faith, “The one duty of the multitude is to allow themselves to be led, like a docile flock, to follow the pastors,” Pope Pius X wrote in 1906 in Vehementer Nos.

No more. Especially in the United States and Europe, laity and reformist clergy have demanded a more open and engaging Catholicism that lives its gospels. Church attendance has declined, first after Pope Paul VI rejected contraception in his encyclical Humanae Vitae and more recently with the clerical sex-abuse scandal. Seattle Archbishop Paul Etienne has acknowledged: “Bishops today face a challenge of reclaiming our credibility.”

The Catholic right in America has been laser focused on two core issues, opposition to abortion and pushing back on acceptance of same-sex marriage and LGBTQ rights.  Leading Catholic conservatives speak scornfully of “cafeteria Catholics,” identified as those who pick and choose between church teachings, and as much as inviting them to depart.

Francis is of a different mind, witness his famous words on homosexuality: “Who am I to judge?” In his encyclical Laudato Si, the pope stressed environmental justice, linking protection of the poor with planet Earth, writing: “Young people demand change. They wonder how anyone can claim to be building a better future without thinking of the environmental crisis and the sufferings of the excluded.  I urgently appeal, then, for a new dialogue about how we are shaping the future of our planet.”

As a St. James Cathedral parishioner, I’ve been invited to meetings in the past year as part of a nationwide synodal process, whose objective is to hear from the people of God.  The process will culminate with a Synod of Bishops in Rome next October. In preparation, meetings will be held at the local, national, and continental levels.

“All of this seems to have already taken on a clear direction, even here in the United States, where there has been resistance to the synodal process:  People like being consulted and the hierarchy has committed itself to listening to what the people in the pews have to say,” Michael Sean Winters wrote recently in National Catholic Reporter.

In the Seattle Archdiocese, a group called Heal Our Church, including two former U.S. attorneys, has called for a Truth and Reconciliation Commission to examine and fully report sex abuse by clergy. Although considered part of “Team Francis” in the American hierarchy, Etienne rebuffed the request. The group has also questioned recent spending of $2.4 million to purchase a Mt. Baker home for the archbishop.

On March 13, Francis will mark the 10th anniversary of his election by the College of Cardinals.  He has upheld church doctrine, for example condemning abortion, but opened church windows to winds of change.  In a recent, groundbreaking move, he named three women – two nuns and a layperson – to serve on the Congregation for Bishops, which vets candidates for open bishoprics around the world.

Francis uses a wheelchair due to knee problems, and rumors have swirled about the pontiff’s health.  He can still show remarkable stamina, as in a penitential pilgrimage to Canada last year, to apologize for mistreatment of Aboriginal First Nations children forced into residential schools where native language was forbidden and sexual abuse was rampant.

The Napa Institute can bring together critics of Francis at pricey conferences, and EWTN can air his critics.  Pro-Francis bishops came up short in leadership elections at the U.S. Conference of Catholic Bishops.  But the Throne of Peter is a position from which to appoint, admonish, inspire, and find contemporary expression of an eternal faith.

Francis enjoys popularity in the pews, as documented by Pew Research findings from a 2021 survey: “Overall, 83 percent of U.S. Catholics say they have a favorable view of Pope Francis, compared with just 14 percent who express an unfavorable view of him.”

The work of Pope Francis in bringing gradual, measured change to his Church is not yet done and may be somewhat easier now that the Emeritus Pope Benedict has died. Francis still has shaping to perform and a gospel to preach.