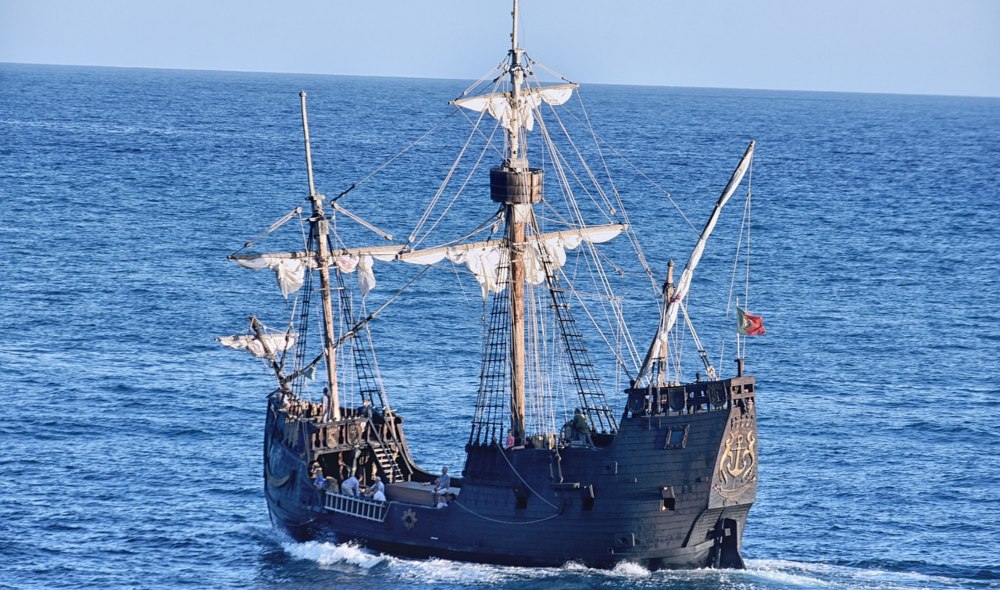 Indigenous Peoples’ Day, October 10, and Columbus Day, the 12th, are two sides of a coin.  Of crushing historical weight, the days — the Event — beg remembrance.

To start with Columbus. It began around 10 pm on October 11, 1492 in the western Atlantic.  An easterly wind blew at gale force.  Of three small ships: Pinta the fastest, ahead of Niña, barely a cockleshell, made over 7 knots.  Pegasus and Cassiopeia shimmered dead ahead, Deneb just beneath the western horizon.  From Santa Maria’s high stern castle three leagues behind, Cristoforo Colombo, the Genoese mariner, saw what looked like a candle flame bobbing ahead and told the deck watch to keep eyes open.  An hour later, a past-full moon rose on the tempestuous port quarter.

At 2 am, Rodrigo de Triana, the lookout on Pinta’s bow, saw a moon-illuminated cliff and gave the call, “Tierra! Tierra!”  Captain Martin Alonzo Pinzon fired a lombard, signaling the fleet to shorten sail, tack, and await Santa Maria.  They drifted south until low land appeared in rising light.  Adding sail, the ships coasted the western shore of what Columbus, exalted and vastly relieved, called San Salvador, Holy Salvation.  He had done it, sailing an unknown sea, crossing in 28 days.

On the other side of the coin that day are the residents of Guanahani (Iguana Island in their Arawakan language), one of many Lucayas, the Bahamas. They woke to see three craft, the likes of which they had never even imagined, passing a mile offshore.  They followed the vessels’ progress until the three stopped in a shallow bay and dropped heavy things that splashed.  The native people launched canua, wooden dug-out canoes, and paddled out to inquire, pointing to the sky.   Canua came off the strange vessels, and men entered the canoes, one dressed in crimson as bright as parrot feathers.  In each canoe a man raised a brilliantly marked cloth.  The mariners landed, fell to their knees and mumbled in unison.  The crimson man spoke loud words to no one in particular.

The native people approached (women hidden away).  The strangers gave gifts of red caps, strings of solid water drops, some beautifully colored, and little metal shells that made charming sounds.  The native people offered food and drink, balls of cotton, parrots, and fishing spears in return.

“I gave…them many other things of small value in which they took so much pleasure and became so much our friends that it was a marvel…  But it seems to me they were a very poor people in everything.  All of them go around as naked as their mothers bore them, and the women also, although I did not see more than one quite small girl.  All of those I saw were young people, for no one did I see of more than 30 years of age.  They are very well formed of handsome bodies and good faces.  Their hair, coarse—almost like the tail of a horse, and short.  They wear their hair down over their eyebrows except for a little in back which they never cut.  All of them alike are of good-sized stature and carry themselves well.

“I saw some with marks of wounds on their bodies…and they showed me how people from other islands nearby came there and tried to take them, and how they defended themselves.  They should be good and intelligent servants.”

There is the key word, “servants.”  Forty years earlier, as the Portuguese began seizing north Africa, they asked Pope Nicholas V to grant them a particular monopoly.  He responded with the papal bull, Dum Diversas, authorizing Portugal’s King Alphonso V to conquer Saracens (Muslims) and pagans and place them in perpetual servitude.  Perpetuity made them a commodity that could be sold to defray the costs of military adventures and colonial administration.

That is the foundation of what is called the Doctrine of Discovery cited by Chief Justice John Marshall in 1823 to justify U.S. claims to native lands.  Colombo wrote to Ferdinand of Aragon and Isabella of Castile, his royal sponsors, to assure them that he had found a way for them to earn dividends on their investment.

Columbus did them one better in December when he sent crews ashore near the eastern end of Hispaniola (Little Spain), which he discovered and charted (strikingly accurate, the chart survives). The crew carried barrels to a stream for water on the trip home.  As they hauled them from the stream bed, sand between hoops and staves glittered. It was enough gold dust to fill two hands full.  He gave this to Ferdinand and Isabella who gave it to the Pope who used it to gild the ceiling of the Basilica Santa Maria Maggiore in Rome, next to the Stazione Termini.  It was the lure of gold that powered the conquest of the New World, also resulting in the deaths of native millions and oppression of the rest.

It was to be a penal colony replacing the Georgia colony lost to Great Britain in the Revolutionary War. Such penal colonies greatly reduced the cost of housing paupers in British jails.  A newly discovered continent, Australia, eventually won that prize, and it came with its own chain-gangs of dark servants with more “blackbirded” (captured)  from nearby archipelagoes as needed.

Vancouver noted that the local inhabitants had suffered a recent depopulation and showed smallpox scars.  Indeed, at least a third had died of the disease a few years before, yet with very few exceptions, the people were courteous and kind to Vancouver and maintained an air of confidence.

That would not last.  The maritime fur trade introduced more pandemics, and Americans trading firearms and ammunition for pelts wreaked more violence and accelerated societal collapse.  Fifty years after Columbus landed on Guanahani, an estimated 12 million Caribbean people had died from disease and oppression.  Conquistadors destroyed the Aztec Empire, the Incan Empire. Disease wiped out cities with impressive infrastructure in the Amazon basin, As we know from a single manuscript penned by a Dominican observer, survivor deaths were so tremendous that African slaves were imported for replacement labor, decimating yet another continent and killing millions more.

The New World Event killed more people than any other cause. It so mystified the Spanish that they gave it no name, likening it to God’s wrath upon the Canaanites described in the Book of the Wars of Yahweh, cited in the Biblical Book of Numbers.  The Black Death killed nearly half of Europeans in the 1300s.  The Holodomor (death by hunger) was a state-organized death that consumed millions of Ukrainians in the 1930s, as was the Holocaust of the Jews and the Porajmos (Devouring) of the Roma and Sinte people in the 1940s.  Stalinist terror likely killed 20 million; famine from China’s Great Leap Forward may have killed 50 million, but the New World Event was more horrible.

What draws humans to participate in these horrors?  German theologian Karl Jaspers called it the banality of evil–an idea developerd by writer Hannah Arendt.  No Satanic or Mephistophelian types are necessary, just thoughtless functionaries anxious to keep their jobs and retire comfortably, blinkered to the horror they cause.  The realized phantasmagoria becomes itself an inchoate mystery.

It continues today as development and disease threaten tribes in isolated refugia.  Its scale deranges the planet and darkens modern society.  A vivid example plays out in Seattle.  One of the groups decimated by diseases that continued to reduce native populations until the 1920s was the Duwamish.  Settlers seized the entire Duwamish River watershed, the Duwamish homeland, by legal stratagem.  Of the 30,000 acres the Duwamish occupied, Americans refused to set aside even 120 from the public domain as a reservation promised as a ruse to keep the tribe friendly during the bloody Treaty War of 1855-8.

The Duwamish and their Chief Seattle had invited American settlers in to share in their rich environment, but the Americans found the real estate too valuable to share.  For millennia the Duwamish had flourished with proactive intelligence in the most environmentally complex homeland in western Washington.  It took only three generations to destroy it.

Soon the government forced the Duwamish to choose between two radically new niches: a reservation where they would starve, or a city where they would live by sufferance.  Some left for reservations, but more stayed in their homeland, where by intermarrying and adapting they became urban Indians a century before the term had meaning.  They created a new native identity, still Duwamish even after a government un-recognized them in 1975, claiming that they had developed differently than anticipated, and did not represent those who were first to sign the 1855 Treaty of Point Elliott.

Formally recognized tribes such as the Muckleshoot, Suquamish, Puyallup, and the Tulalip Tribes that have reservations in their homelands fear the Duwamish will build a casino should they win their struggle to regain recognition.  A casino in Seattle, where casinos are illegal, would create a magnet in the richest market. The fear is that such a casino would undercut those in reservations. (It is unlikely that Duwamish would build one.)  Nervous Seattle leaders, fearing loss of generous political donations from recognized tribes, meekly follow, even as they mouth slogans supporting the Duwamish as the city’s First People. They even refuse to seat a Tribal member on the city’s Indigenous Advisory Council.

Seattle politicians also refuse to criticize the Seattle School District’s employment of a curriculum approved by the recognized tribes, “Since Time Immemorial,” which provides generic, anodyne lessons that erase the Duwamish people’s deep imprint on the civic landscape.

And so, the white man’s dirty work continues. As it was in the beginning, the Event persists here.  It continues on Columbus Day celebrations. On the same week, Indigenous People’s Day celebrates skin-of-the-teeth survival by natives. Such is the other side of that terrible coin, the Mysterium Horridum Tremendum.

David Buerge
Previous article
Stealing Fire from the Literary Heavens: My Day with Ken Kesey
Next article
After All This: Putin in Peril? Not Likely