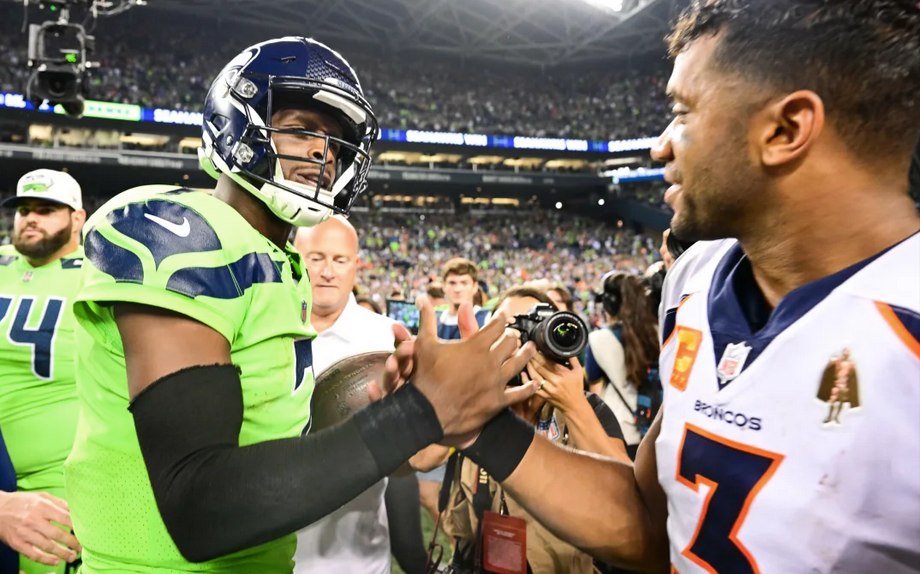 Geno Versus Russ… and the Seahawks Upset Denver

A main reason Russell Wilson wanted to get away from the Seahawks was to find a team that would let its offense run through him. Not throttle him.

But that’s what the Denver Broncos did Monday night – the same sort of approach Wilson resented in his final Seattle years. Instead of trusting their quarterback to win the season-opening game on fourth down in the final 15 seconds, rookie Broncos coach Nathaniel Hackett pulled his superstar, recently rewarded with a $245 million contract extension, and opted for a high-risk, 64-yard field goal attempt. It failed.

Maybe,” said new Seahawks linebacker Uchenna Nwosu, “they don’t trust him in that situation.” Oof. The dagger goes deep. The 6.5-point underdog Seahawks prevailed, 17-16, after the silliest decision since gravel ice cream. Unless, of course, you were Pete Carroll. Then the decision was sunshine, lollipops and rainbows.

“I was surprised they took him out of there,” said the beaming Seahawks coach, beneficiary of 10 years of Wilson’s preposterous late-game wizardry. “Gave us a chance.” National TV cameras captured the stunned look on Wilson’s face as he sat on the opposite sideline of his former Lumen Field home, where for the first time he felt the heat instead of the celebration. The game’s awkward outcome fit an awkward, five-month run-up to the game.

After the NFL in April booked the revenge game as its featured drama on opening weekend, debate raged among Seattle fans about whether to accept the NFL’s most intriguing off-season deal and show Wilson respect for his spectacular deeds, or rain fire. They chose the latter, resoundingly.

Well beyond the standard boos that are delivered to any opponent, Wilson’s pre-game appearances invited magnum disdain. When he took the field for the opening drive, the former Super Bowl champion was caustically villainized. The impact plausibly altered the game. The Broncos were penalized 12 times for 106 yards, including several false starts and delay of game penalties partly attributable to noise. The audio riot may have contributed to the Broncos’ two fumbles at the south end goal line that denied what seemed like almost certain touchdowns.

The Broncos were the first team since the 1987 Chiefs to lose two fumbles from the opponent’s 1-yard line in the same game, per Elias Sports Bureau. “The fans were ridiculous,” Carroll said. “I’m so pleased.”

As was the entire organization. It took on the laborious, controversial decision to trade a premier QB in his prime, knowing they had neither an obvious younger successor on the roster nor a top-tier replacement from a draft that was the weakest in years at the QB spot. Plus, $26 million of Wilson’s contract is charged to the Seahawks under the salary cap as dead money that can’t be used for other players’ salaries.

Persistently, Carroll said after the March 8 trade with Denver that he already had his guy – Geno Smith, the shopworn, longtime backup. Smith showed glimpses in his 2021 stint of three games as Wilson’s injury replacement, but he was neither spectacular nor consistent. Many fans and national media scorned the deal.

It can’t be judged fairly until the Seahawks use Denver’s first- and second-round picks from the 2023 draft. But for a single warm night in September 2022, the Seahawks could check the box marked “early validation.” Except Carroll would not indulge the notion of validation.

“I don’t feel like validation,” he said. “I wasn’t after that. You all might think I should have been, with all this (winning the trade) being talked about. Really, we had a great process to get ready for this game and these guys.” That process produced an efficient stat line from Smith – 23 of 28 passing for 195 yards, two touchdowns and, crucially, no turnovers from him (WR DK Metcalf lost a fumble). In the first half, when the Seahawks scored all their points, he completed 17 of 18 passes.

“Geno was the best he’s ever been,” said Carroll. “He was ready for this game.” Said Smith: “People wrote me off. I didn’t write back.” Wilson meanwhile was good – 29 of 42 for 340 yards and a TD, for a passer rating of 101.3. Smith’s was 119.5, and he also had 14 rushing yards, while Wilson had two, neglecting a part of his game that always distinguished his work.

Notably, the Broncos’ play-calling was conservative, including the two goal-line handoffs that turned into fumbles. Why not leave it in the hands of Wilson? And despite a resolute effort against him by the Seahawks’ revamped defense, why not let your most expensive player handle the final play?

As ever, Wilson refused to offer any public criticism post-game of coach or player. “I believe in coach Hackett,” he said. “I believe in what we’re doing. I believe in everything. Any time you can try to make a play on fourth-and-five, that’s great too. But, also, I don’t think it was the wrong decision . . . If we were in that situation again, I wouldn’t doubt what he decided.”

Wilson voiced similar misdirection when he operated under Carroll. The coach was asked what he said to Wilson post-game at midfield. After a pause, he said, “I don’t really remember . . . ‘nice game.’”

Right. Carroll remembers most everything. At least now, he can forget, victoriously, about this much-typed games. As can fans. Before the game, a couple holding hands walked through Pioneer Square headed to the stadium. The guy was asked about his decision to wear his blue Seahawks jersey number three. He smiled. “It’s got one more wear in it today,” he said. “Then I burn it.”

The therapy around the departure of the best player in franchise history is underway a little faster than expected.

Art Thiel
Art Thiel is a longtime sports columnist in Seattle, for many years at the Seattle Post-Intelligencer, and now as founding editor at SportsPressNW.com.
Previous article
WA Supreme Court: State Not Required to Cut Forests to Maximize Revenue
Next article
Gotta Have a Plan: Are State Republicans Ever Going to Get Their Act Together?