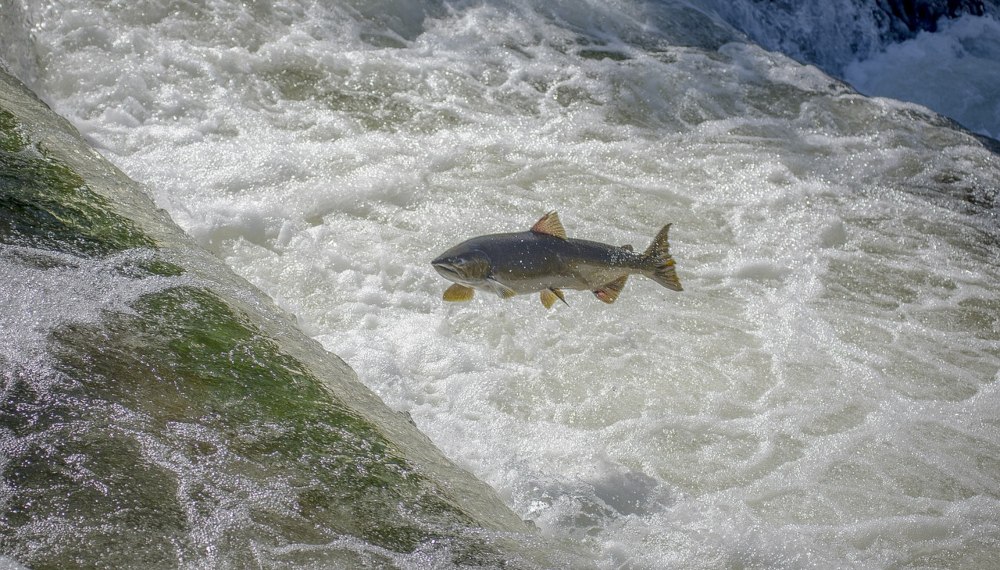 Those sustainably harvested Chinook salmon seemingly legally caught by trollers off Southeast Alaska aren’t “sustainably harvested.”  So ruled U.S. District Judge Richard A. Jones, adding that the plan that has allowed them to be harvested there violates the federal Endangered Species and National Environmental Policy acts.

On August 10, the federal judge granted Duvall-based Wild Fish Conservancy (WFC) summary judgment against the National Marine Fisheries Service (NMFS), its parent Department of Commerce, various officials of both agencies, and the Alaska Trollers Association and the State of Alaska, which had intervened.  Last year, federal judge magistrate Michelle L. Peterson had explored the facts of the case and recommended granting WFC’s motion for summary judgment. Judge Jones accepted her report and recommendations in full.

Threatened Chinook salmon from the Snake River, Puget Sound, the upper Willamette River, and the lower Columbia all swim north along the coast to Southeast Alaska, where they are caught by Alaskan trollers. A lot of people have come to care about Snake River Chinook and Chinook from Puget Sound. They seldom realize that those threatened fish are being caught – legally – off southeast Alaska.

In its press release about Jones’ decision, WFC said, “many people are unaware that only 3% of all Chinook harvested originate from Alaskan rivers, while the majority 97% originate from rivers throughout British Columbia, Washington, and Oregon.” And how could the public be aware? After all, the Marine Stewardship Council has certified troll-caught Alaskan Chinook as “sustainable.” Those fish therefore become unavailable as food for endangered Southern Resident Killer Whales (SRKWs, aka Puget Sound orcas), which are starving.

“A primary limiting factor for the SRKW population is prey availability, which has contributed to premature mortality and reduced fertility,” Peterson wrote.  “While the SRKW consume a wide variety of fish species, 80 to 90 percent of the SRKW’s diet consists of older and larger Chinook salmon.”  When they can get them, that is. Fish targeted by offshore trollers year after year don’t get much of a chance to grow what would historically have been considered old and large.

WFC co-founder and former long-time executive director Kurt Beardslee, who is now the organization’s director of special projects, calls the court’s decision “exciting.”  But he’s sorry that no one covering the decision has pointed a large finger at the U.S.-Canada Pacific Salmon Treaty, which, Peterson wrote, “defines the current management regime for the Chinook salmon fisheries within the [treaty’s] geographical region, including Southeast Alaska.”

The treaty’s whole emphasis, Beardslee says, is on allocating the fish, not conserving or recovering them or species (like orcas) that depend on them. That, he says, makes it ironic that three years ago, Gov. Jay Inslee’s much-hyped Task Force on Resident Orcas recommended that the state “[s]upport full implementation and funding of the 2019–28 Pacific Salmon Treaty.”

In a Biological Opinion (BiOp) on the harvest plan, NMFS acknowledged that the Alaska harvest would jeopardize the survival and recovery of orcas and of Puget Sound, Snake River, and other listed salmon populations.  But, in the traditional hocus pocus that NMFS and other agencies have long used to justify such things, the agency basically said no problem, because we’ll do things to mitigate the effect of the fishing, such as using hatcheries to pump out more salmon, and also improving salmon habitat.

The agency was basically saying, “trust us.” As the judge magistrate noted, there were no specifics, no deadlines, no guaranteed funding.  And some of the actions would be beyond the agency’s control.  Not to mention the fact that more hatchery fish would reduce the survival chances of threatened wild fish. In other words, hocus-pocus pie in the sky.

When WFC gave notice of its intent to sue, it stated in a letter to then-Secretary of Commerce Wilbur Ross, the Commerce Department, and the National Marine Fisheries Service that “perhaps the most egregious deficiency with the 2019 . . .  BiOp is NMFS’s reliance on supposed future mitigation — funding for increases in hatchery production and habitat restoration — that is entirely speculative.”

Judge-magistrate Peterson basically agreed. She noted that the “BiOp relies on uncertain mitigation to find no jeopardy to the [orcas] and fails to evaluate whether the prey-increase program [i.e., the production of more hatchery fish] would jeopardize the Chinook salmon.” She quoted the 9th Circuit’s statement that “Mitigation measure[s] . . . must constitute a clear, definite commitment of resources, and be under agency control or otherwise reasonably certain to occur. A sincere general commitment to future improvements — without more specificity — is insufficient. The measures must be subject to deadlines or otherwise-enforceable obligations; and most important, they must address the threats to the species in a way that satisfies the jeopardy and adverse-modification standards. Binding mitigation measures cannot refer only to generalized contingencies or gesture to hopeful plans. . .”

Those orcas and salmon populations face threats of collective extinction.  If you were facing a threat of personal extinction, would you put yourself in the hands of someone who said hey, I have a hopeful plan?  Or would you prefer someone who offered a plan for something that was “reasonably certain to occur?”