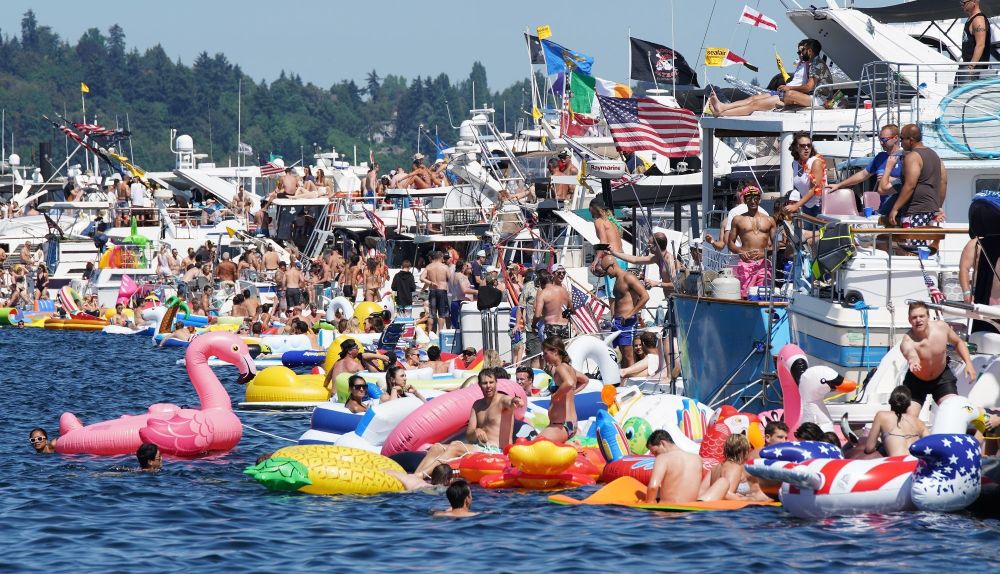 Bored of Seafair? Not When it’s a Poem!

Is Seattle bored with Seafair? After all, Seafair is no longer a novel event. The summer festival is now 72 years old and has changed over the years.  No longer are there bathing suit competitions to choose a Miss Ballard, Miss International District, Miss Rainier Beach and so on.  No longer are there countless ancillary events: open-table tennis competition, a bowling contest and bridge tournament.

The Aqua Theater, built for Seattle’s first Seafair in 1950, is long gone, its concrete risers a mere relic on Green Lake’s Southern shore. Today Seafair has matured but still features traditional happenings like the landing of the Seafair Pirates at Alki Point, hydroplane contests on Lake Washington and – with luck – Blue Angel flybys.

Yes, we still do choose Seafair royalty – a King Neptune and Queen Alycone and Seafair princesses who now are selected for accomplishments rather than for physical attributes. Seafair Inc., a very professional organization, lists past royalty — King Neptunes like Tom Skerritt (2011) and Slick Watts (2012), Queens like Mona Lee Locke (2007) and Chris Gregoire (2014). There is still Fleet Week with visiting naval vessels and quirky competitions like the Milk Carton Derby at Green Lake.

Downtown’s Torchlight Parade – floats, drill teams and mounted units — still functions as the summer festival’s centerpiece, attracting several hundred thousand spectators. True, the bidding wars of yesterday, are past, years when KIRO-TV competed with other Seattle television stations and paid handsomely for the exclusive right to carry the event.

It’s fair to point out that boredom, real or feigned, has been an on-and-off feature of Seafair. Any trip through the Seattle Times archive (accessed through the Seattle Public Library) shows wavering affections. In 1986, Times editorialist John Hamer revealed the result of the paper’s “dullness contest.”  The survey ranked the dullest personalities (then Gov. Booth Gardener, Mayor Charles Royer and Sportscaster Wayne Cody) as well as dullest events: (1) Seafair, (2) Fat Tuesday and (3) Seattle Mariners games. (Fat Tuesday is no longer celebrated here due to the 2001 riot and tragic death.)

Seafair had other disparagers. Take Seattle Times columnist Robert Nelson, writing in July, 1986.  He asked: What do you make of a citizenry that buys more books per capita than any other city and then gets totally blitzed on something as raucous and gaudy as Seafair? ”It’s like Prince Charles getting caught with a hooker or Nancy Reagan showing up in black leather.”

Publisher David Brewster wrote in the Seattle Weekly about “the idea of Seattle killing off Seafair and replacing it with a summer strategy for Northwest Arts.” The Seattle Times’ Eric Lacitis cited an unnamed P-I writer who argued that it was “time to ditch the Seafair Pirates and their silly costumes and embarrassing little charades.” (In the 70s, the Pirates had been barred for piratical behavior: faux kidnappings and targeting young women. They were finally reinstated after rebranding.)

There is no doubt there were and are Seafair cynics, many found in newspaper ranks. My favorite story about the lengths to which newsies will go to avoid covering Seafair stars Seattle Times’ reporter Dick Clever. The city desk sent the grumbling Clever off to cover the 1985 Torchlight Parade with strict instructions to file by the 11:30 p.m. deadline.

Clever started out at a local bar and never got around to leaving. Instead of the expected colorful story about the 130-unit parade watched by 250,000 spectators, Clever showed up minutes to spare and handed city editor Elouise Shoemaker the rhyme he’d scribbled while indulging. Elouise had no choice but to run Clever’s doggerel. The morning of Aug. 3, Times subscribers opened the front page to a 35-line ditty that began:

“The parade, the parade;
What a spectacle it made.
First the police cyclists
Roared down the street,
Their precision routine brought
Folks to their feet.”

Then came more cops on horses
From B.C. and here
Firemen, boatmen and Navymen (cheer!)
Marshals, type Grand, followed the band,
And commodores, white-suited,
Pirates, jack-booted,
Clowns, faces-sooted,
All got a hand.

There were guys in buckskins,
Bagpipers in kilts,
Hydroplanes, sailors and
Horses in quilts.
Chinese girls marched,
Pinoy kids drilled.

They came from Marysville’s Strawberry Fest
The Shady Ladies of Wrangell came along too.
Portland, Lynnwood and Victoria, I say.

Musicians from Aberdeen,
More horses, more marchers,
And Ballard Eagles,
What a team.

Lake City’s Vigilantes,
Looking ready and rough,
On and on they went
Into the night.
The annual Seafair Parade,
Torchlight.”

Today the Torchlight Parade and Seafair are back, post-covid, popular as ever with fans. The summer festival is part of Seattle’s identity and so are memories of Seafair yesterdays. Dick Clever’s old colleagues can still quote the first lines of his poem and laugh realizing that Dick, now retired and living in Hawaii, missed the parade once again.

Jean Godden
Jean Godden wrote columns first for the Seattle Post-Intelligencer and late for the Seattle Times. In 2002, she quit to run for City Council where she served for 12 years. Since then she published a book of city stories titled “Citizen Jean.” She is now co-host of The Bridge aired on community station KMGP at 101.1 FM. You can email tips and comments to Jean at jgodden@blarg.net.
Previous article
Johnson’s Ghost: The Vanishingly Small Number of Brits who will Choose the UK’s Next PM
Next article
A Less Christian Nation…