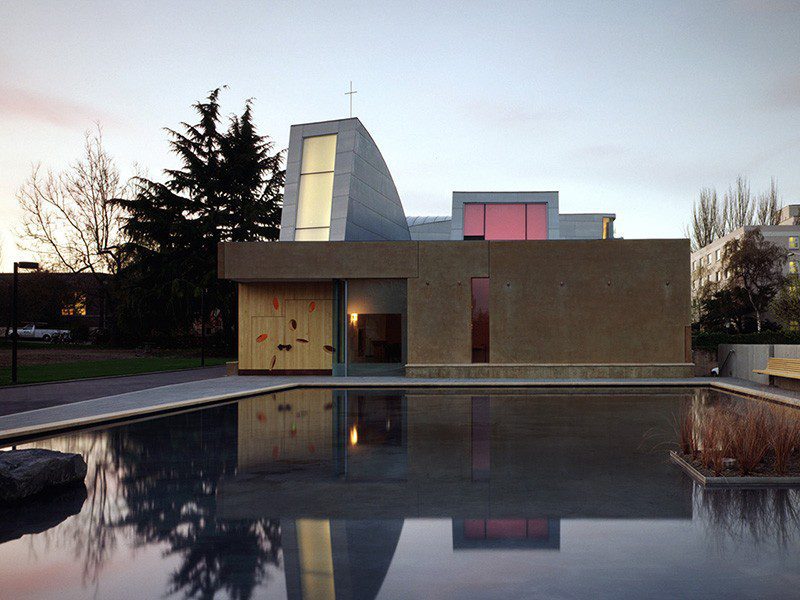 Seattle is a good place for architecture, with widely recognized modern landmarks. Even more important, it has great architecture clients.

The city itself has been one of those clients. In the mid-nineties, after it had completed a few small historic Carnegie Library renovations in Seattle neighborhoods, the city advertised the downtown site of its central library in an international design competition. The response was strong. The final selection process was a public event and Stephen Holl came to Seattle to compete for the design of the downtown library. After several stages of review, though, the winner of the contest was Rem Koolhaas, a Dutch citizen with a name that was identified with architecture. The Seattle Public Library is now a modern landmark.

Holl returns to speak at the library on Friday, August 5, at 4:00. He will discuss a theoretical text Questions of Perception he authored with Alberto Perez-Gomez and Juanita Pallasma in 1994. The book consists of three essays examining the “role that human perception and phenomenological experience play in architecture.”

Holl’s Chapel of St. Ignatius has been a design landmark since its completion in 1997. The Seattle University building is considered one of Holl’s best works and this year the American Institute of Architects bestowed it’s 25-year award on the project. The changing light and shadow on the textured surface of the concrete has always been an enigmatic feature, but it also reflects metaphors used by its namesake, the founder of the Jesuits. It was reflected by architect Stephen Holi in his concept: Seven Bottles of Light.

Projects suited to his talents are mostly arts and educational institutions, along with public buildings like libraries and housing.  After decades in pursuit of commissions around the world, Holl seems to be better understood in Seattle than he was when he designed the chapel and a second project here, a small art museum in Bellevue.

Back then, clients in the Seattle area just didn’t seem ready. At the time Bellevue Art Museum was planned, Holl was already known for the Chapel of St. Ignatius. The new home of the expanding community institution was not intended as a gallery where a painting can be visited or stored.  BAM had no real collection of its own.

BAM picked Holl to design the new building, along Bellevue Way right across from Bellevue Mall. He understood artists. He was one of them, known for his concept sketches and watercolors.

Bellevue, which had begun as a bedroom community with a busy mall, was becoming associated with the tech industry and its wealth. BAM and Holl agreed on an unconventional program that fit his concept for an irregular plan with tent-like volumes. They had no permanent collection to store and would set out to redefine art as a changing, ephemeral field. Their freestanding museum would attract visitors with its visiting shows and virtual originals such as projected images. Original videos could be projected on walls, both inside the museum and outside.

The museum was built, but the new turnstile hardly moved. The organization floundered. Holl’s sculptural building bore part of the blame. As if to prove his original point, Holl returned to Bellevue in 2020 when BAM hosted a retrospective on his career, consisting mostly of video and models. True to the original concept, the exhibit hardly touched the outer walls at all. Certain graphic elements such as photos focused on Holl’s early life in Bremerton were mounted in adjoining rooms. I reviewed the exhibit in Post Alley.

Works of Stephen Holl and surveys of his work are available at Peter Miller Books in Pioneer Square, including reprints Paralax, (Princeton Architectural Press, 2000) and Scale (2011, Lars Muller Publishers). Peter Miller Books is co-sponsoring Holl’s appearance along with space.city.

Clair Enlow
Clair Enlow is a freelance journalist writing about architecture, planning and history. She’s a Loeb Fellow and an honorary member of AIASeattle.
Previous article
The Memes That Maim: Seattle at the Crossroads
Next article
Johnson’s Ghost: The Vanishingly Small Number of Brits who will Choose the UK’s Next PM