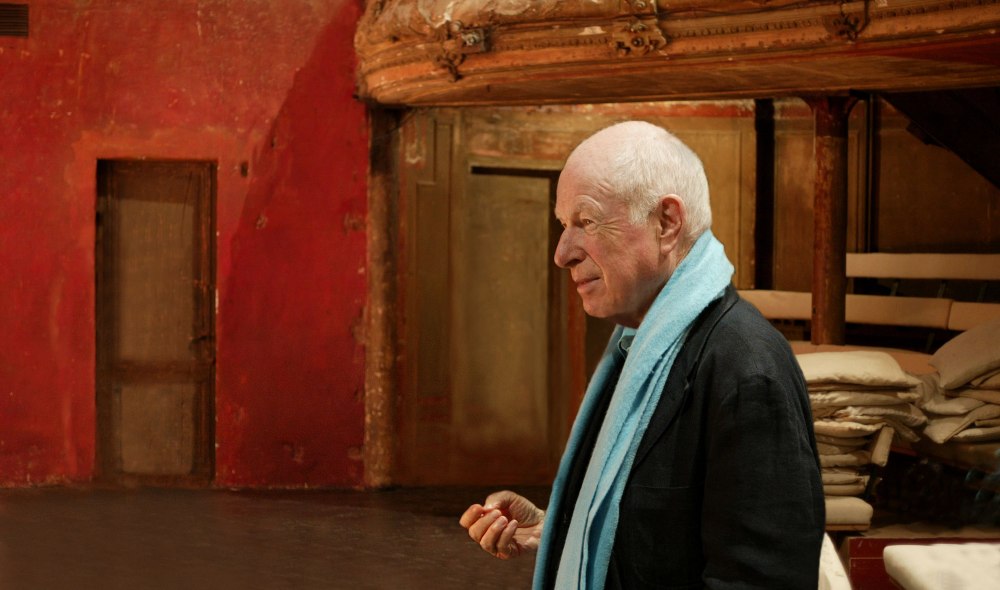 When writer-director Peter Brook died July 2, the reaction of the theater-arts establishment was immediate, universal, and fulsome: a little much even for someone like me, whose whole life was shifted off its rails under his influence.

Brook’s misfortune as an artist was success: too much, too incessant, too routine. Born of cultured secular-Jewish Latvian emigrés, growing up in the idyllic London suburb of Chiswick, he followed a century-old path to assimilation: the Westminster School, Magdalen College, Oxford, an admired undergraduate production of Marlowe’s Dr Faustus so magisterial that when Barry Jackson decided to retire after 40 years leading the legendary Birmingham Repertory Theatre, he chose Brook (then age 20) to be his artistic successor, calling him “the youngest earthquake I have known.”

The Rep engaged Brook’s exclusive attention for just one full season.  His work soon drew critical and commercial praise in the West End and on Broadway. The great nationally-subsidized stages, the National Theatre, the Royal Opera and Royal Shakespeare Company were next to fall. With no British turf left to conquer, Brook took on the world at large.

He founded a multilingual, multi-disciplinary, multi-ethnic performing troupe which toured North Africa to show the villagers how it ought to be done, then decamped for Persia for a 10-hour stage adaptation of the Sufi poem The Conference of the Birds under the patronage of Iran’s new dictator Shah Reza Pahlawi.

But he finally came to roost when France offered him a permanent home and stipend for his non-profit umbrella, the International Centre for Theatrical Research. And there, in the tastefully ramshackle shabby Bouffes du Nord, he continued to accumulate merit and repute until the day he died at the age of 97.

Too much emphasis on the colonialist and patrician side of Brook’s triumphal march into the record books? Maybe I feel that his evolution from theater innovator to theater guru was overlooked in the many tributes to his genius.

And maybe too I’m a little ashamed of the way I uncritically drank of his elitist views back when I was a sprout and he was already shaping up nicely to be the preeminent sage of 20th century theater.

In 1965, the commercial competitor of the stately BBC, Grenada Television, commissioned Brook to give four public lectures on the art of theater. Three years later, they were published under the title The Empty Space. The book offered a highly opinionated analysis of the then-state of the art of drama as a contest between “Deadly Theater” (pretty much everything being produced at the time) and more aspiring, vigorous genres labelled “Immediate”, “Rough” and “Holy.”

As analysis, the book now seems pretty thin gruel beside Northrop Frye’s roughly contemporary Anatomy of Criticism. That didn’t matter. If you were young, ambitious and restive, you only had to read the first two sentences of Brook’s book to get you moving:

I can take any empty space and call it a bare stage. A man walks across this empty space whilst someone else is watching him, and this is all that is needed for an act of theatre to be engaged.

As dogma, a little thin; but that’s not how we read it at the time. We saw it as permission: Never mind the machinery of ropes and pullies, stage management and box office, critics and publicity. Theater is you and a few friends making something and hoping that someone else will find it interesting enough to stop to watch it.

I was one such reader. Another was M. (for Milton) Burke Walker, a recent graduate of Vermont’s Middlebury College, who had come to Seattle to get a master’s degree at the University of Washington’s School of Drama.

The tenured faculty of the UW Drama School at the time were nothing special. The new head of the program was something else again. Gregory A. Falls came to Seattle in 1961 with high ambitions. He established a doctoral program in theater studies and a three-year MFA program to equip gifted students with the skills required to maintain a career in show business. He also started an off-campus professional company (A Contemporary Theater) to complement the more classically-oriented offerings of the two-year old Seattle Rep.

Falls hired two wildly contrasting artists to run his new venture. W. (for William) Duncan Ross already had a formidable reputation as a teacher of acting at England’s Bristol Old Vic School; Arne Zaslove had trained in the highly physical alternative tradition of masks and mime. The graduates of the Professional Actor Training Program were as eager to don the clown’s red nose as Hamlet’s tights. The “empty space” preached by Brook was their natural playground.

That was some time ago, of course. 50 years or so. It’s probably just as well that alumni of the formal entity called The Empty Space Theater decided to hold a reunion this week, while there still are some survivors to celebrate.

One who didn’t quite make it through to toast old times was John Aylward, a member of that first graduating class and a founding member of The Empty Space acting company.

He also was the first to graduate to Actors Equity professional, and ultimately to continuing television roles (like E.R.’s Dr Donald Anspaugh), while continuing to live in Seattle until the day he died.

He also gave the performance of a lifetime, on stage, in Seattle, at the Empty Space Theater, playing a German working stiff whose life falls apart when his assembly-line job is eliminated.

When I was asked to write about the death of Peter Brook, I found myself thinking about John’s performance as hapless Otto Meier, about a great actor finding painful truth with a clown’s insight. I realized Peter Brook’s tragic flaw: no sense of humor. And I remembered John’s assessment when asked if he recommended seeing Mensch Meier: “Three characters . . . three acts . . . three hours . . . three laughs . . . .”

Roger Downey
Born in Canada moved to Peru's altiplano at the age of six; came to the U.S. at 10 to discover that you don't use your feet to dribble the ball. Learned from the git-go that "America" is an idea, not a place.
Previous article
Sleepy No More: A Primer on Tuesday’s Primary
Next article
The Memes That Maim: Seattle at the Crossroads