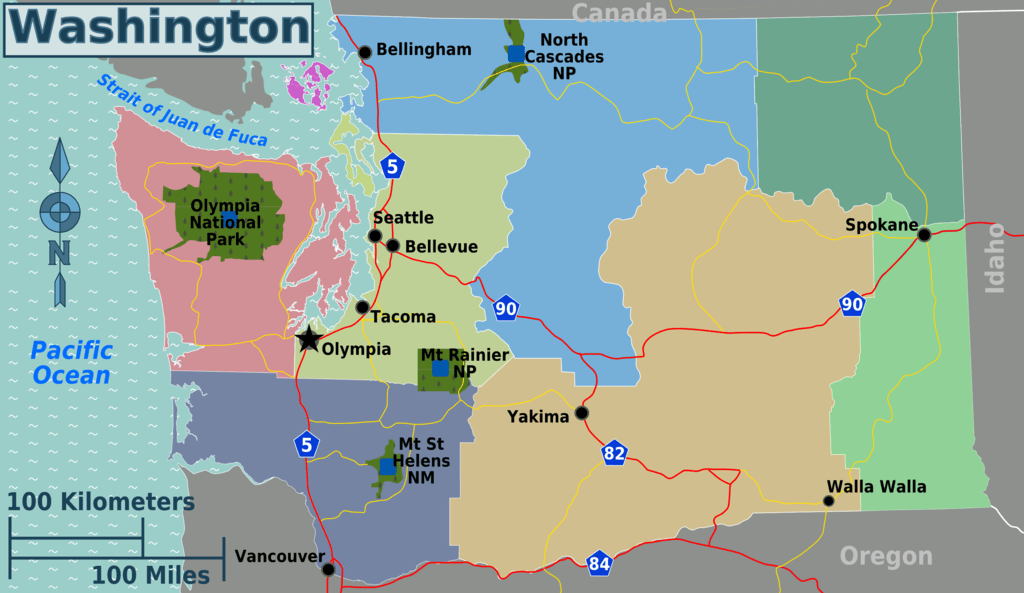 Sleepy No More: A Primer on Tuesday’s Primary

Politicians live to lay on the tributes, and true to that cliche 40th District seatmates were using a Zoom fundraiser to sing the praises of targeted, green State Rep. Alex Ramel, D-Bellingham. Suddenly there came a familiar voice in the background: “This is Jay Inslee on the line. Can anyone hear me?”

The Governor was again intervening in a Democrat vs. Democrat contest.  He campaigned against 5th District Sen. Mark Mullet, D-Issaquah, in 2020, a contest in which Mullet prevailed by fewer than 50 votes.  He is now boosting Ramel, an outspoken advocate of electric cars and foe of using fossil fuels to heat buildings. Ramel is being challenged by building trades union representative Trevor Smith. With no Republican running, corporate and conservative PACS have committed $150,000 to support Smith.

“I cannot overstate how important it is to have (Ramel) in the Legislature,” said Inslee, “and that is why he’s such a target. They understand how effective he is.”

The race shows how politics in one corner of the state can change.  A half-century back, a conservative Democratic legislator from Bellingham led opposition to GOP Gov. Dan Evans’ initial package of environmental laws. (They found a cushy job for the guy at a Ferndale refinery.)  He was taken out by a pro-Evans Republican in the next election.

Our state’s September primaries used to be sleepy affairs.  A summer “Flacks and Hacks” party, hosted by journalist Rebecca Boren and political activist Sue Tupper, was held so campaign handlers could talk to each other since voters were tuning out the election. The stakes seemed far away during a season when the Northwest is a region surrounded by envy.

It’s different this year.  With a lot of “safe” one-party districts, and a wide-open top-two primary shifted to August, many battles pit Democrat against Democrat and Republican vs. Republican.  The reelection races of two Republicans who voted to impeach Trump are a national model of battles within the GOP, and how to survive wrath of the ex-president. Here are some battles to watch:

Republicans have hoped to put the seat of 30-year incumbent Sen. Patty Murray into play.  The GOP challenger Tiffany Smiley is blanketing TV with smiley spots that say little of her issue stands.  She is bombarding donors with email fundraising blasts at a rate of 3-4 a day – including one at 6 a.m. Sunday — using a familiar consultant tactic of faux desperation: “Unfortunately, my opponent has an overwhelming war chest with MILLIONS flooding in from top Democrats, billionaires and special interest groups.”

Murray seemed insular and vulnerable earlier this year. By overturning Roe v. Wade, however, the U.S. Supreme Court has stirred passions in Murray, a politician for whom women’s health has been a cornerstone issue.  She has sought to define Smiley before Smiley got to the task.  A late wrinkle came when Smiley stressed veterans’ issues. Awkwardly, Republican senators last week blocked approval of legislation that would help vets exposed to burn pits and toxic chemicals.  Several Smiley endorsers were among those who obstructed floor action.

What to watch for:  Will primary returns show Smiley in striking distance, and if not will Republicans take their dollars elsewhere?

Pickoff territory here.  The Republicans are going after incumbent Democrats Sens. Claire Wilson and Emily Randall, while up north Democrats have targeted the 42nd District State Senate seat held by the late Sen. Doug Ericksen, R-Ferndale. In the 42nd, Republicans came up 46 votes short in 2018.  Ericksen later died of Covid, and a Democratic-dominated Whatcom County Council gave his seat to 22-year-old Simon Setzik, a White House intern during Trump’s last year in office.  He is being opposed by a fellow Republican, Whatcom County Councilman Ben Elenbaas.

In that Senate race the Democrats are running State Rep. Sharon Shewmake, a Western Washington University economics professor who has helped flip the 42nd to the Democrats.  Lots of money is being spent in that district, and the Republicans are deploying a tactic they earlier used against Ericksen challengers — spending six figures on early anti-Shewmake hit mailings. .

A lot going on in the Northwest “Fourth Corner” part of the state.  House Minority Leader J.T. Wilcox, R-Roy, has fielded star challengers in the swing 42nd and 10th Districts.  (I vote in the 10th, which embraces Island County and hunks of Skagit and Snohomish.) In 2020, the Republicans fielded an attractive young lawyer, Greg Gilday, to hold the 10th District. This year, Democrats have found a challenger in Clyde Shavers, a Navy veteran turned Yale Law graduate. More evidence that we get quality candidates in the 10th District.

Wilcox has done his job on House recruiting with a statewide range of candidates that includes women, minority women, successful businesswomen, and police officers.  It’s the party’s best legislative ticket in years. The Republicans need to pick up eight seats to gain a tie in the Legislature’s 96-seat lower chamber.

The Republican leadership is privately hoping to rid itself of a nuisance, 39th District State Rep. Bob Sutherland, R-Granite Falls.  Sutherland is temperamental — Wilcox reprimanded him for berating the House chief security officer — and Sutherland tried to bill taxpayers for a trip to South Dakota where the MyPillow guy was presenting “evidence” that the 2020 election was “stolen.”

Sutherland is being challenged by a fellow Republican, Sam Lowe, a member of the Snohomish County Council and former Lake Stevens City Council president.  Lowe would be far more competent and presentable.

Brawls here, but not between the parties.  If you can endure the shouts and distortions, tune in Fox News to watch the TV ad battle between Reagan Dunn, Jesse Jensen, and Matt Larkin — the three Republicans vying to take on U.S. Rep. Kim Schrier.  The fur is flying over who is most conservative, with Jensen vowing to introduce an impeachment resolution against President Biden.  A pediatrician before her election in 2018, Schrier is the reassuring centrist, stressing choice and such issues as lowering the price of insulin (she is diabetic).

In the meantime, as detailed in Post Alley by Paul Queary of Washington State Wire, leave-no-footprints PACS are directing heavy negative advertising at right wing challengers. In the 3rd, Trump has endorsed ex-Navy SEAL Joe Kent and hosted a Kent fundraiser at Mar a Lago. Yet, a much-aired TV spot depicts Kent as a registered Democrat in Oregon and one who backed Bernie Sanders and wants to cut the police. Lots of money is being spent in Central Washington’s 4th District against Loren Culp, the former Republic, Wash., police “chief” who was Republicans’ hapless 2020 nominee for Governor.  He’s one of a trio of MAGA challengers to Newhouse.

A trio of Democratic workhorses in the Washington delegation – Reps. Adam Smith, Derek Kilmer, and Rick Larsen – face primary opponents from the Democrats’ far left.  A notably contentious hopeful, Jason Call, hopes to make it past the primary and become Larsen’s general election opponent.  Such is politics in Bellingham that activists jeered Larsen at a Whatcom County Courthouse meeting days before he voted AGAINST the Iraq war resolution.

Smith is chairman of the House Armed Services Committee and joined with military brass in 2020 in backstage resistance against Trump’s attempts to politicize the Pentagon. He led a delegation to Ukraine earlier this month.  He is being challenged from the left by democratic socialist Stephanie Gallardo, who Tweeted the charge earlier this year that the United States manipulated the 2014 “Orange Revolution” that toppled Ukraine’s corrupt pro-Russian president.  She celebrated Independence Day by Tweeting V.I. Lenin’s “Letter to American Workers.”

Many of the contests just mentioned will carry over into November. In Seattle’s very Democratic 36th and 37th Districts, the November contest for open legislative seats will feature two D’s.  There are differences, however, between hard-left policies of Democratic district organizations and candidates who propose making common cause on economic development with legislators from elsewhere in the state.

And here’s a tip to voters of all stripes:  Try to stay off politicians’ email lists.  They’ll make you feel like a hunted animal.