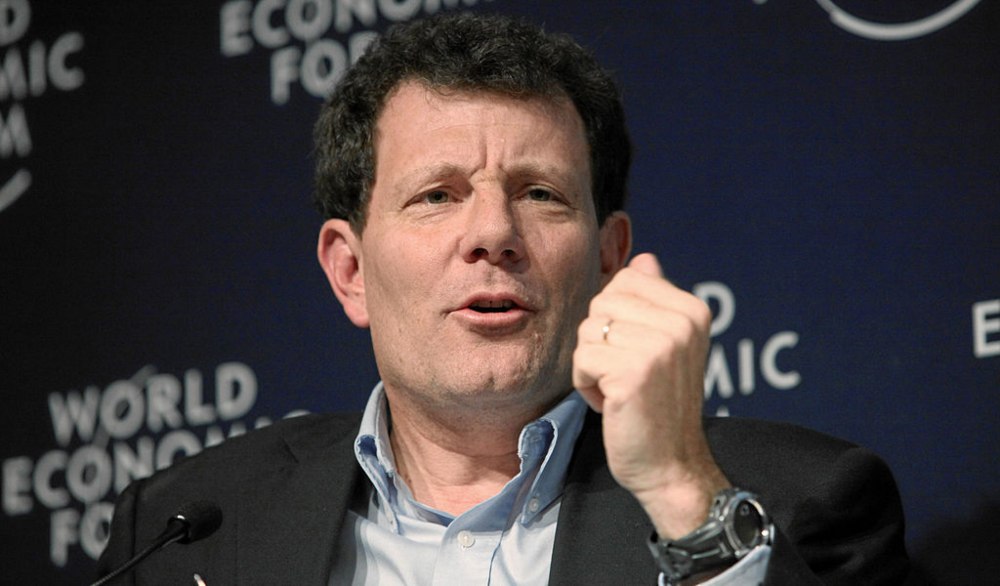 All for Naught? Nicholas Kristof Talks About His Aborted Run for Oregon Governor

We were in Bandon last week when the phone rang. It was my wife’s birthday and we were staying with friends from Bainbridge Island at an ocean-side abode aptly named The Old Rustic Cabin.

The cabin, built in 1934, two years before most of Bandon burned to the ground, overlooks the most magnificent rock formations on the southern Oregon coast.

The place is almost always booked. In fact, it normally takes a year in advance to rent this very modestly appointed joint during summer months.

Trouble is, there is scant cell phone service inside the old cabin, unless one stands in just the right spot in back of the couch in the living room, while simultaneously patting one’s head and scratching one’s stomach, which, as you can imagine, makes it difficult to make or receive a phone call.

So, off I went to Lloyd’s Café in the center of town, a mile and half away.

Lloyd’s is a place where cranberry farmers and fisherman spend most of their weekday mornings drinking coffee and cramming down biscuits and gravy, all the while, shooting the bull about how the Bandon Tigers may fare on the gridiron this fall, that, and of course, gender fluidity.

At 9:30 a.m., my cell phone rang at precisely the prescribed time, and it was Nicholas Kristof.

I’d been trying, mind you, for months trying to get hold of him, hoping to find out what could he have possibly been thinking when he quit his job as a Pulitzer Prize-winning New York Times columnist to run for governor of Oregon.

I mean, my God! Kristof knew full well he had not lived in Oregon long enough (one year) to meet the legal requirements to hold office (three years). And to have voted in New York in 2020, well, it boggles the mind. All told, Kristof’s campaign for governor lasted all of 114 days.

And when in January, Oregon’s secretary of state, Shemia Fagan, a civil-rights attorney with the word vote tattooed across her radius, as New York Magazine noted, ruled him ineligible, Kristof returned to his family estate in the rolling vineyards of Yamhill, Oregon.

The normally mild-mannered Kristof was furious when the decision came down.

“Instead of working to end homelessness, they’re working to end my candidacy,” he said, accusing Fagan of being a part of the “political Establishment.”

Fagan told the Magazine, “Instead of just saying, ‘Wow, this is really shitty! It sucks to have this dream of going out and becoming governor and then finding out that I can’t.’”

On appeal, the Oregon Supreme Court on February 17, 2022, unanimously sided with Fagan.

Kristof called me from his farm and told me he was writing a memoir, a “journalistic memoir,” he described it, and that he intended to devote one chapter, and one chapter only, to his botched gubernatorial bid.

“After I got booted off the ballot my editor (Jonathan Segal at New York City-based Alfred A. Knopf) talked about it again and I made the decision to write it,” Kristof recounted.

‘It’s mostly going to be about my career in journalism. I’m up to the (1991) Iraq War now. My deadline will be sometime in the fall.”

When I asked him whether he tried to get back his columnist job at The Times, a position he held for 20 years, Kristof said rather abruptly, “I don’t want to talk about that, or what I plan to do after the book is published (next spring or summer). But I will likely reengage in journalism – probably on the West Coast.”

Kristof went on. “One of the great advantages of losing one’s job is that you get a lot of job offers.” The 63-year-old newsman, once described as the conscience of a generation of journalists, said he was showered with offers following his forced withdrawal from the governor’s race, such as running a foundation, heading a news organization, and leading a couple of universities. Kristof, understandably, declined to be specific.

“But it is hard for me to give up journalism,” Kristof conceded.

As for politics, “It is unlikely I will do politics again. I got in because I was concerned about Oregon’s direction. There were no incumbents, and I thought Oregon voters were looking for a change.”

On May 19, Kristof, who spent much of his ill-considered campaign railing against entrenched Oregon Democrats, decided to endorse one.

“Oregon faces huge challenges, and we need real leadership. That’s Tina Kotek,” Kristof said in a statement released by Kotek’s campaign. “On housing, homelessness, education, she has actually led and made a real difference for Oregonians. That’s why I’m delighted to support her.”

Asked whether he would campaign for Kotek in the coming months, Kristof replied, “I am constrained by the memoir.”

Kristof acknowledged that he knew of Oregon’s residency requirements before he announced his candidacy for governor in January.

“We consulted with a number of attorneys, election lawyers, and what the lawyers said was the residency requirement is ambiguous and had not been tested. Three other former secretaries of state in Oregon said the same thing.”

As to voting for Joe Biden in New York’s general election in 2020, Kristof said dryly, “That certainly didn’t help. In retrospect, I clearly would not have done that.

“But had I voted in Oregon, would that have made a difference with Fagan? Who knows?”