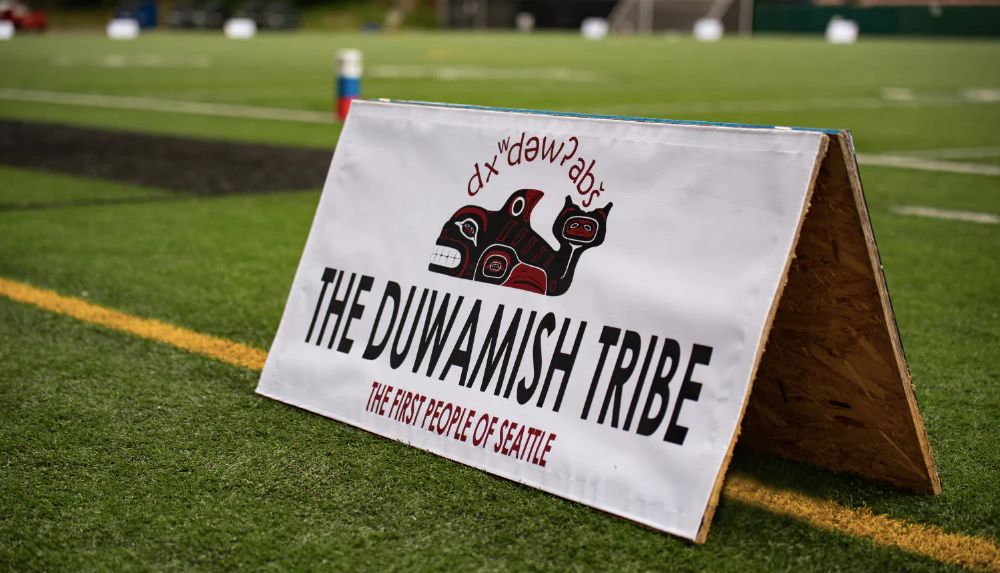 Duwamish people have lived near the river that bears their name and in the city named for one of their leaders, Chief Seattle, for a long, long time.  They lived along the Duwamish River itself, along the Cedar and Black rivers, beyond and to the south of  Lake Washington.  They helped feed the first European settlers.  They signed the 1855 Treaty of Point Elliott.

No one disputes those facts.  They are about as obvious as the longhouse and cultural center that tribal members have erected right across West Marginal Way from the river.  A midden found nearby has been dated back to the seventh century.  People have lived in the valleys for thousands of years.

But this year, on May 11, 167 years after Territorial Governor Isaac Stevens signed the Treaty of Point Elliott with western Washington tribes, a group of Duwamish sued the U.S. Department of the Interior, Secretary of the Interior Deb Haaland, and the federal government as a whole. The suit is an effort to force the government to acknowledge the Duwamish as an independent tribe.

Some people would see acknowledgment and recognition as a step toward righting a historical wrong.  It would also have more tangible payoffs: fishing rights,a stream of substantial federal benefits, the ability to build a casino.

The feds have already refused to acknowledge the plaintiffs as a real tribe.  In 1979, when U.S. District Judge George Boldt – who had ruled that under the 19th century treaties, tribes had basically reserved the right to take half the salmon – was also deciding which tribes had fishing rights. Boldt ruled that the Duwamish weren’t one of those tribes.  In 2015, the government organization issued a notice denying a petition for acknowledgment by the  group, then acting as the Duwamish Tribal Organization (DTO).  Four years later, the feds sent a formal notice that it had done so.

These plaintiffs aren’t the only Northwestern natives still looking for federal acknowledgment.  The Chinook Indian Nation, made up of five Washington and Oregon groups near the mouth of the Columbia River (including the Clatsops, near whom Lewis and Clark spent their miserable winter near the river’s mouth), is in similar straits.

The Duwamish complaint leads with the fact that Chief Seattle signed — or made his mark on — the Treaty of Point Elliott on behalf of his mother’s tribe, the Duwamish, and his father’s tribe, the Suquamish. (Seattle is buried on the Suquamish reservation, across Agate Pass from Bainbridge Island.) The Interior Department acknowledged that signatory, but said that under the terms of the treaty, many of the Duwamish settled on the Muckleshoot and other reservations, leaving no continuing tribal entity behind.

Why no specific Duwamish reservation in or near what is now Seattle?  “Because King County settlers planned to get rich speculating in land during the expected post-railroad industrial boom,” David Buerge writes in an excellent PostAlley piece, “the settlers refused to let government withdraw land for a reservation and blocked efforts to organize a tribal reservation near Renton.“

In recent times, the key question has been not what existed on the ground, or what native observers thought back in the day. It is whether or not a group can demonstrate legal continuity from the turn of the last century to the present.

The feds have argued that the current Duwamish plaintiffs can’t.  They’ve concluded that as a living community, the original Duwamish group dispersed beyond the reservations, as Duwamish women married white men and wound up living in logging camps and communities all over western Washington.  In the government’s view, both “before and after the treaty, [the petitioners’ ancestors] left the tribes as individuals and families . . . . [A]lthough the members descend from a historical Duwamish tribe, the petitioner’s members and their ancestors have not inhabited a specific area or lived in a community distinct from other populations at any time. . . . . [A] predominant portion of the petitioner has never formed a distinct social or geographical community. The petitioner did not present evidence showing a majority of its members undertook joint social or cultural activities, married one another, spoke the Duwamish language, participated in cooperative economic activities, or undertook informal social activities together.”

In short, the Duwamish Tribal Organization “has not maintained a community that is socially distinct from the general populations from historical contact to the present.”

Both the feds and the current plaintiffs have pointed to the turn-of-the-20th-century Duwamish settlement located where the Cedar River flowed into the Black.  The Black, which drained Lake Washington from its southern end, then flowed into the mainstem Duwamish and ultimately to Puget Sound.  The Cedar, which flows from what is now Seattle’s Cedar River watershed, met the Black a little downstream from the lake.  The Cedar was diverted directly into Lake Washington, so that it would no longer flood Renton.  When the ship canal dropped the water level in Lake Washington, that lake water no longer drained south into the Black, and the river simply disappeared.  With no more salmon and no more navigable waterway, the native settlement disappeared, too.

The complaint cites the existence of that settlement as evidence in the chain of cultural continuity.  The federal decision not to acknowledge the Duwamish as a tribe places its disappearance in a chain of cultural discontinuity.  The feds note that “observers . . . identified a Duwamish community at a traditional location near the junction of the Black and Cedar Rivers as late as 1900, but DTO’s ancestors were not part of that community.”

“Multiple sources, including congressional appropriations, have identified the ‘D’Wamish and other allied tribes’ on the reservations, and the subsequently consolidated reservation tribes, continuously since the treaty in 1855,” the feds alleged in 1996. “But these identifications are not of the petitioner. Because the petitioner was created only in late 1925 and is not a continuation of any earlier Duwamish entity, the various identifications of a Duwamish tribe before 1925 do not identify the petitioner.”

The new Duwamish complaint takes issue with that, detailing social and commemorative gatherings held in the late 19th and early 20th centuries, arguing that the Duwamish were matrilineal, so women who married outside the tribe weren’t lost to the community. The complaint not only asks the court to order the defendants to recognize the tribe or, in the alternative, vacate the decision not to acknowledge the DTO as a tribe, and order a hearing on the matter. As another alternative, it asks the court to rule that the federal government has discriminated against a matrilineal tribe and on grounds of gender has deprived the tribe of its 14th-Amendment right to equal protection of the laws.

The feds have alleged a gap not only in cultural continuity but also in tribal governance, arguing that the tribal organization formed in 1925 was merely voluntary, a kind of social club.  “The Duwamish Tribal Organization has not exercised political influence or authority over its members,” says the 1996 Federal Register notice.  “Instead, it has limited itself to pursuing Federal acknowledgment and claims against the United States “

The complaint argues otherwise.  It alleges that the tribe merely renamed its government the Duwamish Tribal Organization.  And it notes that the people who formed the group in 1925 actually drew up a constitution.  But the examples it gives of constitutional provisions, while very community-minded, sound like things a service club – a voluntary group that might meet for breakfast or lunch at a local restaurant once a month – might have endorsed. The group should, for example, “promote and co-operate with efforts [toward a more perfect union] and education development of its members.”  It should also “promote morality and good citizenship of the younger generation.”  Hard not to like the sentiments.  Hard to see them as a blueprint for government.  And the complaint seems to put a little distance between the current plaintiffs and the DTO.  The plaintiff is the Duwamish Tribe, period.

The complaint also cites a series of occasions on which federal courts or agencies have recognized the tribe’s existence.  Among them is the time, as the Clinton Administration was heading out the door, when an acting assistant Secretary as the Interior for Indian Affairs recommended recognition. (The Bureau of Indian Affairs sent out a press release announcing this.)  The complaint doesn’t say – as the refusal to grant recognition does – that the assistant secretary didn’t sign it while he was actually in office.  Also, the new Bush administration quickly reversed it.  Regardless, that was perhaps the high-water mark in this fight for tribal recognition.

The Duwamish Tribal Organization followed the formal process for gaining federal recognition to a dead end.  Now, the plaintiffs are trying an end-run around that process.  We’ll see if the courts buy it.

Or someone else does. The courts aren’t the only option.  Congress could bypass the bureaucratic process and simply acknowledge the plaintiffs as a legitimate tribe. Former Congressman Jim McDermott introduced bills more than once.  It didn’t work.  Would it work better now?  From the vantage point of Seattle’s blue bubble, the political time may look favorable for that kind of thing.  But Congress has a hard time getting anything done, so why should this be different?

Obviously, this year’s legal action is just the latest chapter of a long story.  The broader history isn’t in doubt.  All sides agree on some of the big stuff. But they disagree about how one should interpret or weigh some of the historical facts, much less the gaps and gray areas between them.

If the question of federal acknowledgment gets into the political arena, the debate may be all about historical injustice and identity politics — although, as Lynda Mapes’ sweeping  articles in the Seattle Times make clear, Duwamish descendants on established reservations have their own heritage and justice problems with the current litigation.

“The political reality is that officially recognized tribes fear what could happen if the Duwamish gain tribal acknowledgment. One fear has to do with further cutting up the pie of fishing rights. Then too, government has provided tribes opportunities to join with international gambling operations that funnel what is left after stockholder dividends into tribal budgets.  As a tax-exempt corporation, what would prevent the legally recognized Duwamish Tribe from building a casino in downtown Seattle that would compete with casinos located farther away from the region’s largest market? “

That kind of conflict isn’t unique to the issue of Duwamish acknowledgment.  The Snoqualmie tribe was finally acknowledged in 1999 only after the Snoqualmies overcame legal opposition from the Tulalips.  Whatever else tribes may be, they’re human economic and political organizations, and sometimes they act like it.  This shouldn’t shock anyone.

At its core, this is a conflict over not only material benefits or retroactive justice (which may be an oxymoron) but also over history.  It’s not as catchy perhaps,  or as widely noticed as current arguments about honoring Confederate traitors or soft-pedaling slavery, but it raises some similar issues, and it’s every bit as complex.  No doubt, it’s too convoluted and too nuanced to be taught in schools.  But maybe it’s just the kind of thing that should be taught.

Dan Chasan
Previous article
How J.T. Wilcox Hopes to Hatch a Republican Comeback
Next article
For Your Approval: Does Seattle Need a New Way of Electing Its Leaders?